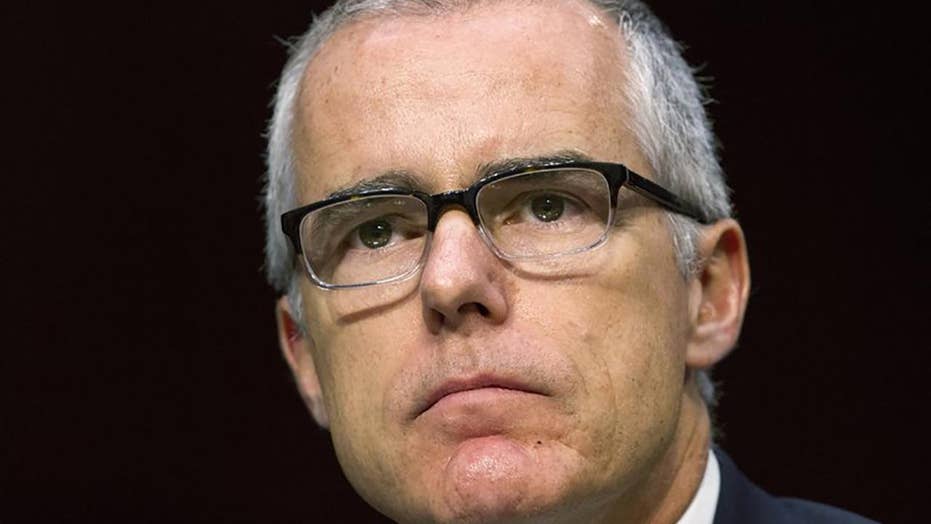 This is a rush transcript from "Special Report with Bret Baier," March 16, 2018. This copy may not be in its final form and may be updated.

SEN. LINDSEY GRAHAM, R-S.C.: We believe the FISA warrant process was abused, and the reason we want a special counsel is I think crimes may have been committed. I want somebody to look at how the FBI FISA application was handled just like Mueller is looking at a Trump campaign.

SEN. CHUCK GRASSLEY, R-IOWA: The inspector general is independent. He just needs some help. We will give him the tools to do it because they cannot be counted on to investigate themselves. It is kind of common sense.

GRAHAM: The FBI and the Department of Justice were corrupt in my view. The entire FISA warrant application process was abused.

BRET BAIER, ANCHOR: Hours after that interview here on "Special Report" and the call for the special counsel, some breaking news first uncovered by Mollie Hemingway at The Federalist about an interesting set of text messages between some figures that we have been following for some time.

July, 2016, the FBI opens its Russian investigation, and text messages indicate the FBI agent Peter Strzok and Lisa Page, they were having an affair, they were talking about a relationship Peter Strzok had with a federal judge, Judge Contreras. And in this it ends up that this is the federal judge who would later handle the prosecution of the former national security adviser Mike Flynn. And it also turns out that he sits on the secret FISA surveillance court.

The text message, Lisa Page, "Rudy is on the FISC, did you know that?" That is they FISA court. "I did. We talked about it before and after. I need to get together with him. He said he had gotten on a month or two ago at a graduation party we both were at. She," not sure who "she" is, "brought up a good point about being circumspect in talking to him in terms of not placing him into a situation where he would have to recluse himself." "I can't imagine either one of you could talk about anything in detail meaningful enough to warrant recusal." Strzok, "Really, Rudy, I am in charge of espionage for the FBI.

Any espionage FISA comes before him, what should he do given his friend oversees them? Standards for recusal are quite high. I just don't think this poses an actual conflict." Strzok says "He is super thoughtful and rigorous about ethics and conflicts." "M," not sure who "M" is, "suggested a social setting with others would probably be better than a one-on-one meeting. I'm sorry. I'm just going to have to invite you to that cocktail party. Have to come up with some other work people to cover for action." Lisa Page, "Why more? Six is a perfectly fine dinner party."

We don't know where that goes, but it raises all kinds of questions about what they were trying to do with the FISA judge and motives behind all of this. Let's bring in the panel: Byron York, chief political correspondent for the Washington Examiner; David Catanese, senior politics writer for U.S. News and World Report, and Jason Riley, Wall Street Journal columnist and senior fellow at the Manhattan Institute.

BRYON YORK, WASHINGTON EXAMINER: It could be a big deal. One of the mysterious events of this whole affair is when Michael Flynn pled guilty on November 30 of last year. The original judge who accepted that guilty plea a few days later is off the case. We don't know if he removed himself or if he was removed, but we do not know. That is a judge we are talking about here.

BAIER: We should also point out that Peter Strzok is the FBI agent who interviews Michael Flynn.

YORK: And everything concerning Peter Strzok is a big deal because of his centrality in the whole Trump-Russia affair. He is the guy who interviewed Flynn, and Contreras, the judge was on the FISA court. We all heard a lot about the FISA court which repeatedly accepted or approved a search warrant for Carter Page. So wondering what is going on there.

JASON RILEY, WALL STREET JOURNAL: You have the judge who accepted Flynn's guilty plea, apparently had a personal relationship with the FBI agents that interrogated him. Moreover, from these text messages, it looks like those agents wanted to exploit that relationship in this case.

BAIER: So we don't know what we don't know, we've said that with the Mueller investigation as well, but listening to Senators Grassley and Graham last night, they know more than they are saying with this list of questions and this letter calling for a special counsel. You add this to what the concerns are that they list and it seems like maybe it is more likely that one comes about.

DAVID CATANESE, U.S. NEWS AND WORLD REPORT: It could, but I think in going back and looking at this time, I think the most troubling part was your point that they didn't share it all with Congress. There is a motive to hide it. And I think that that is always the problem with this cover-up.

Now, to be fair, with the larger Mueller investigation this Mr. Strzok was removed. He did take him off the investigation. And we also don't know if this has anything to do with the material problem here, or the material charge that Michael Flynn lied, right? That is the essence of this case, that he lied to FBI officers about meetings with foreign officials. We don't know if that changes, if this has anything to do with that central charge. That's why he is in hot water.

BAIER: But had he known, Michael Flynn, that is, that the guy that was investigating him and asking him the questions was conspiring and had this political bias and the judge that he said I plead guilty to had the relationship with the guy who asked him the questions, would he have pled guilty?

CATANESE: Good question, I don't know if he would have pled guilty. I think that is a question for Michael Flynn and his attorney.

BAIER: Now there is another question here. Andrew McCabe, we are waiting any minute on a decision whether the administration and specifically Jeff Sessions, the attorney general, will be fire hours before he is scheduled to retire to get his pension. Thoughts on that as we get a decision one way or another before Sunday?

YORK: It shouldn't be ticking down on the clock like this, it does not make sense. But it is the case apparently that the FBI's office of professional responsibility has recommended taking action against McCabe.

BAIER: This is not President Trump.

YORK: This is not President Trump saying I want his head. This is actually the FBI office of professional responsibility. And we do have an inspector general's report coming pretty soon about the FBI's handling of the Hillary Clinton email investigation.

BAIER: Which obviously has something in it if it is triggering all of this call for a special counsel.

YORK: Exactly, and all of these people who were involved, we are talking about with Trump-Russia, they were also involved in the Clinton email investigation.

BAIER: Let me play this sound bite that I thought was fascinating from Jonathan Turley last night with Martha about McCabe and whether he is going to get fired ahead of this retirement or not.

JONATHAN TURLEY, GEORGE WASHINGTON UNIVERSITY: The real strange thing about all of this is that McCabe so far has been worried more about pensions than prison. That is not the choice that was given to Michael Flynn. Michael Flynn, if you recall, was charged with false statements even though Comey's investigators reportedly believe that Flynn didn't intend to mislead them. That is not apparently the conclusion of the inspector general with regards to McCabe.

BAIER: We're going to follow it. So far nothing, no word on anything, whether there are moves in the administration. We have got you covered here.