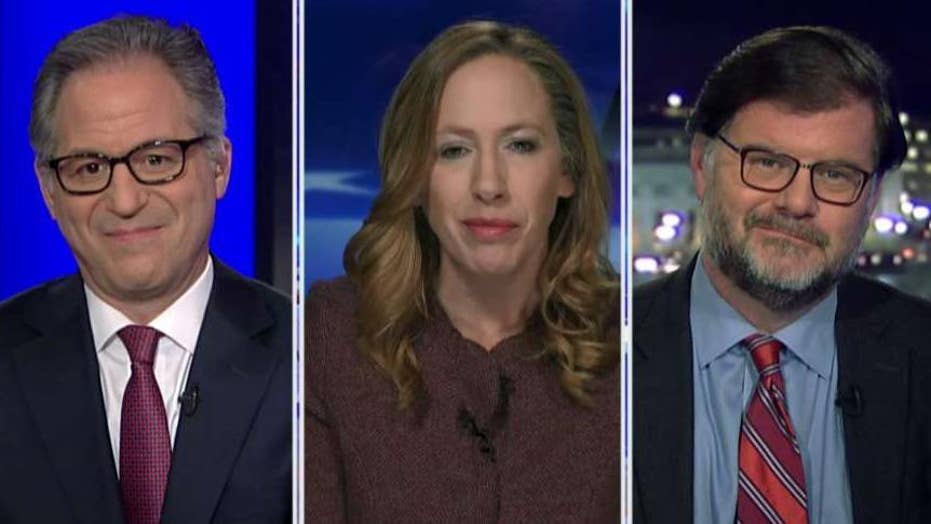 Plus, Charles Lane, Kimberley Strassel and Jonah Goldberg name their Winners and Losers of the week.

This is a rush transcript from "Special Report with Bret Baier," December 6, 2019. This copy may not be in its final form and may be updated.

Reporter Question: Mr. Biden, I was just wondering if you could clarify your remark from today –

Female Speaker: [unintelligible] Thank you so much.

Reporter Question: -- talking to the voter. Did you say "fat?"

Bret Baier: Well, after calling an 80-year-old Iowa voter a damn liar, did the vice president, former vice president also call him fat? That was the question today. We're back with the panel. Jonah, what about this incident -- where Biden stands. And what's happening on the trail?

Jonah Goldberg: Yeah. I think Biden gets a very finite number of passes for this kind of response where he does this moral outrage thing protecting his son. And I think it kind of probably won't hurt him that much. But it does show that he hasn't figured out a better, more substantive reply to this stuff, which is going to come up not just from old Iowan voters, but from reporters until he gets his answers right, and that he can't have one yet is not a good sign.

Bret Baier: Kimberley, we're under two months from the Iowa caucuses, and it seems like the field is as jumbled as ever on the Democratic side.

Kimberley Strassel: Yeah. They're not, I mean, look, we've had people that are dropping out and that is, I think, going to help clarify some things. At the same time, we've had people getting in. Now, we have a Bloomberg. But, you know, one thing that matters is that the overall numbers have been generally consistent in this regard. Joe Biden's still the guy to beat, and that's important.

Bret Baier: All right. This even in California. We can take a trip to Candidate Casino, and we're going to do that right now. You get $100 in chips. You have to bet Democratic primary. We'll start with Chuck. Where's your, where are your chips going?

Charles Lane: California is right next to Nevada. They have casinos all over the place. 30 on Joe Biden, who takes a licking and keeps on ticking just like the old Timex watch. That room in Iowa actually appreciated him, notwithstanding the bad coverage, and then the rest. Pete Buttigieg is now in second place with 25 because of his good poll numbers. I'm putting a little five-dollar piece on a sort of combination. Patrick, Klobuchar, Booker, somebody coming out of the woodwork if everybody else collapses.

Kimberley Strassel: OK. Fifty bucks to Joe Biden. I still think he's the guy to beat, and Democrats like to stick with what they know. So, then I'm doing 20 on Buttigieg, 20 on Elizabeth Warren just because they're both still in the game, and then a 10 for Michael Bloomberg just because I like to cover my outsiders.

Jonah Goldberg: I got Biden at 35 and Buttigieg at 35. Warren at 10. Booker, who I actually think is going to have a little bit of a boom soon, at 10. And Bloomberg at 10, because no one really -- you shouldn't underestimate how much 12 billion dollars in ad buying can get you, and if he's willing to do that, who knows what happens.

Bret Baier: All right. You all pick Bloomberg, which is interesting, at least in some money. We have to have a very quick. Winners and losers. Chuck, Kim, then Jonah. Here we go.

Charles Lane: My winner, Kelly Loeffler, who's been appointed to that open U.S. Senate seat in Georgia. There was a big fight over that between President Trump and Governor Kemp. She won it. My loser of the week, I think, is obvious. Kamala Harris started off with such a bang as a presidential candidate and walked away, so to speak, with a whimper after she just couldn't raise the money and couldn't get out of the doldrums.

Kimberley Strassel: A hit to Jonathan Turley, the Republican witness at the impeachment proceeding this week. It was an uncomfortable place for him to walk into. Given who was controlling the narrative. But he gave a very thoughtful analysis, which is worth reading. And a miss to Adam Schiff for the news, astounding news, divulged this week that he actually subpoenaed the phone calls of the president's personal lawyer, a huge abuse of power and a bad precedent for the future.

Bret Baier: All right, Jonah, wrap this up.

Jonah Goldberg: My losers are Out Magazine and other gay groups who tried to dunk on Pete Buttigieg for supporting the Salvation Army as mayor of South Bend, Indiana, first openly gay major party candidate. And my winner of the week, who Special Report viewers know about as Michael Clarke, the young man who brought his entire kindergarten class to his adoption ceremony.

Bret Baier: That was a fantastic story. Way to end. Panel, thank you very much.