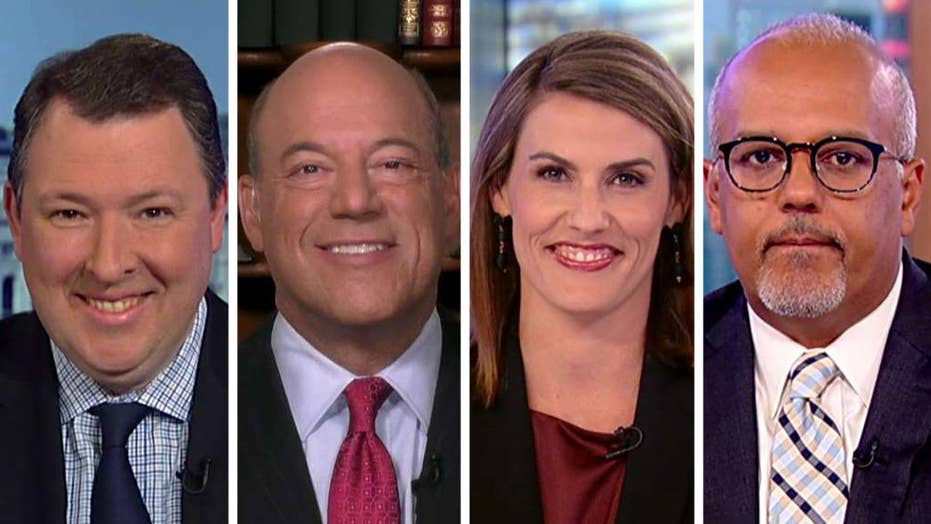 What was learned from the rough transcript of President Trump's phone call with Ukraine's leader?

This is a rush transcript from "Special Report," September 26, 2019. This copy may not be in its final form and may be updated.

DONALD TRUMP, PRESIDENT: The witch hunt continues, but they are getting hit hard on this witch hunt because when they look at the information, it's a joke. Impeachment for that?

REP. NANCY PELOSI, D-CALIF., HOUSE SPEAKER: The president of the United States, in breach of his constitutional responsibilities, has asked a foreign government to help him in his political campaign. He will be held accountable. No one is above the law.

TRUMP: Nancy Pelosi has been taken over by the radical left.

VOLODYMYR ZELENSKY, UKRAINIAN PRESIDENT: It was normal. We spoke about many things. And so I think, you read it, that nobody pushed me.

REP. JERROLD NADLER, D-N.Y., HOUSE JUDICIARY COMMITTEE CHAIRMAN: All I can say is we're going to move on impeachment expeditiously.

BRET BAIER, HOST: Just some of the sound on this developing story. Let's bring in our panel from Washington and from New York, "Washington Post" columnist Marc Thiessen, former White House press secretary, Ari Fleischer, "Wall Street Journal" reporter Shelby Holliday, and Mo Elleithee, executive director of the Georgetown Institute of Politics. Ari, we've seen a lot of things. This is quite something to watch. Ari, you got me?

ARI FLEISCHER, FORMER WHITE HOUSE PRESS SECRETARY: I'm sorry, Bret. This obviously is something to watch. Washington has lost its mind. But let me just at the outset, I do think it is inappropriate for president or a candidate to ask a foreign government to intervene in any way in anything that involves American domestic politics. I didn't like it when Hillary Clinton as a candidate did that involving Russia. I didn't like it when Barack Obama and Joe Biden bid on it and have the FBI investigate Donald Trump, and I don't think President Trump as well when he does it here.

But put it in perspective, Bret. This is a five-year penalty if it was a football game. It's not a 15-yard penalty, and it certainly isn't throw the guy out of the game penalty. I've seen far worse in politics. Other people have done similar things, and that's why this impeachment, it does not rise anywhere close to that level.

BAIER: The press conference this afternoon, President Trump read from what looked like a very familiar op-ed. Take a listen.

TRUMP: It got almost no attention, but in May, CNN reported that Senators Robert Menendez, Richard Durbin, and Patrick Leahy wrote a letter to Ukraine's prosecutor general expressing concern at the closing of four investigations they said were critical. In the letter, they implied that their support for U.S. assistance to Ukraine was at stake, and that if they didn't do the right thing, they wouldn't get any assistance. Doesn't that sound familiar?

BAIER: It sounds familiar to Marc Theissen. He wrote that op-ed.

BAIER: Marc, your point with all that?

MARC THIESSEN, AMERICAN ENTERPRISE INSTITUTE: First of all, I'm glad he's reading "The Washington Post," number one. And number two, the reality is that these Democrats were doing exactly what the accused Donald Trump of doing. They wanted the Ukrainian prosecutor to cooperate with the Mueller probe, investigating their political opponent in their pursuit of impeachment, and they implied that U.S. aid would be at stake if he did not cede to their demands and, in their words, reverse course. So why is it OK for three Democratic senators to urge Ukraine to investigate Donald Trump, but it's not OK for Donald Trump to urge Ukraine to investigate Hunter Biden?

BAIER: Moe, I've said this numerous times today, it depends on how you look at it, what you see in this transcript.

MO ELLEITHEE, EXECUTIVE DIRECTOR, GEORGETOWN INSTITUTE OF POLITICS: Yes. This memo that summarizes the conversation -- it's not a full transcript.

BAIER: The CIA officials who did it in the Situation Room say it's as close as verbatim as it's going to be.

I have a different reading of the Senate Democratic letter than Marc does. What the Senate Democrats said a couple years ago was there is ongoing U.S. federal investigation. You've got some investigations in your own country that are relevant. We're hearing that you may have shut those down because you fear losing foreign aid from the Trump administration. And so we urge you not to do that. That's exactly what it says. I have the letter right here.

And so even then there was concern that the president was doing this, and now he admits it.

BAIER: Respond to that, Marc.

THIESSEN: In the transcript that we saw today, that's exactly what Donald Trump was doing in urging them -- when everyone's been going around saying this whole thing about do me a favor and then jumping to 500 words to look at Hunter Biden. What he was asking the president of Ukraine was to cooperate with an ongoing official Justice Department investigation into the origins of the Mueller probe that's being run by a career prosecutor, John Durham, and it involves looking into with Ukraine the Ukrainian role in starting this.

ELLEITHEE: That has nothing to do with Hunter Biden.

THIESSEN: No, because when you go to all these liberal networks and they are saying he said do me a favor and investigate Hunter Biden, that is not what he said, that is not true. It is completely appropriate for the president of United States to ask a foreign leader to cooperate with an official investigation, and the issue was --

ELLEITHEE: It has nothing to do with Hunter Biden, Marc.

BAIER: He's saying that the transcript goes down that road first, and that's when he talks about it.

ELLEITHEE: Sure, but the crux of this is that he asked the Ukrainian president to step in and launch an investigation against a potential political opponent.

ELLEITHEE: That's exactly what it says.

THIESSEN: First of all, that's not what the scandal was. When you go back to the original "Washington Post" story which broke the story, they said that Trump's interaction with a foreign leader included a promise that was regarded as so troubling that it prompted an official to go to the whistleblower to go to the I.G. There was no promise in the transcript. There was no threat of U.S. aid. That's different.

I agree with Ari that he shouldn't have mentioned Hunter Biden, but there was no corrupt action of trying to threaten their aid if they didn't do what he wanted them to do. That's just not true.

BAIER: Let me come back to where we are tonight. We don't know the exact numbers of House Democrats who are there. Some reports have it up to 213. We do know that it is building, and politically where does that put us?

SHELBY HOLLIDAY, "WALL STREET JOURNAL": It's a little bit too early to tell politically what this means for Joe Biden. I think for President Trump there are obvious risks. There is now a real risk the dam has broken, the House is moving towards impeachment. I think another risk for him is this overshadows his legislative agenda. The "promises made, promises kept" campaign slogan that he hopes to champion. He went on stage today to talk about all the things he'd been speaking with world leaders about. Nobody is talking about that. Everybody is talking about impeachment.

HOLLIDAY: Democrats are very aware that President Trump, however, is good at finding these Achilles heels, exploiting them, turning a minor weakness, or maybe not even a weakness someone thought they had, into a full-blown controversy. And so they are a little bit nervous about Joe Biden and his response. He's been very quiet. He's trying to stay above the fray. Some Democrats want him to come out swinging a little bit harder. If you look at 2016 and how Hillary Clinton responded, and she tried to stay above the fray, that may not bode well for Vice President Biden.

BAIER: let alone where the investigations continue on that side of the coin. Meantime, Ari, "The Washington Post" did have a story that the acting director of national intelligence threatened to resign, they said, if he was not allowed to speak freely on Capitol Hill. However, Maguire puts out a statement and says "At no time have I considered resigning my position since assuming this role and August 16th, 2019. I have never quit anything in my life, and I'm not going to start now." He's going to be up on Capitol Hill. And it's a complete turnaround from the story that got a lot of coverage this afternoon.

FLEISCHER: Yes, it reminds me of when Rod Rosenstein in "The Washington Post" and others reported he was going to resign, and of course he did not, and he denied he ever had thought about resigning. That's the problem with these stories. They just pick up a head of steam, and people don't stop to think if they are accurate or not. And that's what troubles me so much here, the reporting is way ahead of the facts.

BAIER: All right, panel, thank you very much. We'll be talking about this, something tells me, a little bit more.

Thanks for inviting us into your home tonight. That's it for the “Special Report,” fair, balanced, and always unafraid. "The Story" hosted by Martha MacCallum starts after a quick break.