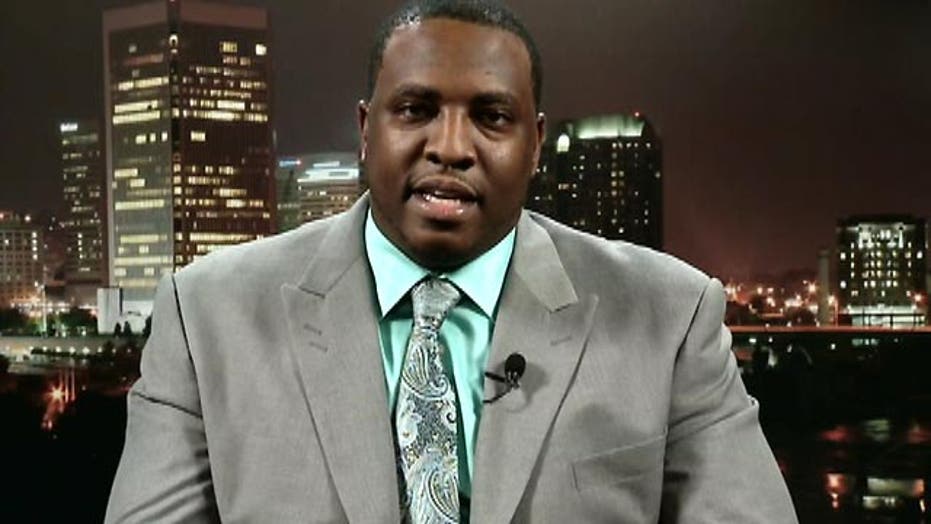 This is a rush transcript from "On the Record," June 18, 2015. This copy may not be in its final form and may be updated.

GRETA VAN SUSTEREN, FOX NEWS HOST: Tonight, the massacre in Charleston, South Carolina being felt all across the nation. And a famous gospel star was so moved, that he took to Facebook. Musician Marcus Stanley posted a comment on the murder suspects Facebook page, Stanley writing in part, "I don't look at you with the eyes of hatred or judge you by your appearance or race. But I look at you as a human being that made a horrible decision to take the lives of nine living and breathing people."

Now he goes on and says, "You have accomplished nothing from this killing but planting seeds of pain that will forever remain in the hearts of the families that lost their lives, and countless hearts around our country."

VAN SUSTEREN: Before I ask you about this Facebook page, and even about your career as a gospel singer, you have a personal story. You were shot, were you not?

STANLEY: Yes I was ma'am. I was shot on April 2nd, 2004, I was shot in Baltimore, Maryland while I was on tour, by no fault of my own. I was confronted by a gang that was doing a gang initiation for one of their members, and I was shot eight times at point blank range.

VAN SUSTEREN: This was your tour as a gospel singer?

STANLEY: Yes. I was actually a musician playing for different artists.

VAN SUSTEREN: All right. Now, tell me, what were the injuries?

VAN SUSTEREN: So then today you woke up, and you saw what happened in Charleston, and you posted on the suspect's Facebook page, why?

STANLEY: Well, I saw it last night, actually, but I didn't have enough details about the situation. So when I woke up in the morning, me and my wife were praying for the people, and the family, and the victims that lost their lives there. And we also went and reached out and prayed for not only the victims, but just the country in general with this terrible violence.

When I went into work to my church, which is New Life Outreach International, I was talking to my co-worker Adam, and he was on the suspect's Facebook page. He just told me about the suspect and I looked him up. I did not plan on reaching out to him, but the fact that he wasn't apprehended yet is -- when I decided to reach out to him instead of -- I asked myself what could I do to make a difference? What could I do in this situation? What could I do to bring some hope? I reached out to him directly instead of putting the post up for my own page. I reached out to him.

VAN SUSTEREN: You write so eloquently and I know you have such a deep faith. And I look at this and I'm so angry I can't see straight. I don't think I could forgive this man. Can you forgive him? Can you reach down in your heart and forgive this man?

STANLEY: Well, I can forgive him because I have been there. It took me a long time to forgive the person that shot me, because I held that bitterness for years. It plunged me into addiction. I got addicted to pain killers, to heroin, and it just progressed when I got shot. Coming out of the hospital, I was a full blown drug addict. And it completely paralyzed my life to the point where I had to go to a program called New Life for Youth, which was founded by Victor and Carmen Torrez, here in Richmond, Virginia. And it was a one-year program. And that's when I encountered god and I finally got the strength to forgive.

VAN SUSTEREN: Well, Marcus Stanley, you are a good man and I'm sorry what happened to you and thank you very much, sir, for joining us.

STANLEY: Thank you. I'm grateful to be with you tonight. God bless you.