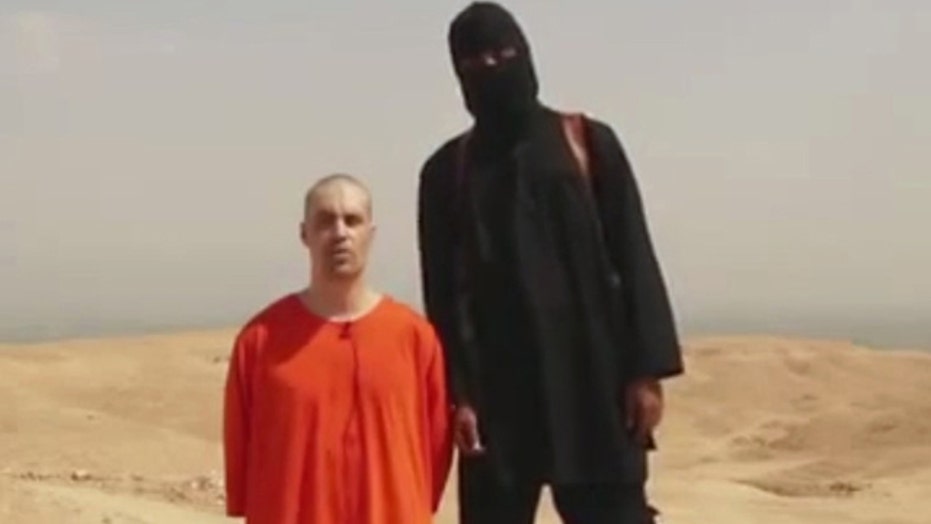 Should US negotiate with terrorists?

POLL: 62 PERCENT SAY GOV'T SHOULD NOT PAY RANSOM TO TERRORISTS FOR HOSTAGES

WAYNE ROGERS: All you do when you [pay ransom] is encourage them to do more kidnapping. Every time you pay, that's how they make money. They're taking ransom. You've got to do something about that. You have to just say to people "if you get caught, I'm terribly sorry. We're going to try, but we're not paying ransom." Remember, the Israelis went they got people out. That's what we have to do. If you're going to rescue somebody, go in and do it with force.

MICHELLE FIELDS: When ISIS asks for money, you don't send money; you send troops. You send troops to destroy them, and get back our people. We need to show these terrorists that when they kidnap and Americans it does not result in monetary compensation; it results in swift retaliation. We are not going to subsidize, because that's what's happening. Subsidize their atrocious, evil acts by giving them money. There's a reason why Al Qaeda targets Europeans; why they kidnap Europeans all the time. It's because Al Qaeda knows that European governments will pay the ransom. European governments have given Al Qaeda $125M since 2008. They are basically giving them money to continue to be awful, evil people.

JUAN WILLIAMS: I wouldn't negotiate with terrorists, but let me just say that when it's personal, Eric, it becomes a different issue. If someone in the corporation, in our company-Dan Rather wasn't speaking universally there. He was talking about if someone on his team, on his network who works for him was kidnapped. I'm not sure O'Reilly would pay to get me back, but I'm glad to hear that Dan cares about his people.

JONATHAN HOENIG: You cannot negotiate with brutality. You can't negotiate with savages, Juan. I don't care how old they are. Paying ransom, or engaging these prisoner swaps only encourages them. It rewards them. In fact, it morally sanctions these savages. Wayne, you mentioned Israel. You know these Islamic attacks against Israel have only gone up since 1993 when they started this whole prisoner swap business. Eric, I agree with you. The Bergdahl situation only enflames and encourages the Muslim street to rise up against the U.S.

MICHELLE FIELDS: We're the ones who are going to have to pay for all of this. Our education system is already failing right now. We're ranked 32 internationally when it comes to math. So our school systems can't even function right now with the students that we have already. Take into account that all of these young illegals that are coming are not going to have guardians; are not going to have parents making sure that they're getting their homework done. This is just going to completely crus our system. Remember, there are tons of reports that these processing centers that are on the border are filled with young people who have TB, Measles. They are getting these diseases, and then they're going to go to our schools? Are we going to vaccinate them? Who's going to pay for all of that?

JUAN WILLIAMS: This is what our public education system was created to do: educate newcomers and make them American. Let me quote George Will, no commie-pinko lib, right? George Will said, "Welcome to America. You're going to go to school and get a job." Rick Perry, governor of Texas back in 2011, when people said, "Oh let's not have in-state tuition for illegal immigrants." What did Rick Perry say? He said, "Welcome to America. Anybody who disagrees with educating people really prefers to pay for them when they don't have a job and are in jail."

JONATHAN HOENIG: I think unaccompanied minors with no money, no adult supervision, to Michelle's point, should not be permitted to stay; and I'm an advocate for open borders and open immigration. But open immigration doesn't mean a right to other people's stuff. An unaccompanied minor really is just a parasite. Even back in the late 1800s people had to have sponsors; they had to have a place to go. The real issue here is schools should be privately funded. Unfortunately, these public schools have to take all of these kids.

WAYNE ROGERS: We can't afford it, number one. We've spent so much money on education and it's failing as it is. That's the first point. The second point is, when you start, as I've said ad nauseam, when you start a sentence with the word "illegal," why should they be here in the first place? You should send them home. If they're illegal, they're illegal! If I rob a bank I'm illegal; I'm violating the law. If you're violating the law, you don't get your citizenship. There is a way to do this properly, and that is the way it should be done.

WAYNE ROGERS: The abuse that goes on, as you said, there's 130M households -- you also have all of these federal agencies involved -- 97, I think, in total. They're giving away taxpayer money. The abuse in it is enormous. The people that are on the dole are enormous. We have created this, and there's no going back. There's nobody who's willing to stand up and say, "Wait a minute, you shouldn't be doing this."

MICHELLE FIELDS: We spent $900B in 2012 on these Welfare programs. The left likes to say it's because of the bad economy. 4 million people were added on to welfare since the recession, and it's not doing anything. The poverty rate has remained relatively the same since the 1960s when the "War on Poverty" started. So what is the point of all of this?

JUAN WILLIAMS: This is so maddening to me because you guys should be mad at corporate inversions, and corporations that don't pay taxes -- one out of every four. Thirteen percent is our overall effective tax rate for these corporations, one of the lowest in the world, yet you pick on the poor. Let me just say, if you look at this as a matter of entitlements, then you talk Social Security and Medicare, but you're not. You're just talking about means-tested programs that give to the poor. And remember, since 1996, Newt Gingrich, Bill Clinton -- tough requirements. You've got to work to get this.

JONATHAN HOENIG: Juan, let's say you are in need. Would it be okay to knock on your neighbor's door and demand $2,000? Probably not, and it's not okay when government does it either. This issue isn't, "Should we help people in need?" The issue is, "Do they own you? Do they have a right to your life?" Someone else's need is not a claim on your life. Juan, if you want to help them, you should, but to use government force is immoral, wrong and destructive.