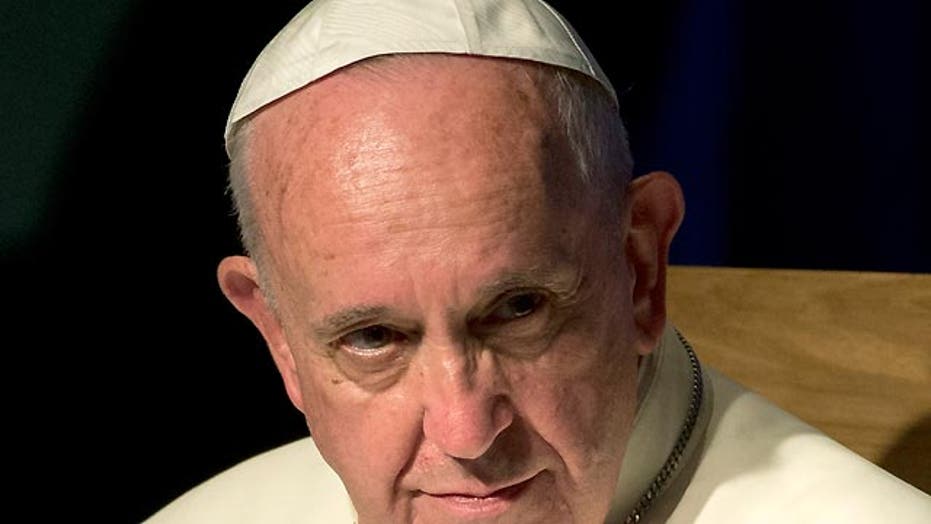 Should Pope Francis stay out of politics?

This is a rush transcript from "Special Report," June 18, 2015. This copy may not be in its final form and may be updated.

ARCHBISHOP JOSEPH KURTZ, U.S. CONFERENCE OF CATHOLIC BISHOPS: For the good of our earth and one another, we need to move beyond self-interest. And so often, let's face it, we live in an environment which is often driven by self-interest and sometimes extremely narrow self-interest.

CHRIS WALLACE, ANCHOR: Archbishop Joseph Kurtz, president of the U.S. Conference of Catholic Bishops, explaining Pope Francis' encyclical on global warming today. And we're back now with the panel. Well, this is a sweeping statement, 180 pages, in which the Pope says that he we are turning earth into what he calls, quote, "an immense pile of filth." And he links it to the rich exploiting the poor. Chuck, on a topic where battle lines have already been so drawn, as powerful as the Pope's words are, will it change anything?

CHARLES LANE, WASHINGTON POST: Well, I think it's going to give a little bit of ammunition to the folks who think climate change is a big problem because he's a major world leader and he has weighed in on their side. The strength of his logic, I think, is not terrific because he is attributing all of this carbon emission to the growth and consumption among rich countries, at least according to the excerpts I have read, when in fact the big factor really is the boom in production in poor countries called China and India. And they are the major contributors, you know, the United States is carbon emissions have leveled off, largely, by the way due to a free market phenomenon called fracking, which produced a lot of natural gas that enabled us to eliminate coal consumption. So I have great respect for the Pope as leader of his church. I just thought there was confusion in some of his economic analysis here.

WALLACE: A number of Catholic Republicans running for president, including Jeb Bush, including Rick Santorum, have suggested that perhaps the Pope should stay or more explicitly religious, moral issues, and should stay out of issues like this. George, what do you think of that argument?

GEORGE WILL, SYNDICATED COLUMNIST: The Pope is entitled to have his opinions about a scientific problem such as this, but they're entitled to no particular deference. He turns this into a moral problem. He comes out of a Latin American strand of Catholicism that is, frankly, sort of anti-capitalist and anti- bourgeois, and confused about how to help the poor.

He says we have to burn less coal. You're going to raise the price of electricity. It doesn't mean a thing to the four of us. It means a lot to poor people if the price of electricity goes up. And then he says the planet is in the grip of consumerism. There are about 2 billion people at least on this planet who wish to be in the grip of consumerism but they are too poor.

WALLACE: While liberals are cheering the Pope's statements about global warming, there are some other statements that they may have some trouble with. And let's put those up on the screen. In this encyclical the pope also says this, "Since everything is interrelated, concern for the protection of nature is also incompatible with the justification of abortion." Charles, that's kind of an interesting linkage by the Pope.

CHARLES KRAUTHAMMER, SYNDICATED COLUMNIST: Look, and the left has been quite selective in embracing the Pope's statements depending on what it likes and what it doesn't like. Look, I have the greatest respect for the Catholic Church, probably the oldest institution in the west, on all the good it's done. But I think that an institution that is not exactly distinguished itself over the centuries when it came to science -- Galileo comes to mind -- should be somewhat humble continuing to teach signs as well as this case economics and politics.

And there is also a flaw in the logic. The logic of the Pope is, because he cares for the poor, he wants us to do everything that we can to stop climate change. But, the fact is, as Bjorn Lomborg, who is a Scandinavian environmentalist, the author of "The Skeptical Environmentalist," who accepts all of the premises the Pope does about human causation for global warming, has done unbelievably voluminous studies about what things you can do to help the poor around the world and what would be the effect on them by certain measures, and ranking last is an attack on global warming.

For example, the European Union is going to spend a quarter of a trillion dollars in reducing its emissions by 20 percent by the end of the decade. And that, you know what effect it's going to have on the climate? It will reduce world climate by 0.1 degree Fahrenheit in 85 years. Imagine what you could do with the money if you devoted it to malaria nets, to vaccinations, and things that are doable for the poor. So the argument defeats itself.

WALLACE: George, we have got less than a minute left. This does set out a very interesting trip by the Pope to the United States in September. He is going to address a joint session of Congress. He's going to talk about everything one assumes from climate change to abortion to religious freedom to the poor. And you can almost see one side of the aisle cheering one statement and the other side of the aisle cheering the other.

WILL: When he comes to the United States he should notice something about American religion. As he leads the Catholic Church into greater and greater political activism and congruence with political fashion, he should notice that the mainline protestant churches have done that well in advance of him. And the result has been more and more empty pews.

WALLACE: That's it for the panel. But stay tuned to see Hillary Clinton get down with The Beatles.