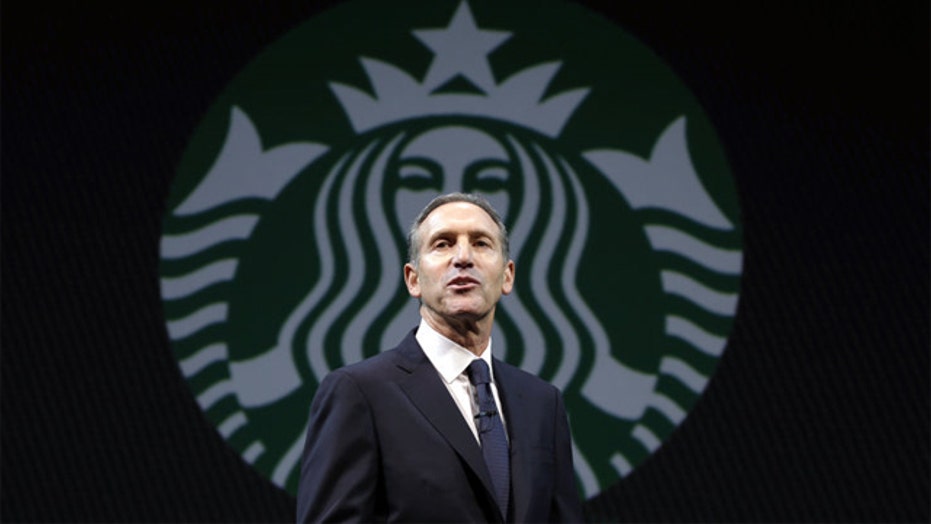 Starbucks CEO asks customers not to bring guns into stores

MICHELLE FIELDS: I think the CEO's politics are just as bad as the overpriced coffee he sells, but look Americans have every right to be upset. Why is the coffee shop getting involved in politics? This is simply PR. It's not as if there was some big event that happened at Starbucks related to a gun. This is the CEO taking advantage of the DC Navy Yard shooting inserting himself in the conversation and trying to generate a conversation about gun control. That's what it's all about: PR and politics.

WAYNE ROGERS: I think they have every right to say what they say. If I owned a store I would be the same way as Howard Schultz. I would just say "guys we don't want people coming in here with guns." I don't want them to come in with flame throwers. I don't want people to come in with sticks of dynamite. All of that upsets my customers. I have a right to say that, why shouldn't I say that? Why he's doing it, I don't know.

EBONI K. WILLIAMS: I think there's precedent for this type of CEO political statement. We saw this with Chik-Fil-A last year, coming out with this really hard, bright-line stance against marriage equality. Is it bad for business? I don't think necessarily. Chik-Fil-A really didn't see any type of significant downfall in their business. In fact, they had about a 2.2 percent sales increase after that type of political statement. And Starbucks itself has gone down this road, taking a bright-line stance in favor of marriage equality. Three weeks after that stance, their stocker percentages went up 15 percent. So I don't think it's bad for business.

JONATHAN HOENIG: No one on this panel should lecture Howard Schultz on how to run business. He's done pretty well without any of our help. This is a property rights issue, Eric. It is not a Second Amendment issue, and I'm saying that as a card-carrying member of the National Rifle Association. Starbucks is a business. It's private property. They're going to make the decisions that are best for their brand and best for their bottom line. And to Schultz's credit he is asking customers not to bring guns into the store. I think Second Amendment advocates should respect his rights; should respect his property wishes and not make his stores the battleground for some kind of political movement.

JONATHAN HOENIG: Our defense policies are dominated by egalitarianism in this notion that everyone's the same, no one is more or less of a risk than anyone else, we have to treat everyone equally. Bologna. We should be profiling. Specifically those who we know present a bigger risk than others. So instead of patting down granny at the TSA we should pat down those associated with Islamist groups. Instead of restricting everyone's gun rights we should restrict the rights who have actually demonstrated mental illness. Or instead of snooping on everyone we should actually maybe address Jihadism and the actual enemies to this country. But indtead we treat everyone the same and that's why we miss so many of these clear and present danger threats.

WAYNE ROGERS: I think, Eric, the government is too big, You know that. We've got 8 zillion agencies all falling all over themselves trying to do some kind of a job that they cannot do, they're ill-equipped to do. They snoop on each other, we know that. Here's the IRS snooping on us innocent citizens, and the people who are running the IRS don't know any better. Look at the amount of fraud, for example, that's in the disability payments: over $1.4 billion. I mean these are people who are inept, who are dumb, who are stupid-and we've got them all in the government. They just all ought to clear them out, start all over.

EBONI K. WILLIAMS: I think anytime we're talking about encroaching on the citizens' privacy rights you've got to be careful. And I, above all else, am really big into protecting those rights. But back to Jonathan's point, its unreasonable searches and seizures. When you've got people on record as having documented mental illness, documented arrest records, documented criminal records that unreasonable notion goes out the window. At this point you're talking about a reasonable risk of harm that these people are posing, and that can trump these privacy rights of individuals.

MICHELLE FIELDS: They're absolutely failing, I mean look at them. They are spying on innocent Americans while their colleagues, the guys who are sitting in the cubicle right next to them, are being implicated mass shootings, and being implicated for espionage, and being implicated for releasing national secrets. I mean this is what is going on in the government. I think the problem is that we have a government that is too big and has spread itself too thin. There are five million people with top secret security clearance right now. That is too many people. There is no way you can vet all of these people. There are going to be people falling throught the cracks.

MICHELLE FIELDS: A lot of these young people voted for Obama because they thought he was going to come in and fix the student loan crisis, but he hasn't done anything about that. All he's done is freeze the interest rates, and interest rates aren't the problem; it's the rising cost of tuition. If Obama wants to fix that, he needs to rethink government subsidies, because government subsidies are what are driving up the cost of tuition, and they're diminishing the return on investments for graduates because it's creating an artificial demand for college. So not only are kids not having a job-they have a ton of student loan debt and they don't know what to do. I mean there's nothing to do.

EBONI K. WILLIAMS: It is inexcusable and I am not going to make excuses for the President. But I will give him credit when we talk about the student loan forgiveness legislation and the ObamaCare provision that allows young people under the age of 26 to stay on their parent's policies, those things do give some fiscal breathing room. However, what our generation is getting wrong is that we go to school and we do not know what to do when we get out because we are not learning skill sets that transfer into dollars and cents.

JONATHAN HOEING: The people who are hurting are the young people specifically. This is the net result of Obama's egalitarianism, his collectivism, and his calls for self-sacrifice; it has hurt the youth more than anyone else.

WAYNE ROGERS: I don't think it's just the young people and they are not being discriminated against. Everybody is being discriminated against; you got 47 percent of the people in the United States who don't pay any taxes whatsoever. It's a Keynesian economic theory; they are sacrificing ideology to undermine everything. After four and half years that this man has been in office you still have unemployment in excess.

JONATHAN HOENIG: (NM) UP AROUND 30 percent SINCE I PICKED IT ON AUG 10TH, STILL HEADING HIGHER