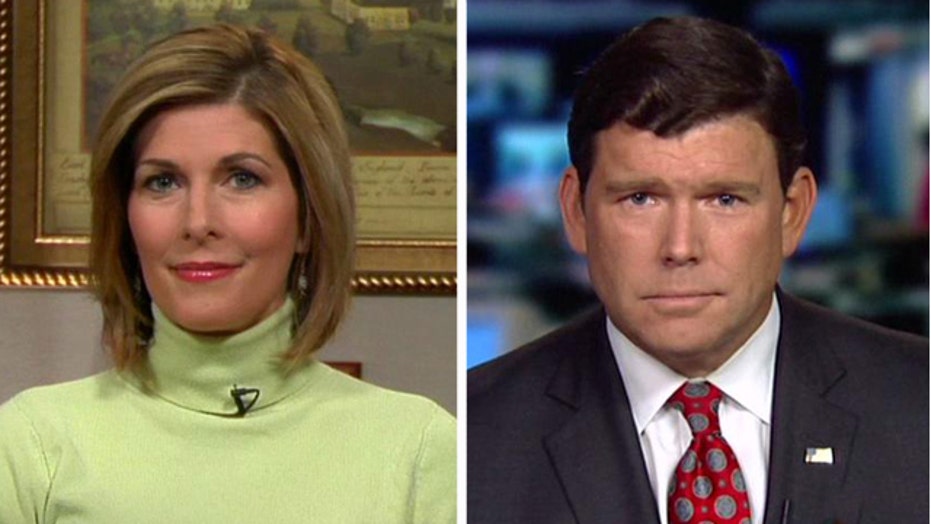 E-mail links the White House to the altered talking points

This is a rush transcript from "Hannity," April 30, 2014. This copy may not be in its final form and may be updated.

SEAN HANNITY, HOST: And this is a Fox News Alert. The smoking gun is out when it comes to the Obama administration's massive cover-up of the Benghazi terror attack that killed four innocent Americans on September the 11th, 2012. Now, the conservative watchdog group Judicial Watch obtained an e-mail written by deputy national security adviser Ben Rhodes. Now, in it, he provides talking points to Susan Rice in advance of her infamous Sunday show appearances.

Now, the document reads, quote, "to underscore that these protests are rooted in an Internet video and not a broader failure of policy." And finally, there you have it -- cold, hard, evidence proving that a high-level White House aide instructed Ambassador Rice to blame Benghazi on a YouTube video, right?

Well, not so fast, because today, somehow, Jay Carney -- well, he stepped in front of reporters and actually with a straight face said this.

JAY CARNEY, WHITE HOUSE PRESS SECRETARY: That document that we're talking about today was about the overall environment in the Muslim world. I can say it again and again, and I know you can keep asking again and again, this document was not about Benghazi.

HANNITY: Now, sadly, that's how the administration attempted to dismiss the smoking gun e-mail written by deputy national security adviser Ben Rhodes, that it wasn't about Benghazi, even though it was clearly referenced by Susan Rice on the Sunday shows, which is why Carney's pathetic explanation did not sit well with some of the reporters in the briefing room today, including ABC's Jonathan Karl. Let's take a look.

JONATHAN KARL, ABC NEWS: Why were you holding back this information? Why was this e-mail not turned over to the Congress? Why was it not released when you released all the other e-mails? This is directly relevant. Why did you hold it back.

KARL: Why did it take a court case for you to release this e-mail?

KARL: It was her prep for the Sunday shows!

CARNEY: It wasn't her only prep, Jon. She relied on -- for her answers on Benghazi on the document prepared by the CIA.

HANNITY: Ah, but Jonathan, remember, we're supposed to believe Jay Carney, who conveniently informed us today that the Rhodes e-mail was not about Benghazi. Instead, it was merely designed to enlighten Ambassador Rice about other hot spots in the Muslim world. There's just one problem. When Rice blamed a YouTube video during these appearances, she wasn't asked about Iran! She wasn't asked about Egypt! When she pointed the finger at that movie trailer for causing the deaths of four American Americans, she was asked about one place and one place only, Benghazi.

UNIDENTIFIED MALE, "THIS WEEK"/ABC, SEPT. 16, 2012: First of all, what is the latest you can tell us on who these attackers were at the embassy or at the consulate in Benghazi?

CHRIS WALLACE, "FOX NEWS SUNDAY"/SEPT. 16, 2012: Let's talk about the attack on the U.S. consulate in Benghazi this week that killed four Americans, including Ambassador Chris Stevens.

DAVID GREGORY, "MEET THE PRESS"/NBC, SEPT. 16, 2012: So you talk about this is as spontaneous. You can say definitively that the attacks on our consulate in Libya that killed Ambassador Stevens and others there, security personnel -- that was spontaneous? Was it a planned attack? Was there a terrorist element to it?

SUSAN RICE, U.S. AMBASSADOR TO THE U.N.: Our current assessment is that what happened in Benghazi was, in fact, initially a spontaneous reaction to what had just transpired hours before in Cairo, almost a copycat of the demonstrations against our facility in Cairo, which were prompted, of course, by the video.

HANNITY: All right, make no mistake about it, Susan Rice got her cues from this e-mail, and it wasn't written by the Central Intelligence Agency, it was written by a top White House aide. It was about Benghazi and it was designed to provide political cover for an embattled politician ahead of a presidential election.

And here with reaction to this developing story, investigative journalist Sharyl Attkisson, and the host right here of "Special Report," Bret Baier. Guys, welcome to the program. Glad you're with us.

HANNITY: Bret, let me -- let me start with you. And both of you come at this -- you are objective reporters. I come at this a little differently. I have a political point of view. So I just want to make sure our audience gets the facts here.

First, Bret, your reaction to the news conference today. Do you think that's a plausible explanation, considering the date of this is September 14th, three days after the attack?

BAIER: If you were to believe, Sean, what Jay Carney said today, you would say -- they're saying that Ben Rhodes was prepping Susan Rice for those Sunday shows and was typing up an e-mail memo that dealt with other places and not Benghazi, specifically not Benghazi. He doesn't reference that in the e-mail, by the way, but she's going on the Sunday shows just days after this attack.

Now, the key to this whole thing is that the deputy director of the CIA at the time, Mike Morell, in just recent weeks testified on Capitol Hill. "What did you think of Susan Rice's appearance on the five Sunday talk shows?" And he said that when she mentioned protests, that was in their talking points. He apologized because he said he relied on analysts back here and not people on the ground.

Now, it strains credulity as we watched a lot of reporters today ask these questions to Jay Carney -- ABC, CBS, The New York Times pressing him on this -- for many, many months, Jay Carney has said that they didn't have any guidance.

ATTKISSON: Well, the two questions -- I don't know that it's a smoking gun. I'll let that be for others to decide. But I do think that it's very clear when you look at the narrative by multiple Obama administration officials that they were all reading from the same page. So whether or not Carney is correct that that particular e-mail dealt with Benghazi or did not deal with Benghazi, it certainly was the message that was put out by Hillary Clinton when she spoke to the families upon the return of the bodies, when said, we're go after the guy who got -- who made that awful video.

HANNITY: All right, you mentioned the others that made the same argument. We have a montage of what they were saying and what they were telling us. Again, this was all -- we have to see through the prism. This was September, leading into an election in November. Let's show the montage.

HILLARY CLINTON, THEN-SECRETARY OF STATE, SEPT. 12, 2012: Some have sought to justify this vicious behavior, along with the protests that took place at our embassy in Cairo yesterday, as a response to an inflammatory material posted on the Internet.

VICTORIA NULAND, ASSISTANT SECRETARY OF STATE, SEPT. 18, 2012: We can all condemn this reprehensible video.

CARNEY, SEPT. 19, 2012: We find the video that has been so offensive to Muslims to be disgusting and reprehensible.

PRESIDENT BARACK OBAMA, SEPT. 20, 2012: Although we had nothing to do with the video, we find it offensive. It's not representative of America's views.

OBAMA, SEPT. 25, 2012: -- as a crude and disgusting video sparked outrage through the Muslim world. Now, I have made it clear that the United States government had nothing to do with this video.

HANNITY: Now, Bret, let me go back to you. That was September 25th when the president was at the United Nations, and he echoed those sentiments. When we look at the original talking points, which we now have access to -- and we also know that there was a previously scheduled meeting with Leon Panetta and the chairman of the Joint Chiefs -- they -- they saw the president on September 11, while the attack was going on.

Do you think that things changed and can be provably on paper, do you believe that this can be shown to have changed?

BAIER: Well, I think that this is going to produce more questions up on Capitol Hill, and there's already a lot of reaction about this because this e-mail was held back and finally released by a -- by a judge.

It's important to point out, to be fair, there were protests other places that they did believe were tied to this video, or at least they said that. But on the Benghazi situation, everyone through the chain, on the ground said this was not a protest. There was no protest. It was a terrorist attack. Military was sending it up their chain. The intelligence community was sending it up their chain. And we've heard testimony specifically about this.

So three, four, five days later, they know specifically that there was no protest and this was an organized terrorist attack, and yet, you know, many times after that, when referencing Benghazi, the video comes up in -- in discussion.

HANNITY: And Sharyl, there was also the conscious decision that was made not to take the word of eyewitnesses on the ground and the station chief and others, but rather go with an interpretation from Langley?

ATTKISSON: Well, I would argue that you're left with two scenarios. One is the one in which that they just innocently took the wrong information and put out misinformation, and the other is a political motivation. But let's accept their explanation that they were just wrong about it and innocently wrong. That's one of the most -- that's got to stand out as one of the most terribly mistakes in intelligence that I can imagine that's been made at least in recent memory that I've heard of.

In other words, they took all the evidence, and then someone who collected it and analyzed it drew the wrong conclusion based on a very tiny slice, they say, of something that somebody said, ignoring the real evidence from those on the ground and the witness testimony and the intelligence reports and the prior warnings -- that in and of itself, I think, should be alarming and disturbing.

HANNITY: Yes. I don't have time to play a montage here. Sharyl, let me ask you one question about your situation, comments you made when you left CBS. There was this reluctance, this resistance to go deep into some of the more controversial issues coming before the Obama administration, and you've come under heavy fire for that. Do you stand by your original comments?

ATTKISSON: Well, sure, I mean, I'm under fire from the people who are defending themselves, who are surrogates for those accused or representing those who believe that they've been accused in the reporting. So that's expected, and I accept that and expect it, and I don't pay much attention to it.

HANNITY: All right, good to see you. Thank you for being with us.

Bret, I never miss "Special Report." Thanks so for being with us. Appreciate your input. Thank you.