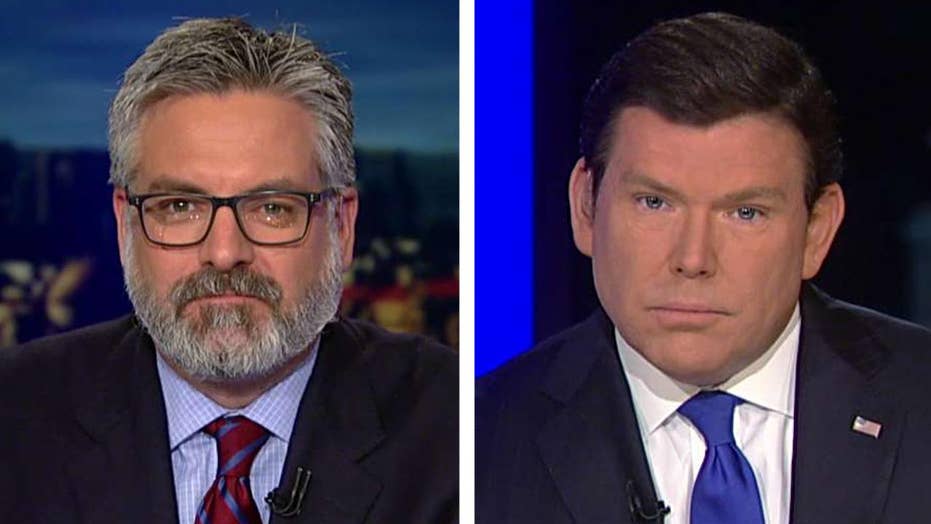 This is a rush transcript from "Special Report with Bret Baier," December 8, 2017. This copy may not be in its final form and may be updated.

REP. CATHY MCMORRIS RODGERS, R-WA.: Roy Moore for the sake of this country, for the love of this country should step aside and allow another Republican to hold that seat.

SEN. JOHN THUNE, R-S.D.: If he comes to Washington he will immediately be under an ethics cloud, probably an ethics investigation.

SEN. AMY KLOBUCHAR, D-MINN.: You have a president that's down there telling people to vote for someone where there is, to me, evident, irrefutable evidence, written evidence that he was preying on underage girls.

LLAMAS: And you made some notes underneath?

PHILLIP JAUREGUI, ROY MOORE ATTORNEY: Is the ink a month old or is it 40 years old?

BRET BAIER, ANCHOR: Well, that Senate race in Alabama is the focus of a lot of attention as we get ready for the election on Tuesday. Tonight the president is down, very close by in Pensacola. Tweeted today, "Big crowd expected in Pensacola, Florida, form making America great again speech. We've done so much in so short a period of time and yet are planning to do so much more. See you there. Last thing the make America great again agenda needs is a liberal Democrat in the Senate where we have so little margin for victory already. The Pelosi-Schumer puppet Jones will vote against us 100 percent of the time. He's bad on crime, life, border, vets, guns, and military. Vote Roy Moore."

Now whether the speech is going to focus on that, the White House says no. Maybe a mention or two. Let's see what the panel thinks: Steve Hayes, editor in chief of The Weekly Standard; A.B. Stoddard, associate editor at Real Clear Politics and host of "No Labels" Radio on Sirius XM, and Mercedes Schlapp, contributor with The Hill.

Matt, there is no denying that just the geography of this event tonight and the campaign style feel to it is going to spill over to Alabama.

MATT SCHLAPP, THE Hill: Absolutely. And the president is writing a tweet which is if you are a partisan Republican or you're a conservative, you can't see anything good about the Democratic candidate winning and his policy position are abhorrent. So voters in Alabama have a tough decision to make.

BAIER: The RCP, Real Clear Politics average, A.B., of the race has changed and Roy Moore, according to the average of recent polls, is up 2.3 right now. So it's going to be tight.

A.B. STODDARD, REAL CLEAR POLITICS: Right. A couple of things. Think of the people who are not telling pollsters they are going to support Roy Moore. Think of the state of Alabama. I think the Doug Jones voters are not living in Alabama. There are not enough of them.

And he has a very energized get-out-the-vote operation. There have made it very clear, there's been an update on this woman adding something to the end of what Roy Moore reportedly wrote in her year book. Gives everyone a reason to doubt her and makes them feel better about going to the polls on Tuesday. I think he is going to win for sure.

BAIER: You know, Gloria Allred came out and said they had a handwriting expert look at the actual signature and they assessed that it was Roy Moore but that her client did add notes afterward in that year book, and that has exploded this whole thing.

STEVE HAYES, THE WEEKLY STANDARD: You can imagine why it's big news. Gloria Allred said the opposite when she introduced the yearbook just a couple weeks ago. Gloria Allred is not a credible person. What's important to note is that Beverly Nelson did not admit to forging Roy Moore's signature. That's not what's in question here. She admitting to adding notes which Gloria Allred later said were notes that Roy Moore added, were descriptions of the day and such that Roy Moore added.

There are numerous other women who have made I think credible accusations. And Roy Moore has had trouble making a defense. He has been totally inconsistent with what he has said. He originally said that he knew in particular Gloria Deason and Debbie Weeson Gibson these two women and said if we did go on dates, then we did. But I don't remember that. But lately he is been moving towards a categorical denial in which he says I do not know any of these women and I did not date any of those women. Those two are totally different things.

BAIER: Yes, we'll see how much this factors into this rally tonight. It is going to be classic Trump style. He does have a lot to talk about bodies this Alabama race, and that is the economy. The November jobs report, employers added 228,000 jobs in November while the unemployment rate remains at 17 year low of 4.1 percent. Then the changes since he took office, we put this up time to time, but it keeps on changing even more, GDP growth, unemployment rate, consumer confidence, average hourly pay, these are all positives.

SCHLAPP: To me the unemployment rate was low at the end of the Obama administration. To me the real story in the economy is without any major pieces of legislation beyond pulling back on regulations this economy is taking off. We had five hurricanes that impacted, that lowered the GDP growth. You could have GDP growth at four percent or higher. There is no question there is a pent-up demand in the business community in markets for this economy to take off. And that's why you are seeing in the stock market and you're see it in growth, and if this tax bill really happens I think there is a real promising future for the middle-class because they're going to have economic prospects for no other reasons that Americans are taking their money and putting it back on the table.

A.B. STODDARD, ASSOCIATE EDITOR, REAL CLEAR POLITICS: Well, I think the news from today is a great thing and the president should stay focused on that at the rally tonight and not ramble off on other controversial topics like he is known to do. But I think the tax reform package will pass. And I think he should talk about that tonight. That's a victory. I absolutely believe Republicans are going to pass something by Christmas. They just are determined to.

I think the real concern among Republicans privately is whether or not the reforms are going to jolt some kind of change in hiring and wages whether people are going to feel it by next August before the midterm elections. They've promised a middle-class miracle and they have to deliver one.

HAYES: Yes, I think Matt is absolutely right. If you think about what you're thinking, how you look at your business if you run a small, medium, even a large business, under Barack Obama for eight years we had an administration, somebody in the White House, the executive agencies, bureaucrats in Washington who were hostile to business, period. They were hostile to business. When Donald Trump came in, that was not the case. He has signaled repeatedly that he's serious about deregulation. He's implemented rules to change deregulations, cut back on the number of regulations. I think that sends a message. I also thing that people are hopeful that there will be some additional tax relief, and that is I think built into these numbers that we're seeing.

BAIER: One last thing on the other news today. Trent Franks saying that he was resigning effective today. It came out of the blue after he said he was going to resign eventually. He had a statement saying "Last night my wife was admitted to the hospital due to an ongoing ailment. After discussing options with my family we came to the conclusion that the best thing for my family now would be for me to tender my previous resignation effective today, December 8th."

Minutes later the Associated Press had a headline that said "Ex-aide Franks offered $5 million to carry his child." Then "Politico" had a story about female aides fretted Franks wanted to have sex to impregnate them. We have now seen Al Franken, John Conyers. We are dealing with a Senate race down in Alabama with allegations, and this is the latest to -- it doesn't seem like it is going to come to an end here any time soon.

STODDARD: No. The reports out yesterday that a major newspaper and another cable news channel are working on between 20 and 30 cases.

STODDARD: Yes, of members in both parties, so the total is between 20 and 30.

STODDARD: There is still a cleaning operation going on. The Trent Franks thing is really sad in so many ways because he obviously never groped anyone or forced himself on anyone, but the fact that he didn't know this was wrong and basically reckless and could imperil his career is really bizarre. I hope his wife recovers and everything works out, but that is -- you cannot make this up. It's the strangest thing I have ever heard.

BAIER: And what about the swift move on not just this, but the Franken move, the Conyers move. Is this setting up the Democratic Party to try to say, well, Republicans didn't act like we acted?

SCHLAPP: Yes, I don't know if either party is going to get away with that. The fact is that this was wrongdoing with both parties, people acting inappropriately. And somehow people thought it would be OK to hush it up with some payments, which I'm OK with that if there is a victim involved that wants confidentiality. But beyond that, with American taxpayers' money, they need to know these tawdry details, need to know what members. And look, the member are either going to have to resign or they're going to stand before the voters, and I have a feeling the voters have had enough.

BAIER: The call for the names and the amounts is still out there.

HAYES: We will learn more details, maybe as many as a couple dozen of members of Congress who have sexually harassed people on their staff. We will also learn much more about taxpayer money being used for settlements, or being used to quietly make people go away. Those stories are being reported right now. I am confident that we will learn much, much more. And the view people have in the country of Washington, it's hard to imagine that it gets any lower, will get lower.

BAIER: That is hard to imagine.