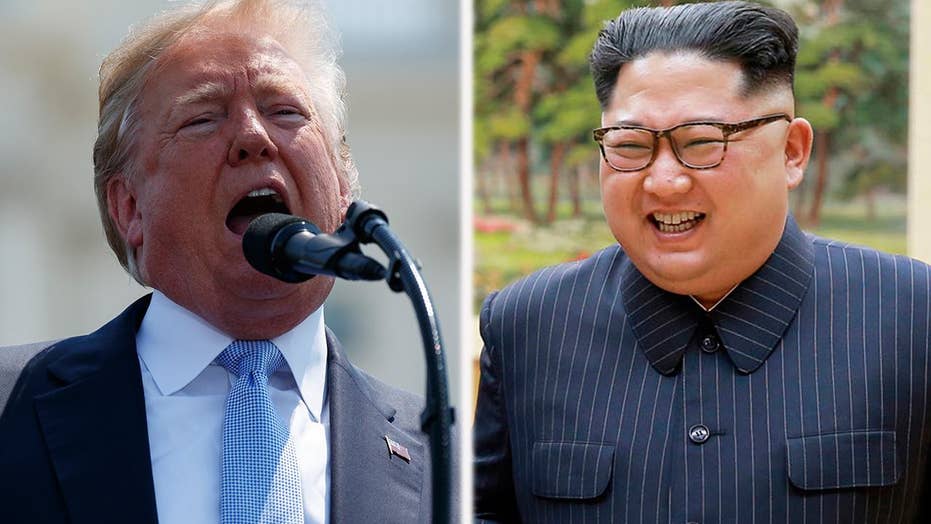 North Korea has history of backtracking on peace effort; reaction from the 'Special Report' All-Stars.

This is a rush transcript from "Special Report with Bret Baier," May 15, 2018. This copy may not be in its final form and may be updated.

HEATHER NAUERT, STATE DEPARTMENT SPOKESWOMAN: We have received no formal or even informal notification of anything.

Kim Jong Un had said previously that he understands the need and the utility of the United States and the Republic of Korea continuing in its joint exercises. They are exercises that are legal. They're planned well, well in advance.

GEN. JACK KEANE, FOX NEWS SENIOR STRATEGIC ANALYST: They are negotiating over leverage and things they want to have on the table. Now our diplomats are getting some insight as to where North Korea is really heading.

SEN. RAND PAUL, R-KY.: I think not doing military exercises would actually be a show of good faith on our part. It doesn't change anything permanently, but delaying that until after talks I think would be a good idea.

BRET BAIER, ANCHOR: Reaction to the announcement from North Korea today that have a problem with the U.S. and South Korea doing joint military exercises, so much of a problem that they may cancel the upcoming summit, June 12th, between President Trump and Kim Jong Un. The North Korean statement saying "This exercise targeting us, which is carried out across South Korea and targeting us is a flagrant challenge to the Panmunjom declaration and an international military provocation running counter to the positive political development on the Korean peninsula. The United States will also have to undertake careful deliberations about the fate of the planned North Korea-U.S. summit in light of this provocative military ruckus jointly conducted with the South Korean authorities.

So what about this ruckus and where this leads, and what is it? Let's bring in our panel: Fox News senior judicial analyst Judge Andrew Napolitano; Philip Bump, politics reporter for The Washington Post, and Steve Hilton, former adviser to British Prime Minister David Cameron and host of "The Next Revolution" here on Fox News Channel.

Steve, it seems like posturing. Is this thing falling apart, do we think?

STEVE HILTON, FOX NEWS: I don't think it's falling apart. I think it's perfectly possible this is part of the choreography. Remember just as what President Trump is doing is seen here as a big risk, it's also likely that back in North Korea what Kim is doing is seen as a risk and he may have people and factions there that he needs to placate to show that he's not caving in and so on. And there's this delicate dance that has to be done to get to that summit.

I think the response from President Trump is going to be crucial. He wants this really badly. I think he's going to do everything to herd the cats in the right way to get to that summit. It's going to be very important to see his response. I think that matters much more than anything we hear from our diplomats.

BAIER: You heard Rand Paul, Phil, say that maybe it's not so bad that we stop the joint military exercises. People at the Pentagon's heads would explode about that because they've been doing that for so long. They think it's crucial to the region to continue to do it.

PHILIP BUMP, THE WASHINGTON POST: It certainly is looking several years down the line, I think everyone would like to see a scenario in which such exercises are less necessary and that's sort of what we've been working toward. But I think the point that was just made is a critical point is, which is that President Trump has gone against his art of the deal mentality and put his cards on the table. And his cards are, I very much want this thing to happen. And I think North Korea recognizes to some that gives him leverage over President Trump and over the United States in this moment to try and twist some arms. And knowing that President Trump has not directly said I hope to win the Noble Peace Prize, but he certainly has hinted he assumes there will be some recognition for this. That gives the North Koreans some leverage.

And I think it's also interesting to note, the Middlebury Institute has pointed out that North Korea is also a little incensed at the way in which the United States has sort of assumed ownership over the developments on the North Korea peninsula, or on the Korean peninsula. This may be also to some extent a reaction to that.

BAIER: Listen to Martha McSally on this development, Judge.

REP. MARTHA MCSALLY, R-ARIZ.: It could be just some posturing and trying to show strength coming up to the summit. But we have also seen in the past, 1992, and 2000 and 2007, where they had a lot of nice words about moving toward more of a piece, and then it really ended up being nothing and it backtracked to their normal, oppressive, belligerent regime. But the hard work is in front of us.

BAIER: Basically looking at North Korea's past, they haven't been great about keeping up with their promises.

JUDGE ANDREW NAPOLITANO, FOX NEWS: No, not at all. Congresswoman McSally was here. She and I were talking about this when this news broke earlier today. I don't want to sound like an echo chamber. I agree with both of my colleagues here and I agree with her. But I wonder if our diplomats ought to have known that this was coming. Certainly Kim knew that these exercises were going to take place. Rand Paul is my dear friend, but you are right, the military's heads would explode. It's too to stop this thing now. The cost of stopping it in human energy and in treasure would be far too much, and the implication of stopping it is so contrary to everything Donald Trump stands for.

BAIER: Which is essentially strength.

NAPOLITANO: Correct. Correct. So either we didn't know this was coming and we poorly prepared or this is the way we are. And as Steve says, he has to appeal to his base. It's not a nationwide base, it's a very small base of the leadership of the Communist Party that assure that he stays in power.

BAIER: In the background of this you had this decision on ZTE, this Chinese company and kind of a walk back of what were going to be sanctions against this. I saw on Twitter today someone speculating that maybe Kim looked at that and said, I want a piece of that. Maybe I should ask for something too if they're walking back other things.

HILTON: That's one way of looking at it. I think the sophistication of the different players here is something that we can't be certain about. I think the Chinese definitely feel, as you are saying, because the president wants this so badly, they have some leverage There.

BAIER: In that case, the Chinese deal with trade.

HILTON: That's right. But I think if that is one deal, it's a very important one. And I was concerned about the walking back. But actually, if you look at the increased scrutiny given to deals right across the spectrum, not just this big one but all throughout the range of technology deals with the Chinese, I think overall the stance towards China is way tougher than it was before, and I think that needs to continue. But to get this delicate process on and keeping it on the road, you may need to give the odd concession here and now.

NAPOLITANO: Does the president know what Kim is going to say before they actually meet in Singapore?

BAIER: That's why Pompeo was out there. This is a lot of spinning plates for the new secretary of state, Mike Pompeo. We will see what happens. Time will tell whether the Singapore summit stays on schedule. If it does, June 12th is a momentous day in history, actually. June 12th, 1987, was the day that President Ronald Reagan deliver that now iconic phrase, "Mr. Gorbachev, tear down this wall." Five months after that, Mikhail Gorbachev traveled to D.C. for a summit in Washington, and two years later that wall would come down.

I have a new book out today, "Three Days in Moscow, Ronald Reagan and the Fall of the Soviet Empire." It details the three days around the last summit between Reagan and Gorbachev in Moscow and Reagan's speech to Moscow State University students. The Moscow summit was the final of four summits, Geneva, Reykjavik, Washington, and Moscow, and that led to a major treaty between the U.S. and the Soviet Union on intermediate nuclear weapons, eventually leading to the end of the cold war.

I recently spoke with Reagan secretary of state George Shultz about those summits and how Reagan and Gorbachev really hit it off from the start, talking for hours.

BAIER: Did you want to interrupt?

SHULTZ There is always some guy in the White House whose job it is to go and stand obnoxiously in order to give the message time is up. So he comes around to me and he says, sir, don't you dare go in. The longer they spent together, the better it is.

BAIER: That's true. The book is absolutely today, out today everywhere. We will see if the Singapore summit is back on track, and if so how those talks between President Trump and Kim Jong Un may go.