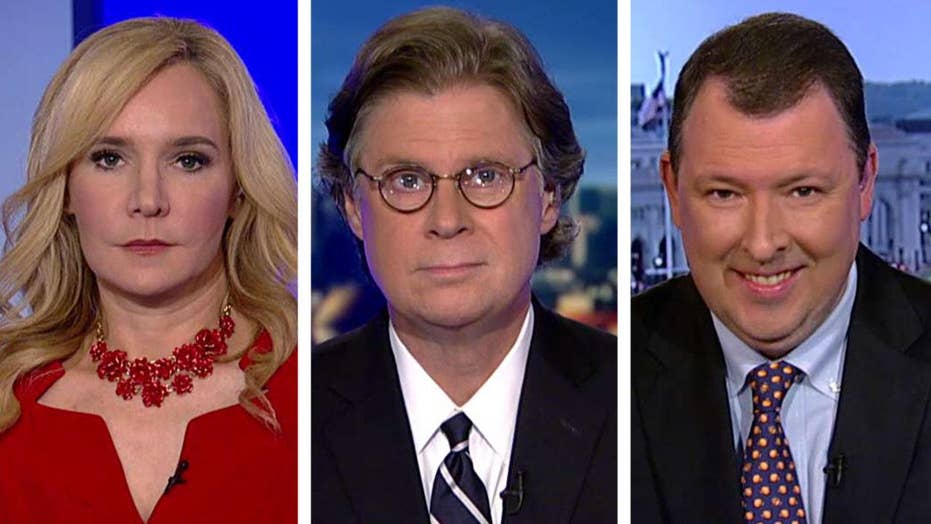 Resistance from within? Anonymous senior administration official claims to working against President Trump in scathing op-ed; reaction and analysis from the 'Special Report' All-Stars.

This is a rush transcript from "Special Report with Bret Baier," September 5, 2018. This copy may not be in its final form and may be updated.

PRESIDENT DONALD TRUMP: We have somebody in what I call the failing New York Times that is talking about -- he's part of the resistance within the Trump administration. This is what we have to deal with, and the dishonest media, but it's really a disgrace.

So when you tell me about some anonymous source within the administration, probably who is failing and probably here for all the wrong reasons, now -- and The New York Times is failing. If the failing New York Times has an anonymous editorial -- can you believe it, anonymous? Meaning gutless, a gutless editorial. We are doing a great job.

BRET BAIER, ANCHOR: Well, the president reacting to The New York Times op-ed from an anonymous, what they call a senior administration, Trump administration official, where it is titled "I Am Part of the Resistance Inside the Trump Administration. I work for the president. With likeminded colleagues I vow to thwart parts of his agenda and his worst inclinations," saying that he's impetuous, adversarial, petty, and ineffective.

Sarah Sanders saying this is pathetic and reckless, selfish, and, quote, this coward should do the right thing and resign. Just in the past few minutes, Senator Bob Corker from Tennessee, who is not running for reelection, said this. This is what all of us had understood to be the situation from day one. I understand this is the case. That's why I think all of us encourage the good people around the president to stay. I thank General Mattis whenever I see him.

Let's bring in our panel: Byron York, chief political correspondent of the Washington Examiner; A.B. Stoddard, associate editor at Real Clear Politics, and Washington Post columnist Marc Thiessen. OK, Marc, obviously this is anonymous. This comes, however, after the Woodward book, and the president is reacting, not just once, twice, he just tweeted out "treason?"

MARC THIESSEN, WALL STREET JOURNAL: Treason might be a little bit strong, but he's right to be mad. The deep state just confessed. The deep state, it turns out, is not the permanent bureaucracy, it's not Obama holdovers. It's apparently people who Donald Trump appointed to senior positions inside the government. We don't know who this person is, but many of the stories, the activity he describes, tracks with what's in Bob Woodward's book, and with named people, too. In Bob Woodward's book, Gary Cohn apparently admits to having taken decision memos off the president's desk and bragged that he didn't even notice they were missing. There is a story in there about how after Assad gassed his own people, Trump called up Mattis and said he wanted a plan to eliminate Assad, which is a legitimate military target, and Mattis reportedly put down the phone and said we're not doing that.

BAIER: The president pushed back on that particular reference about Syria and Assad today, saying that that is just not true. Here he was in the Oval Office with the Emir of Kuwait.

TRUMP: We are very happy with him. We are having a lot of victories. We are having victories that people don't even know about. And he's highly respected all over the world. And I did appreciate his statement. He didn't have to write that statement, but I did appreciate it. And I appreciated the statement of John Kelly, and I appreciated the statement of many others. Every week, I seem to have a book coming out. Some good, some bad. In all fairness, I get some good ones, too. But I like to take them on when they come out. That's a piece of fiction.

BAIER: That was not it, but here is the president on the Woodward book.

TRUMP: Just gave me, I think, because the book is a total piece of fiction. And he was totally not even misquoted. He never made the statement. He came up with the statement that honestly -- I've heard over the years that General Mattis is an intellect. And when I read his statement, I asked him whether or not this was true. He said not only is it not true, I would like to write a statement. I said, thank you very much. That's very nice.

A.B. STODDARD, REAL CLEAR POLITICS: Well, it was so interesting, the Senate majority leader's reaction to you which was that he refused to respond in any way, pretended he knew nothing about it until you set it up in the intro. And he twice said he wanted to talk about the accomplishments of the Congress, not even the Republican government. He later heralded the accomplishment of a unified Republican government, only 20 years of the last 100, don't want to squander this opportunity, but twice he was talking about the accomplishments of the Congress.

After comments like Senator Corker's, yes, he's retiring, but he has said these things for a long time. It's a daycare, summer needs to be in charge of the toddler, whatever he said a year ago. Everything in Bob Woodward's book rings true of things that we've already heard in the past, same with this op-ed.

What is the response to this going forward? Do people resign from this administration? Does this person resign? Everyone on the Internet is calling them a coward. Is the best thing to do to keep staying on the inside? The response from Republicans, it really is just another kind of drama, unless the response changes.

BRYON YORK, WASHINGTON EXAMINER: On the op-ed, this really is extraordinary, perhaps unprecedented. But I think what is striking about it as how small this is. The author concedes in the op-ed, pretty high up, that many of the administration's policies have already made America safer and more prosperous, mentions deregulation, tax reform, a more robust military.

And then the complaints are about the president is not a real philosophical conservative, he really doesn't believe in free minds, free markets, free people. He changes his mind at meetings. His instincts are not all that great. But this is a rather smallminded criticism of a person may they really don't like in meetings, but they concede that on the big things that we elect presidents for, this president has made a lot of progress.

BAIER: The president talks a lot about a witch hunt and the Mueller investigation, but there may be a witch hunt ongoing to find out who this person is and who was talking to Bob Woodward, do you think, inside this administration?

THIESSEN: There certainly should be a hunt to find out who this person is because there is a difference between being in the administration with the goal -- we keep hearing the phrase adults of the room. These are not adults who are subverting democracy. When you go to the administration and there are good people in there who say, Mr. President, you really shouldn't pull out of NAFTA. Mr. President, you really shouldn't put these tariffs down, that is one thing. You go in, and if the president makes a decision you really, really fundamentally oppose, then you resign.

But it's entirely another thing to go into the administration, pretending to serve the president, who was elected by the American people, and subvert his decisions. Nobody elected this guy. Nobody elected Gary Cohn, nobody elected any of these people, and so their job is to follow the lawful orders of the commander in chief or resign. They are not patriots.

BAIER: The New York Times calls it a "he." But who knows?