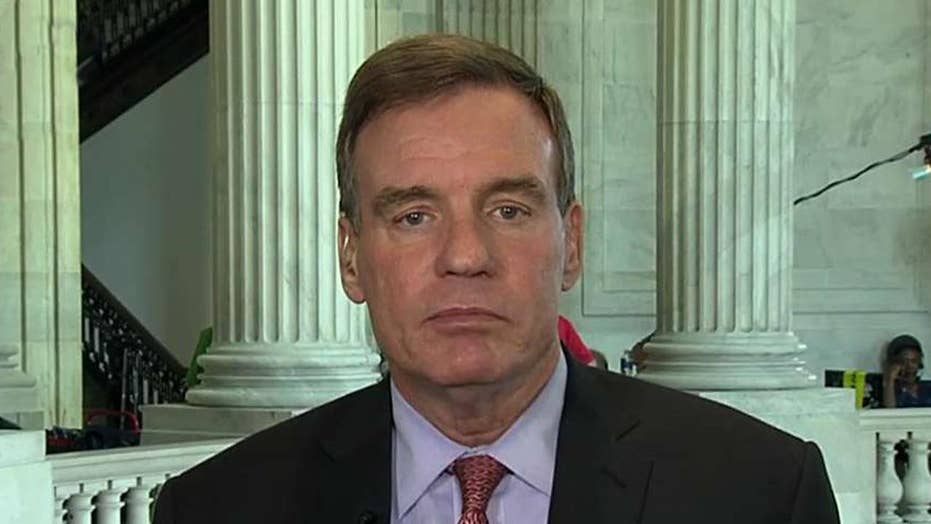 On 'Your World,' Intelligence Committee vice chairman wishes the Obama administration had put out more information on interference

This is a rush transcript from "Your World," July 19, 2017. This copy may not be in its final form and may be updated.

NEIL CAVUTO, HOST: Susan Rice, of course, a former national security adviser to President Barack Obama, is set to testify before the Senate Intelligence Committee, all part of that ongoing Russian probe, which brought us to this point, where are right now we in this whole thing?

Senator, thank you for coming.

SEN. MARK WARNER, D-VIRGINIA: Neil, thanks for having me on.

CAVUTO: Where does this stand right now?

As you have gone -- I know there are some things you can't reveal, and, believe me, I understand that. But is it a sense that you have, Senator, that this thing, the collusion part of it, is closer to being made or has not really been made?

WARNER: Well, Neil, we keep getting thrown these curveballs.

We obviously couldn't have predicted the firing of Jim Comey. We then had the attorney general. Now we have this meeting that Donald Trump Jr. said at first was about Russian adoptions. Now we're up to eight people in the meeting, one of which is somebody who has got at least has a colorful past in terms of potentially money laundering.

What we're starting to do now is talk to the people, though, who are affiliated with the Trump campaign that may or may not have had contact with the Russians.

So, we're really getting into the meat of it at this point. I wish we'd been further along, but we couldn't have predicted all the twists and turns that we have seen so far.

CAVUTO: You know, Senator, I often hear from both those who, you know, think the president is great and those who think he's not so great, but they think that your committee has it out for him, and that there is a predisposition not to look at any of the stuff that might look bad for the prior administration, fully aware that the Russians might have been involved more ways than thought last summer, and didn't pursue it, thinking Hillary Clinton is going to win in a walk, so they didn't bother.

Is there any truth to that? And if there is -- I'm making a leap here -- is it ignored by folks like you and other Democrats?

WARNER: Neil, first of all, we have the unanimous opinion of the intelligence community that the Russians massively intervened in our elections, in this case to help Mr. Trump and hurt Hillary Clinton.

CAVUTO: So, why didn't Barack Obama just explode that, let that known?

WARNER: But, Neil, I think -- and I have said this as well, that considering the fact that at least some folks inside the American government knew as far back as last summer, I have said, clearly with hindsight, I wish the Obama administration had gotten more of this information out earlier on.

I do think that most of the information and intelligence didn't fully come together until after the election. One of the things that we have unfortunately seen is, even in the aftermath of 9/11, we have way too many silos inside the Intelligence Committee, where I'm not sure everybody is trading information in an appropriate way.

CAVUTO: But don't these revelations, in the weird way, Senator, show you that the intelligence community still misses a lot of stuff?

So, when we talk about unanimity on the intelligence front, that's never necessarily a ringing endorsement of intelligence, right?

WARNER: Well, no, I actually think there's a legitimate criticism that sometimes the intelligence community, until they get all their facts together, don't come up with a complete conclusion.

I have rarely seen the intelligence community come up with a complete conclusion. Remember, what we're seeing in terms of the Russians, it just wasn't in the American elections. The Russians also intervened in the French elections. And in that case, Facebook was a little more on the job. Facebook took down 30,000 fake sites before the elections.

CAVUTO: But did anything you see, Senator...

My concern is, Russia is fighting 21st century cyber-war, and I'm not sure we're fighting in the same way.

CAVUTO: But, real quickly, Senator, have you seen anything that would tell you now that whatever they did, they influenced the election results?

WARNER: What I will tell you is, Russians spent a lot of time and effort putting out fake news, fake information, released information on one candidate, not on the other.

CAVUTO: I know that.

CAVUTO: But did they influence the results? Did they tip an election that would have gone to Hillary Clinton?

WARNER: We don't know in an election that is that close.

What we do know is, going forward, 21 states, the Russians tried to hack into.

WARNER: And, unfortunately, DHS has not shared that information with the state election officials.

WARNER: So, what really worries me is, how are we going to be prepared in 2018?