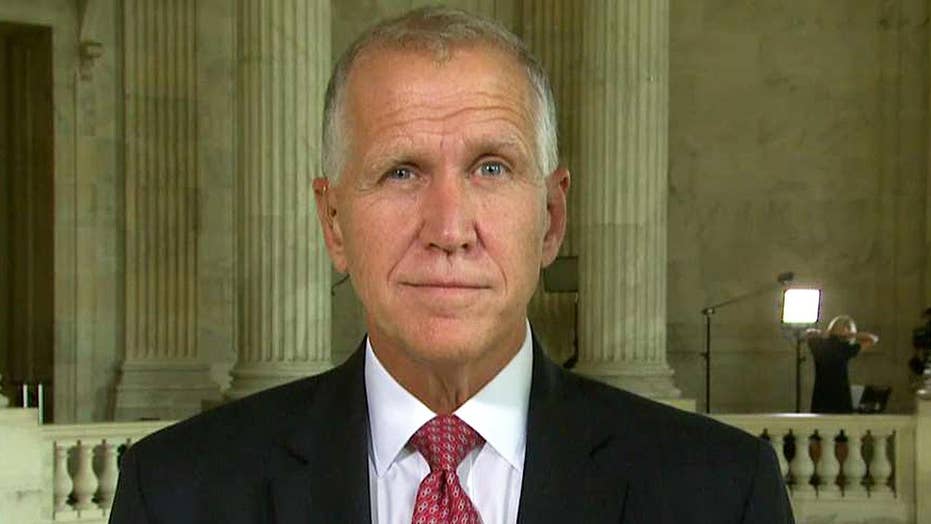 Sen. Tillis: GOP needs to find a solution for ObamaCare

This is a rush transcript from "Your World," September 26, 2017. This copy may not be in its final form and may be updated.

NEIL CAVUTO, "YOUR WORLD" HOST: To North Carolina Republican Senator Thom Tillis on all of this.

How likely is another shot at health care repeal and replace, Senator?

SEN. THOM TILLIS, R-NORTH CAROLINA: Well, I think we have to take a shot at it. It's a matter of when we do it.

And we have got to move on to tax reform. But, Neil, this is going to be a problem until Republicans come up with a solution. We were using the reconciliation instructions, because we have no support from Democrats to come together on something that we think will work and is sustainable.

But we have got to solve this problem. The problems of Obamacare are not going to go away until Congress acts.

CAVUTO: All right, now, meantime, I guess moving up to front is the tax cut thing. I guess we will detail it tomorrow.

Is it your sense that this will be a Republican-only event, that the likelihood of getting any Democratic votes is the same as it was on this?

TILLIS: Yes, I think so. I think this is going to require reconciliation. Again, we'd like to go through regular order and come up with something that goes beyond the 10-year horizon that you can do with reconciliation.

But there's simply no support from Chuck Schumer and some of the more liberal elements of the Democratic Conference to come to the table in a genuine way to reduce the tax burden and get our economy moving at the pace that we believe it can move.

CAVUTO: Now, a lot of your Democratic colleagues, Senator, say that they would be inclined to support a tax effort, especially on the corporate side, if the president left out a tax cut for the well-to-do, that that's a nonstarter to them.

TILLIS: Yes, I think so.

We did that in North Carolina, and it's worked extraordinarily well over the last five years.

CAVUTO: In the meantime, in the middle of this, we have a little bit of drama. And this is not a total surprise, but your colleague in Tennessee U.S. Senator Bob Corker has said that he's not going to be running for reelection.

He said that when he ran for the Senate back in 2006, he told people that: "I couldn't imagine serving for more than two terms. Understandably, as we have gained influence, that decision has become more difficult, but I have always been drawn to the citizen legislator model. And while I realize it's not for everyone, I believe with the kind of service that I provide, it is the right one for me."

Do you think his differences and back-and-forths with the president might have played into this?

I think that Bob Corker, he is one of the great members of the U.S. Senate and the Republican Conference. He's a businessman. He came here to do something. And now he's moving on. And I hate the decision that he's made. But I completely respect it.

And we have just got to work to find another good member to come from Tennessee to take up where he's going to be leaving off.

CAVUTO: You know, Senator, I just wanted to get your thoughts as well on the president commenting his frustration, just as yours, I'm sure, with this health care repeal and replace effort that failed, that the president was bemoaning the switch of votes on the part of what he called so-called Republicans.

Are they so-called Republicans to you?

I'm disappointed that we couldn't bridge the differences. I don't think the gap was as wide as they seemed to portray them. But we have to understand that the gap is widening in terms of the cost of policies, in terms of access to care.

We have got a real crisis about to occur in just a few years from now, and I hope that these members recognize that the status quo is far worse than, let's say, what the Democrats would describe as the worst proposal that we put on the floor and that I voted for.

We have got to effect change. We have got to get to a point where people will have more than one choice on the exchanges, to a point to where, over four years, that premiums don't double again. There are a lot of structural problems with Obamacare that are going to come home to roost in a couple of years if we don't take action.

CAVUTO: Meanwhile, on the tax cut thing, is it your hope to make them retroactive?

TILLIS: Well, I think, on some of them, we can. What we have to do is figure out -- to me, I'm open to anything that I can have demonstrated to me creates economic activity, that gets us up to a 3-percent-plus GDP growth, that the models show us that it works and that we can pay for it.

But all options have to be on the table, even options that, in isolation, I may not like very much. When you do tax reform, you need to put all options on the table, model it, and then vote for the one that you're convinced will create a great economic outcome.