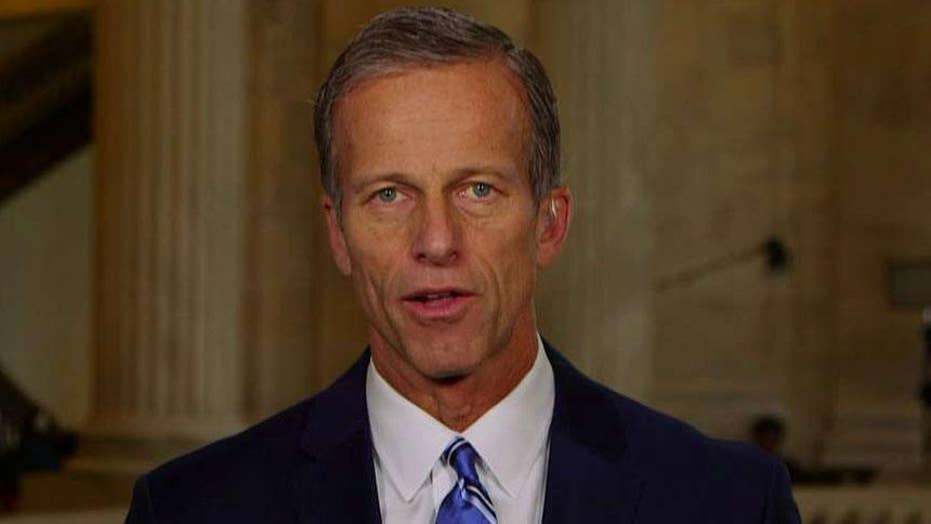 This is a rush transcript from "Your World," November 1, 2017. This copy may not be in its final form and may be updated.

DONALD TRUMP, PRESIDENT OF THE UNITED STATES: We are doing very well.

NEIL CAVUTO, "YOUR WORLD" HOST: All right, the president referring to the official release tomorrow of the House Ways and Means plan that will finally put numbers and brackets and levels to those brackets on the tax cut that he says will be the biggest ever in American history.

That is, of course, in the eye of the beholder. It will certainly be the biggest we have seen in a generation here.

Senator, we're already told that the rich might have to gulp a little bit and look at their rates staying the same. Are you OK with that?

SEN. JOHN THUNE, R-SOUTH DAKOTA: Well, what I would like to see, Neil, is all people receive tax relief from this tax reform bill.

And I obviously want to make sure that the tax burden stays similar to what it is today and that the tax relief is delivered in a proportionate way. But I'm hopeful that everybody will get their taxes lower. That's the whole purpose behind this is to allow people to keep more of what they earn and to be able to use that on their families and on their own needs and, in some cases, hopefully to grow and create jobs and expand the economy.

CAVUTO: All right, but if they were -- and this is all conjecture. And you probably know more than I do, which is probably an understatement.

But that in order to try to balance the numbers and pay for this, in order maybe even to get Democratic votes, that some of your colleagues don't want this look too skewed to the rich, and one way to ensure that would be to keep the high rate, the 39.6 percent rate, at the very rich, maybe at a million dollars and over.

If that were in fact final in the plan, could you support that, if everything else was as touted?

THUNE: You know, the answer to that, Neil, I think, is contingent on what else is in the plan.

I mean, obviously, what we have said and what the president has been saying-- we're very synced up on this with our colleagues in the House -- that we want to deliver tax cuts to middle-income families.

And they will get those tax cuts through reduced rates, through a doubling of the standard deduction, through an expanded child tax credit. And middle-income Americans need to be able to keep more of what they earn. They deserve bigger paychecks.

So, that's what this is all about. We also want to make sure that businesses get tax relief, because they create the jobs. And if you get a growing economy, and you have a pro-growth tax code, then you will start seeing better-paying jobs. And that's going to raise wages in this country.

And there are plenty of studies that show that. So, how -- the final decision is about where the rates are, who the benefits -- beneficiaries of the rates are, is still being decided. We're having conversations in the Finance Committee.

I think it's important that we maintain progressivity in the code and that-- again, that the heart and soul of this tax cut effort is middle-income families in this country, who deserve a break.

CAVUTO: Do you fear, though, that some of your colleagues, Republican colleagues, are trying too hard to win potential Democratic votes by doing something like that, by limiting state and local tax deductions or maybe slowly phasing them out for the well-to-do, to get Democratic votes, and it turns out, even after all that, you don't get a one?

THUNE: Yes, I think that, sometimes, Neil, we have the best hopes and aspirations for our colleagues on the Democrat side when it comes to voting for something, and they very rarely come through.

I think we need to write this bill in a way that is pro-growth, that gets the maximum opportunity to get the economy growing at a faster rate, so it's throwing off better-paying jobs and raising wages in this country. It needs to be about growth.

If we can get Democrats in the end for this, that would be wonderful. I'm certainly hopeful that there will be some Democrats who will find their way to vote for it.

But I think if we design this to get Democrat votes, it may not happen and you're going to be subject to the same attacks. The Democrats are going to say the same things. They're going to say it's tax cuts for the rich. That's the only -- that's their playbook. That's where they go.

And we have to go forward in a way that maximizes the opportunity for us to get a result that is good for the American people, that creates better- paying jobs, higher wages, and a stronger, more robust economy that allows people to have bigger paychecks.

That, again, is what this is all about.

CAVUTO: Senator thank you very, very much. Appreciate it.

THUNE: Thanks, Neil. You bet.

CAVUTO: I guess we will know tomorrow.

THUNE: Yes, we will.