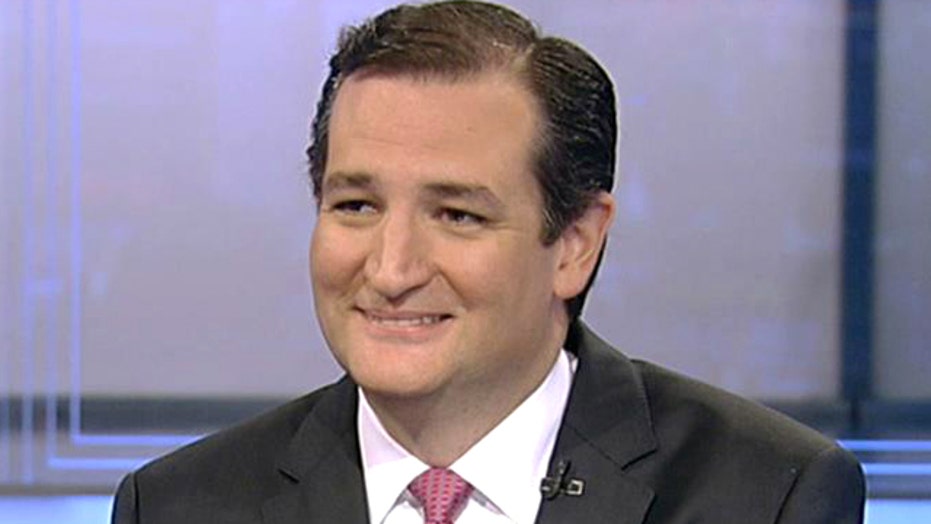 Sen. Ted Cruz leading the charge on abolishing the IRS

SEN. TED CRUZ: Look, we have seen in recent weeks that the IRS has not honored its trust with the American people; that the Obama administration has demonstrated a willingness to use the machinery of government to target their political enemies. That is wrong. It was wrong when Richard Nixon did it and it was wrong when Barack Obama did it. It's a manifestation of too much power in the federal government. When the federal government has that much power in individual lives, it's an invitation to be abused. I think we ought to abolish the IRS and instead move to a simple flat tax where the average American can fill out taxes on postcard. Put down how much you earn, put down a deduction for charitable contributions, home mortgage and how much you owe. It ought to be a simple one page postcard, and take the agents, the bureaucracy out of Washington and limit the power of government.

JONATHAN HOENIG: He who writes the checks makes the rules. And when it comes to ObamaCare of course the government writes the checks. So it's not doctors, it's not patients, it's not even insurance professionals that are going to make these rules. It's going to be government bureaucrats deciding what is healthy and what is unhealthy. It's totally political and arbitrary and ineffective. I read the 128 pages of rules; they are going to force or incentivize you to sit in wellness programs without having scientific proof that they work. Of course government will have all your private information, who is fat and who smokes and henchmen are going to be the employers. They are the ones in charge of enforcing this. It's bad from start to finish, but then again so is ObamaCare, as well.

WAYNE ROGERS: I think it's deeper than that in the following sense -- Here's a case of the government, by virtue of the health care law getting into your private life and being able to say anything. They are going to start dictating what kind of food will be served, what kind of things you're going to put on your food. In other words, it's such a massive invasion of your personal life and dictated by a law that is probably 2,200 pages long that's a mess anyway, with 20,000 regulations in it. Nobody knows what it is going to cost. Nobody knows what the ultimate is. This particular thing about legislating about food, it's another outrageous invasion of personal privacy.

JULIAN EPSTEIN: I think, with all due respect, Jonathan and Wayne have weird fantasies about what is in this bill. There's nothing new that's in this legislation. Businesses are already doing this anyway. Businesses already have in place incentive programs for wellness programs. They have co-pay programs for people that have to add more because they end up costing the system more. We have $2.7 trillion from healthcare expenditures; 50 percent of that, by estimates, is because people have unhealthy lifestyles.

TRACY BYRNES: If a business wants to charge fines for you being overweight, or offer incentives for me going to the gym, that is up to the corporation or the company itself. It is not up to big brother government.

TEACHER REPRIMANDED AFTER MAKING HIS STUDENTS AWARE OF THEIR CONSTITUTIONAL RIGHTS

JONATHAN HOENIG: He's trying to teach young people. A recent study showed only 16 percent of young people actually know anything about the Constitution, so here you have a high school teacher actually trying to teach them something about what the Constitution stands for, and of course he's shot down from the get go. What the public schools do teach now is what? Sacrifice and submission. Case in point is this requirement asking students to basically self-incriminate themselves by providing this data. I mean, if you look in the Constitution I'll tell you what you won't find -- any mention of the public schools. I think the founders understood it was really dangerous to have a monopoly on ideas.

TRACY BYRNES: They're minors. I hate to break it to you, you don't really have rights at this point. You are breaking the law. And for the teacher to evoke the Fifth Amendment at a time like this-- look, I'm all about history class. But at this point, these kids are under the protection of the school. We entrust our children to these people and the building. I want to know everything. I don't really care.

JULIAN EPSTEIN: As I always say, I hate to agree with Jonathan on principle here, but Jonathan is exactly right. It was a dumb survey. If the school really wanted this information, they would have done an anonymous survey. There are potentially really Fifth Amendment issues here. These answers to these questions go into the permanent files for the students, and the teacher was absolutely right in giving students this civics lessons. He was right on.

WAYNE ROGERS: Well, making a kid, giving him direction and saying "you're going to violate the Constitution" or give them a lesson about the Constitution are two totally different things. I agree with Jonathan, I agree with Julian. All due respect to you, sweetheart (Tracy), I don't agree because I don't think it's appropriate place for a teacher to substitute himself for the parent. The parent is going to do those things, and the teacher is doing exactly what he should do in this case.

JONATHAN HOENIG: The trend is your friend; bet against bonds with (TBX)