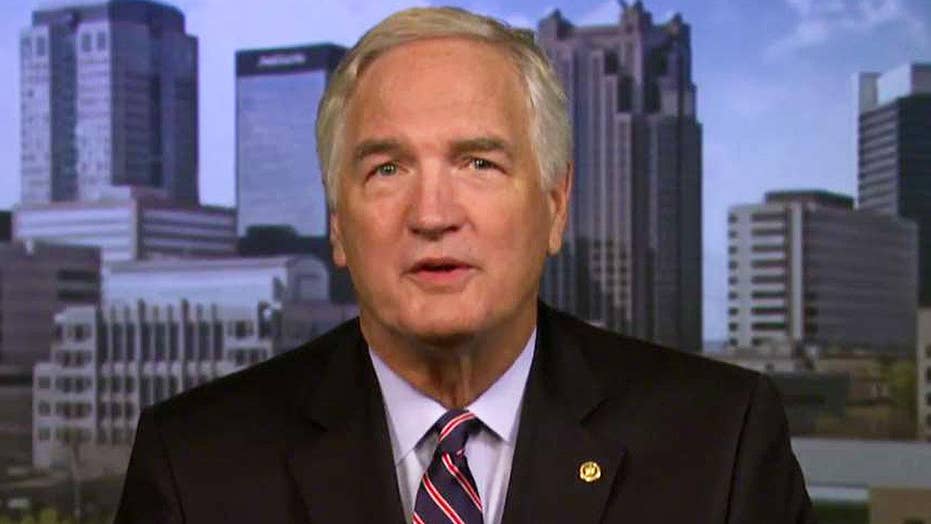 On 'Your World': Alabama senator discusses his platform, addresses the president's statements about Charlottesville

This is a rush transcript from "Your World," August 16, 2017. This copy may not be in its final form and may be updated.

TRISH REGAN, "YOUR WORLD" GUEST HOST: And then there were two.

President Trump had been pushing for the incumbent, tweeting out: "Wow, Senator Strange, Luther Strange, picked up a lot of support since my endorsements. Now in September runoff. Strong on wall and crime."

Good to have you here, Senator. Welcome.

SEN. LUTHER STRANGE, R-ALABAMA: Glad to be on. Thank you very much.

REGAN: You came in second. You disappointed?

The new -- the game starts over. We had nine people in the race. And so it ended up being eight on one. My being the incumbent, of course, you're the target in a primary like that. Now it's a one-on-one race with Judge Moore. And I feel very good about where we are.

By the way, I should point out we did call Judge Moore to see if he would come on as well. We're waiting to hear back from him.

But now the going gets tough here in the runoff. What do you think is going to help position you vs. your opponent?

STRANGE: Well, the thing that helps me the most is, I spent six years as attorney general successful suing the Obama administration, protecting the Constitution. A lot of success there.

And since I have been in the Senate for the last few months, I have been very consistently supporting the president's agenda, confirming Neil Gorsuch, for example, voting to repeal and replace.

So, I'm really running on a record of can-do conservative accomplishments, which is really what the people in our state want from their senator.

REGAN: The president is increasingly finding himself in a challenging spot. I'm sure you saw the news today. So many CEOs were abandoning his business councils. So, he got out in front of it and abandoned those councils perhaps first in a preemptive move.

It presents a challenge for someone like yourself, in that you're getting the backing from the president, and you say you support his agenda. But if he's challenged, does that affect you?

STRANGE: Well, I don't think so. I had a good phone conversation with the president today. He wished me well.

We talked about issues, really, which is what the people that I talk to as I travel the state care about. And they're really focused on, when are we going to get relief from the Obamacare disaster? It's really hurting the citizens here in Alabama.

Those are the kind of things that I'm talking about. And I think the president's position on those issues are the reason why he got such tremendous support here in Alabama and around the country.

So, I'm hoping that this campaign will go back to the issues that actually affect people's lives in the real world.

I mean, unfortunately, it's been a little derailed in terms of what the president's narrative is right now, in part because of the press conference yesterday.

Here, I want to share with you Senator Gardner's comments on exactly that. Here we go.

SEN. CORY GARDNER, R-COLORADO: The president should have immediately denounced the racism and the bigotry and the hatred that he saw in Charlottesville.

And I have said that loud and clear. And so the president has control over his staff. But what I'm saying is this. There's no room for racism, hatred or KKK.

REGAN: Do you agree with the Republican senator?

STRANGE: Well, I agree with Cory and all my colleagues that there's no place for religious bigotry, racism, the KKK, these white supremacists.

I'm a former attorney general. And I'm glad that Jeff Sessions is coming down as hard as he possibly can on them.

REGAN: OK. Finish your thought, because I think part of that, what he was saying, was that the president should be coming down much, much harder on these extremists.

And I guess I would ask you, do you agree with that, sir?

STRANGE: Well, I did agree with the statements a couple days ago, where he forcefully and very demonstrably condemned the KKK and these groups.

I wasn't, because I was tied up in the election, able to see the press conference yesterday. But everything I have seen from the president makes me feel like he agrees with all of us in the country, I hope.

REGAN: Well, the concern, I will share some of it with you, and not that we want to relive all that.

REGAN: But the concern, of course, Senator is that he already had come out and made a statement, two statements, one over the weekend, one on Monday.

And by engaging the media, as he did, he basically opened a kind of Pandora's box and gave them this opportunity to keep hitting him with, you know, allegedly being somehow tied to this extremism, which is something that he has to fight back on, and he didn't. Instead, he just went back and forth with the media on this. Was that a mistake?

STRANGE: Well, I hate to second-guess it because I wasn't there, didn't see it.

But, you know, the press likes to second-guess the president. The president likes to take on the press. And so I just hope we can all agree-- and I know we can -- that racism and this kind of behavior in Charlottesville is totally unacceptable and needs to be punishable to the maximum extent of the law.

STRANGE: Well, I'm not condoning -- yes, you know, I don't know. I hope he didn't condone anything that happened. I wouldn't -- I didn't understand that he did.

But I suspect, if there's any uncertainty there, he needs to clarify that. And I'm sure he will, because we all agree that is just -- this is not America to allow that kind of thing to go on. It's just horrible.

All right, well, thank you very much. Good to see you, Senator.

STRANGE: Thanks again. Appreciate you having me on.