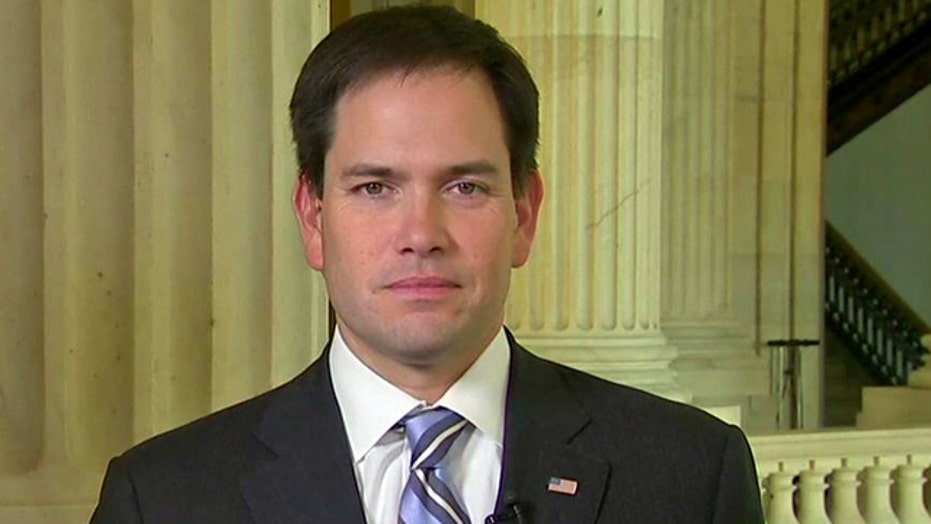 This is a rush transcript from "Hannity," April 1, 2014. This copy may not be in its final form and may be updated.

SEAN HANNITY, HOST: Here with reaction to this and much more is Florida Senator Marco Rubio.

Senator, you know, I think about small business in America. I think about Amazon.com. They're coming up with ways that if you order something, they will literally have a robot fly to your house and drop it on your front step. And then the government spends $677 million, and they still can't get it right, as the website went down yesterday for six hours. How are they going to run our health care?

SEN. MARCO RUBIO, R-FLA.: Well, I think, first of all, you make a valid point about the ability to even function. But let's remember what the purpose of this law was supposedly, and that was to help the over 30-some-odd million American citizens who didn't have health insurance to be able to have health insurance.

HANNITY: Senator, it got so bad that out in California, the hearing- impaired were actually directed to a phone number that literally put them into a sex hotline that we can't even play on the radio.

Then you have Obama -- a chapter for Obama for America in Missouri. We go to the "Hannity" big board -- says, "Not covered? Well, got a sugar daddy, mama to pay for those medical bills? Just wondering." And then they had to pull down that tweet. What's your reaction to that, Senator?

RUBIO: Well, look, I think they've used all sort of gimmicks to get people just to log onto the website and write their name in so that they could obviously go back and say, look, we hit some target.

I mean, signing up is not the issue. You still have to get people that are going to make their monthly payments. And once people begin to realize that what they're paying for comes with a high deductible and a high co-payment, that they need -- they even can't start using this health insurance until they come up out of pocket with a certain amount of money that they don't have. They're going to realize they're really not insured at all. And then you're going to see the number of people that have signed up not continuing increase. And that, too, is going to truly undermine the ability of these -- of these exchanges to survive.

HANNITY: Sure. Senator, I want to show you an interview. A reporter asked Kathleen Sebelius -- if you remember, in that one case, we had an 11- year-old girl with cystic fibrosis, and she wouldn't sign the waiver.

HANNITY: And she said, well, some people live, some people die. She was asked about the unpopularity of ObamaCare. And I want you to react to what she says here. Take a listen.

UNIDENTIFIED MALE: Sixty-four percent of Oklahomans aren't buying into the health care plan. They don't like ObamaCare, and they've been pretty vocal about it. Now, that's going to still continue to be a tough sell. But we'll see how that plays out over the coming months.

All right, Secretary Sebelius, thank you so much for being with us this morning. I think we've probably lost sound here or something.

KATHLEEN SEBELIUS, HHS SECRETARY: Well, I can hear you, but I...

SEBELIUS: Thanks for having me.

HANNITY: What is it? She had nothing to say!

RUBIO: Yes. Well, what do you say to something like that? I mean, look, here's the bottom line. There's a reason why people don't like ObamaCare, it's because this is no longer some political issue they're hearing about on the news. This is personal. It's happening to people.

The bottom line is they have disrupted the entire health care marketplace for all Americans, and all they have to show for it is a small, minuscule dent...

RUBIO: ... in the number of people that are uninsured that are now insured.

HANNITY: Let's talk a little bit about some red state Democrats that are up for reelection this year, this very important midterm election year. There you have Mark Begich of Alaska, Mark Pryor of Arkansas, Mary Landrieu, Kay Hagan. Many, if not all of them, literally are on the record saying exactly what President Obama said, If you like your plan, you keep it, if you like your doctor, you keep it. What's your reaction to that?

RUBIO: Well, obviously, that didn't happen, and now they're all -- for example, you saw a few of them last week come out with a bill to try to fix ObamaCare. You really can't fix this because we have to understand what this is.

If you had told the American people, look, we are going to pass a bill that's going to disrupt everybody's health care coverage, including the people who are happy with what they have, in exchange for insuring a couple million people more than are insured right now, people would say, that doesn't make any sense. That's a terrible trade-off. And it's going to cost us billions of dollars. And it's going to do all these other impacts that it's having in terms of costing people their jobs.

HANNITY: Yes. All right, let me pivot if I can -- the House Budget Committee with Paul Ryan earlier today, Senator -- they came out with their proposal. Now, one of the things Paul Ryan -- as we go to the "Hannity" big board here -- the U.S. debt held as a public share of the economy -- and he's pointing out that we're going to head up here by the year 2040. It's on a path. And they have offered a path that they say will literally balance the budget in 10 years, according to them, cut $5.1 trillion.I went through this.

Now, Paul Ryan put up his own bullet points on his own website here. And we'll put it up for our audience. And it, he says it balances the budget in 10 years, pays down the debt, grows the economy. There's certain things that I looked in here that I liked, as well, not only grows the economy, but when you get to some of the specifics, I like the fact that it would reform the tax code. There would be two categories, 10 and 25 percent, no alternative minimum tax. That would be erased. Corporate tax would go from 36 to 25 percent. Repeal ObamaCare, repeal the bailout of banks and Dodd-Frank. No green energy subsidies, no corporate welfare, and it would open energy exploration for the entire country.

I want to you just weigh in. Is this now the alternative blueprint? Will you sign on to this, as well, in the Senate in terms of the Republicans having a solution-oriented agenda for the country?

RUBIO: Well, let me say, first of all, I do -- I believe we need to have such an agenda, and I think Paul Ryan continues to make extraordinary contributions towards that end. I haven't read the totality of the budget. I'm sure there's some item here or there that I would want to see differently.

But by and large, it's exactly the direction we should be headed, and here's why. In that budget, you see the difference between conservatives and liberals. Conservatives trust the people. We trust what people can do when they have the freedom to keep more of their money and spend it into the economy and invest it on their own and spend it on their families.

Liberals believe you can't trust people. We've got to take more of your money and spend it on your behalf for your good. That's their attitude on health care. That's their attitude on spending. I think Paul Ryan has it right. His economy is one that will help grow our economy. And it's better than the Democrats' budget because they don't have one.

HANNITY: Yes. I like the idea of bold-colored differences, as Reagan spoke about. We'll continue to analyze this in the days and weeks ahead.

Senator, good to see you. Thanks for being with us.