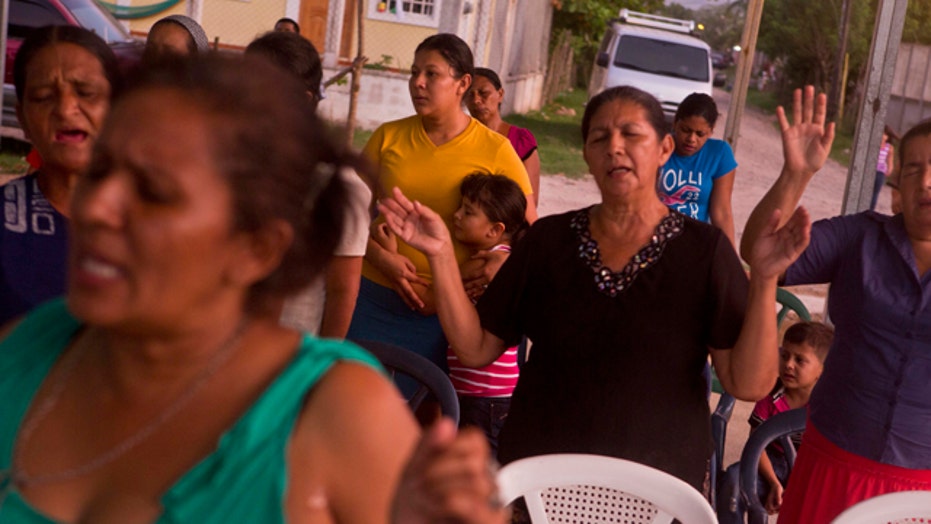 Florida Republican on 'The Kelly File'

This is a rush transcript from "The Kelly File," July 23, 2014. This copy may not be in its final form and may be updated.

MEGYN KELLY, HOST: Developing tonight, new reports on the tens of thousands of illegal immigrants, many of them children, recently dumped into U.S. cities with little more than an instruction to show up in court in a couple of weeks.

Tonight, reports out of Dallas that 90 percent of those recently scheduled to appear have no-showed. And the DOJ. reportedly admits now that at least half of the children scheduled for hearings are not showing up.

This as we learn the immigration courts already have a backlog of some 375,000 cases. Surely everything will be rescheduled soon.

Joining me now, Florida Senator Marco Rubio. Senator, thanks for being here. And so, these children who we've rounded up, put on buses and sent into various American cities are not showing up for their scheduled court dates. Surprise, surprise.

SEN. MARCO RUBIO, R-FLA.: Well, we have always said that one of the things that's driving them here is this idea that there's this new law in America that if you come, you're going to get to stay. And people would counter and say, well, there is no such law, but in practice that's exactly what happens. And people know this, people understand this and the word gets around word of mouth is really what's driving this issue. And it's clearly understood if you enter the U.S. as a child or as part of a family, you're going to be let free into society, they can reunite you with a family member. And then they know that there's these huge backlogs for these dates in court and quite frankly many never intend to show up these dates in court. So, in practice the fact is that the way this law is put in effect, if you do come to the United States as a minor or as a part of a family, you are going to get to stay.

KELLY: Uh-huh. That's exactly what's happening because they're not showing up and we don't have the manpower to go out and round them up. Nor if we ever get them into court do we have the resources at the time or enough judges and so onto to actually follow through on any, you know, posed threat.

But in the meantime there's a big contingent in this country that's pushing to remove that threat altogether saying that we need to be humane, that's the word, American, another word being bandied about. And let them stay. And there was an article in the New York Times today talking about the push by many religious leaders in this country from various states to let them stay. What do you say?

RUBIO: That would be a big mistake. I agree we need to be humane. That's what Americans have always been and that's why we're so concerned about how children are being treated when they're in our custody. But what would be inhumane is to allow this to continue. And the only way we're going to stop this from continuing is if in fact that people are returned to their home country. The word -- just like word is getting out c you should come, the word would get out that things have changed and that people are being sent back and that would stop the flow.

KELLY: But we have people that come on the show who feel the other way. Who say, you're talking about returning them to drug dealing, drug- cartel run neighborhoods back in El Salvador and so on. How can the United States turn a child back into an environment like that?

RUBIO: It is clearly a difficult issue in terms of that and because of the humanitarian aspects of it. The problem is what you've just described that can be found in a number of countries all over the world. And the U.S. can't absorb everyone that comes from a country like that, as difficult as it may be from a humanitarian standpoint. Now maybe there are other countries in the region that are willing to work with us and accept some of these children, maybe Mexico would be step up and take some children. Maybe Panama and some of this other countries in the region would step up and do their part in terms of doing this. But America can't handle all of this.

And I think it's important to remember that every single year 1 million people immigrate to the United States legally. There's no other country in the world that even comes close to that figure. I think that's a testament to the openness of the American people. But we also are a sovereign country that has to have laws and a process by which those laws are followed.

KELLY: Meantime, John Boehner over in the House is working on a group that would come up with some sort of proposal to address this situation and already critics are saying one thing he doesn't look at is the effect of all this on American citizens. And how -- you say that we cannot absorb all these children. A hundred thousand in just the past two years, what is the likelihood? I mean, where are these kids going? Are they being set up for success?

RUBIO: Well, it depends. I mean, some of these children are still in custody because they haven't been able to be reunited with family members, others are being released to family members and they now become part of our country. And quite frankly many of them will never hear from or see again until some point in the future. I mean, they'll be in our schools and so forth. So, it's really difficult to tell.

We're also hearing reports that many of these children are actually coming with their parents and when they get to the border their parents go one way, the children turn themselves into the authorities. And then a family member comes forward, claims the children and the family's actually being reunited in the U.S. And we're actually -- we've heard that from authorities in some of those countries in Central America. And tomorrow I'll send a letter to Jay Johnson asking very specifically about that.

KELLY: Senator Marco Rubio, thank you for being here, sir.