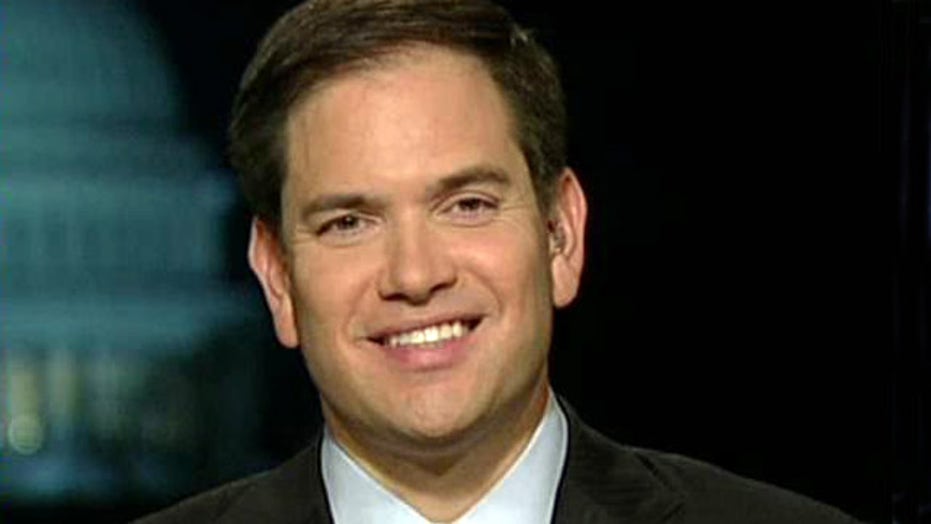 Lawmaker believes colleagues should live under the law

This is a rush transcript from "The Kelly File," December 11, 2013. This copy may not be in its final form and may be updated.

MEGYN KELLY, HOST: Well, the Health and Human services Department today announced that a little more than 300,000 people have signed up for ObamaCare through the federal and state exchanges. Though they have not said how many of those actually paid for their policy yet. And there is no coverage unless you pay. One of the people now enrolled in ObamaCare, Florida Senator Marco Rubio. Senator, good to see you now.

KELLY: And so, already some of your critics are saying, well, that's hypocritical of you to enroll and take the federal subsidy since you have been critical of this law. To them, you say, what?

RUBIO: Well, first of all, we are supposed to live under the same laws everybody else is. So, if everyone else is being force to go on ObamaCare, why shouldn't members of Congress be forced to be on it as well? I didn't vote for the law. I wasn't here when it passed. But I don't think I should go back to Florida and tell people that I got an insurance plan that they don't have. As far as the subsidy, it's not a federal subsidy. It's the employer contribution made by the Senate. Senator Vitter has proposed eliminating that. I would support that.

But in the interim, I'm going to follow whatever law that applies to everybody else. I don't think members of Congress should be able to have laws separate from the laws that everybody else has to live under.

KELLY: Now, in the meantime, you and your Senate colleagues got some emergency letter today from the Dispersing Office, sending an urgent mass e- mail to everyone saying, you think you may be in ObamaCare but don't trust any confirmation you received from the D.C. health exchange. Don't rely on your My Account page. If you don't have a confirmation letter you are not enrolled and so on. The American people unfortunately are not going to get any correspondence from the Senate Dispersing Office.

KELLY: Your thoughts on how this is now working. I mean, you think you're enrolled, you may not be enrolled, check with the Senate. What?

RUBIO: It's extremely disruptive. Now look, for members of the Senate, like you said, there is a dispersing office out there alerting people that they may have a problem. And it's not just members, by the way, it's staffers and people like that.

But what about the American public? I had someone approach me on Sunday at a wedding who said that her deductible was now close to $6,000. So, she's basically in her mind uninsured. Because she doesn't have $6,000 and she's going to have to come up with $6,000 just to begin to access the health insurance that she now has.

So, all of these changes, not just what you have outlined but all the others that we are seeing are going to prove to be extraordinarily disruptive to millions and millions of people across the country.

KELLY: On the subject of the 300,000 enrolled so far, it's too little. They don't have enough people. They wanted 7 million by March and they are not getting them at this pace. I mean, anything could happen I suppose by March. But right now, they are nowhere near on track. And the problem for them is even the numbers they have were told include disproportionately small number of the healthy young people they need for this law to work. That means the insurance companies have a different risk pool than the ones they bargained for.

KELLY: But HHS and the ObamaCare administration foresaw this possibility to some extent and guaranteed the insurance companies a form of bailout or however you want to call it, if the risk pool wound up being bad for them. The insurance companies are getting ready to ask for that bill to be paid. And we the American people are the ones paying it.

RUBIO: Well, I hope people will be outraged by it. Look, this is called the risk corridors. And the concept is, most companies are going to make money. A handful may miscalculate. You don't want them not to be able to pay benefits and so you have this risk pool that comes in and primarily helps them out or bails them out.

But in this instance, because of the problems you've described, the exchanges have actually become the equivalent of a high risk pool of very sick people, older people, people that cost a lot more money to insure. Meaning, that's not what these companies bid on.

RUBIO: So, two things are going to happen. One, they're going to come to the federal government for money to help them out with their losses and two, next year they're either not going to try to be a part of the exchange or they're going to dramatically raise premiums and deductibles.

RUBIO: And that means even less people are going to sign up which means even more companies are going to be bailed out. So, this needs to be addressed. Again, it's just one more of a series of rolling disasters that this law is producing.

KELLY: Before I let you go, there is a budget deal in Washington. But already folks are coming out for and against it. And you're one of the senators who have come out against this deal that's been struck on a bipartisan basis. John Boehner, speaker of the House, which is of course not the chamber you are in, but he came out and said, those who are opposing this deal are quote, "Using the American people for their own purposes. This is ridiculous," he said. Your thoughts?

RUBIO: Well, look, unfortunately the budget, what it does is increases spending by about $60 billion over the next two years. Going above this cap, which by the way Congress imposed on itself, meaning these caps now that they've passed in Washington are meaningless, because they come back a year later and go over them.

But here's the problem, it raises it by $60 billion, the spending, but it pays it over 10 years. Well, you know how that works. I mean, over the next couple of years they'll forget it. And they will keep borrowing more.

KELLY: Good question, Senator Rubio. We'll save it for another time. Thank you, sir.