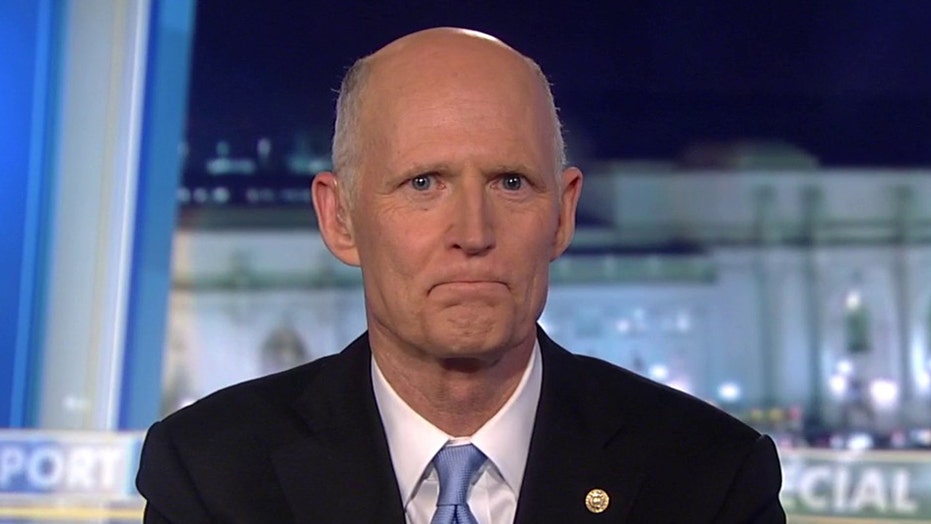 This is a rush transcript from "Special Report with Bret Baier," January 28, 2020. This copy may not be in its final form and may be updated.

BRET BAIER, ANCHOR: Breaking tonight. We told you at the top of the program, Senate Majority Leader Mitch McConnell, says he does not have the votes at this moment to block the calling of witnesses in the president's impeachment trial. Let's get reaction tonight from Florida Republican Senator Rick Scott, just back from the Senate.

Senator, thanks for being here. We reported based on a source, Wall Street Journal had this pop-up late -- just minutes ago, "McConnell says GOP does not have the votes to block impeachment witnesses." Where does it stand tonight and what's your feeling on the Hill?

SEN. RICK SCOTT, R-FLA.: Sure. Well, I can't talk about caucus meetings but I can tell you, I believe that on Friday when we get to decision whether we're going to have witnesses, we're not going to do it.

I mean, there is no logic to doing it. The House had their opportunity to take John Bolton. They could've subpoenaed him, and they elected not to. So, you can't feel sorry for them. They -- they've had their witnesses. Actually, they didn't even present all the witnesses you realize. And inspector general, they did the testimony and then didn't release it.

BAIER: So, is this a vote count to try to get more votes to understand that this trial goes on? If you don't vote to block witnesses, what is this by the majority --

But, it is the responsibility of the Democrats who said they had overwhelming evidence and had every opportunity to call people like Joe Biden to -- or to John Bolton to do it, and they failed to do it.

BAIER: So, they would say that this element about the book and about the manuscript came out afterwards and here it is in -- according to The New York Times, black and white, we haven't seen the manuscript, I assume you haven't either.

SCOTT: I haven't seen it.

BAIER: And in which allegedly, he writes that it's the heart of the issue that the president, in fact, held the aid to demand the investigations into Joe Biden.

So, the president released the tape of our -- at least the conversation. There is no quid pro quo in there. They'd actually, the Democrats didn't say that. In the end, they didn't say there was one.

They -- he -- they had the meeting. They released the aid. So, I don't know what the Democrats case is. And then -- and then, when argue of obstruction of justice, presidents from the time of George Washington, have the right to withhold, you know -- you know, use executive privilege.

And so, they're saying this president can't, but all the other presidents can. So --

BAIER: So, are you saying that it was a perfect call?

SCOTT: I mean, there is no perfect calls. But did the president do something wrong? Did he -- did he -- I mean, did he say you've got to do an investigation, I will give you money? No, he didn't do that.

And there's no evidence. There is nobody -- there's nobody that they had that has --that they provide testimony on that said that.

BAIER: Right. But what if John Bolton did? What if he was?

SCOTT: That was -- that was the House's responsibility. They, -- look, John Bolton, they --

BAIER: I'm just asking what they are saying. I mean, that's -- they're saying here is John Bolton, and he's going to say this, allegedly. And what if he does say that? You're saying there isn't a witness, but he could be that witness.

Now, you have former White House Chief of Staff John Kelly, saying, I believe John Bolton. I mean, it seems like this snowball and you say you're confident that witnesses won't be --

The Democrats, the House Democrats said they had overwhelming evidence. This was their impeachment. We didn't vote in the Senate to do this impeachment. They had all the time and they -- remember, they are the ones who elected not to go to court, not to call these people, not to go ask for the documents. They are the ones who did it, not, not the Republicans in the Senate, the House Democrats did it.

BAIER: So, even though we're reporting that, that McConnell has told GOP senators, he does not have the votes, you're convinced that he will, you all will and that it is defensible to not have witnesses in this environment.

SCOTT: I -- here's what I think. We've got two more days of question and answers. I believe that we're going to make the decision not to ask for witnesses because it's not our job to prove the House's case. It was their job to prove their case.

And I think that -- I think the White House Council did an unbelievable job. Whether you can say this, what -- even if you said it, and what he did he knew they say what he did, it's unimpeachable.

BAIER: I understand that's what Alan Dershowitz said on the Senate floor last night in his argument. I want to play this ad. This is an ad that you are running in Iowa currently. Take a listen.

SCOTT: We'd like to thank the Democrats for battling botchy in this impeachment charade. And for spending so much time in a cover-up for Joe Biden. The real story here is the corruption Joe Biden got away with.

Vice President Biden threatened the foreign country and forced them to fire prosecutor who was investigating a company paying less than $83,000 a month. Biden got away with it and his son got paid.

BAIER: And you're actually running that ad.

SCOTT: Absolutely. Here is what's frustrating. You sit there on the Senate floor with only milk and water. You sit there and you listen to them say, oh, Joe Biden, what he did was perfect.

I think that guy -- and he said it, he got a prosecutor fired that was investigating that company. He was a son who gets -- was getting paid $83,000 a month. And the media's and the Democrats are saying, well, it's OK.

But the president who has a right to fire any Ambassador he wants, there's something sinister with that, you can't roll boy out, you did that, that was really bad.

BAIER: So, you know that Joni Ernst came out and said that, you know, she would be interested to see how this all affects Biden in the Iowa caucuses. She got a lot of grief from Democrats and other media folks, saying you're making it all about politics and that proves the point that it was always about Joe Biden. Isn't this ad doing roughly the same thing?

SCOTT: I think -- I think the Democrats have been covering up from Joe Biden, helping him all along. I mean, why did -- why did Pelosi wait 33 days? Now, Sanders and Klobuchar and Warren can't go to Iowa?

I mean, and then they -- how much time did they spend in this -- in their three days talking about Joe Biden, and this was there was nothing wrong with what he did.

So, I think -- I think this is clearly everybody is trying to help Joe Biden.

BAIER: So, you want to make sure that Iowans know the story?

SCOTT: I want to make sure that we have a focus on a vice president the sat there and said he got a prosecutor fired. That's wrong. And let's, let's have a conversation. Let Joe Biden come out and explain why he did it.

BAIER: So, why not call for witnesses and call Joe Biden or Hunter Biden?

SCOTT: I think it's -- I think, the way I look at it, it's a totally separate issue. The House Democrats, they had said they had an overwhelming case. They had all the time to call all these people.

The inspector general of the intelligence, they didn't release what he said. What did he say? And this is all orchestrated. It's all partisan. And let Republicans to participate it.

BAIER: And you don't have any problem with what you've learned in the presentation-- of how the House managers put it forward or what you know happened inside the White House.

SCOTT: Well, we got two more days. I'm going to listen to the -- you know, the question and answers. We'll see what comes out of that, but the base of what I know now the House -- the House Democrats have don't have a case, and the White House has done a great job of explaining what the press -- why the president did what he did.

BAIER: After the whistleblower story came out, but go ahead.

SCOTT: Yes, but he -- but they got the money in the timeframe they're supposed to, right? OK, he had the meeting. So, all the things are said, all these bad things, It's all about thought rather than actions.

BAIER: Senator, we'll see if it turns out the way you think. We appreciate your time on this busy night.