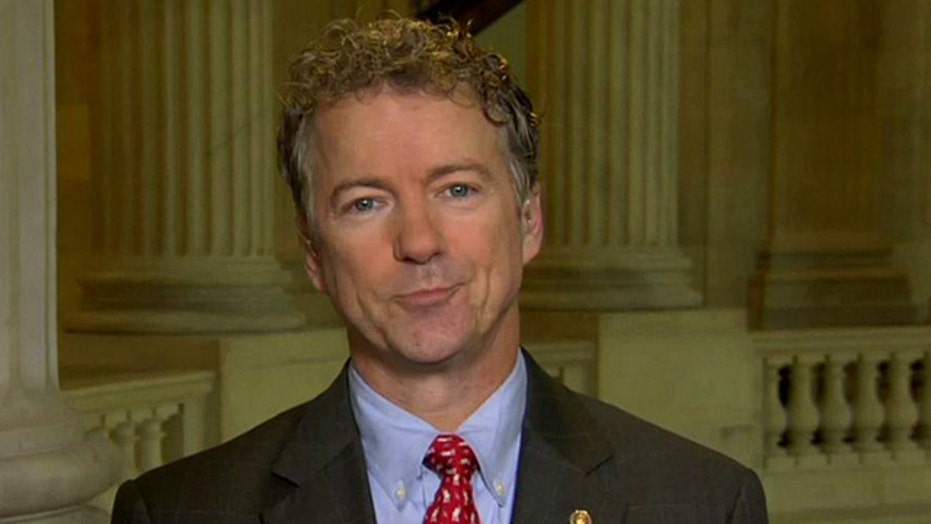 This is a rush transcript from "Hannity," March 6, 2014. This copy may not be in its final form and may be updated.

SEAN HANNITY, HOST: My next guest will have a chance to address the audience tomorrow at CPAC, and he joins me now to tell us what we can expect to hear, Kentucky Senator Rand Paul. Senator, welcome back. How are you?

HANNITY: Did pretty good in this Washington Post/ABC News poll, and of course, the other poll had you ahead by a pretty large margin. But besides Mitt Romney, who we know is not running, you're the leading Republican at this time for 2016. Your reaction.

PAUL: I think that might be bad luck. I'm going to try to move back a little bit. So I'd rather be the underdog. Being ahead, yes, that doesn't sound like a good place to be.

HANNITY: Look, you've had this ongoing spat with Chris Christie. We all know the issue with him and Romney before the election, the embrace of President Obama. And you asked to sit down with the governor, have a beer summit. He said no. He rejected that offer. Why do you think that is?

HANNITY: He's been there today.

PAUL: I said -- yes, I've offered him to have a glass of Kentucky bourbon, as well. But no, I think, really, we're getting beyond all that. I think, really, this needs to be about, you know, issues and how we can grow the party bigger. And it's a big party. It can include a lot of people from different strains -- moderates, independents, conservatives. I think the party has a lot of room for people in it.

HANNITY: Conventional wisdom among some is that he was hurt over this bridge scandal issue, which he says he's not going to address anymore. Do you see anything long-term, long-lasting with that?

PAUL: You know, I don't know. I haven't really followed the details closely. I think that -- I think people in general, though, don't want to believe that their government, the power of government is used to punish their enemies. I think that's one of the reasons why we've been so unhappy with the president over the IRS scandal is that it looks like he's been using the full force of government to punish people that disagree with him politically.

So from that point of view, I think that that's one thing that is unacceptable. Now, on the facts of the matter, I don't know the facts of the matter and haven't followed it that closely. But I think it's very dangerous territory for a politician to be accused of using their office to damage their political opponents.

HANNITY: All right, every poll shows, including the latest Fox News poll, that the president's approval rating now down to 38 percent. We see huge opportunities for gains in the Senate. What I feel is missing from the Republican Party -- and Donald Trump addressed this today, as well -- is I think that they -- they're not showing enough courage in articulating their vision for where they want to take the country. Am I right or am I wrong?

PAUL: Well, you know, there are competing influences in the Republican Party. We've lost two presidential elections in a row. So some people say we need to dilute our message, we need to become Democrat-lite. And then there are some like myself who say, No, no, we need to be more bold with our message. We need to be the party that's not for revenue-neutral tax reform, we need to be the party that actually wants to lower taxes to stimulate the economy and be proud of that, and that it will help poor people, it'll help the unemployed if we lower taxes dramatically. And I think that's being more bold, and I think that actually will bring more people to our cause.

HANNITY: But are there enough people like you and Cruz and Rubio and Mike Lee and some more conservative House members that are able to bring the leadership along to get them to really advance that? In other words, let's say you win the Senate back. You have the House and Senate, but you still have Obama as president. What can you realistically expect to accomplish under those circumstances?

And frankly, when I was there, many people came up to me who voted for the president and said, We haven't seen the president. What does he have? What ideas does he have for Detroit? And they are open to the message of Republicans. So I think, frankly, if we do that and we're bold and we're for reducing taxes, particularly for people who live in poor circumstances, I think people are going to look to us who haven't looked to us before.

HANNITY: Here's my prediction. I think you'll get a very warm reception tomorrow for your speech at CPAC. Just a prediction.

PAUL: We're looking forward to it. It's an exciting time. A bunch of young people, and we love to see them on their feet cheering for liberty and limited government.

HANNITY: All right, Senator Rand Paul, thanks for being with us.