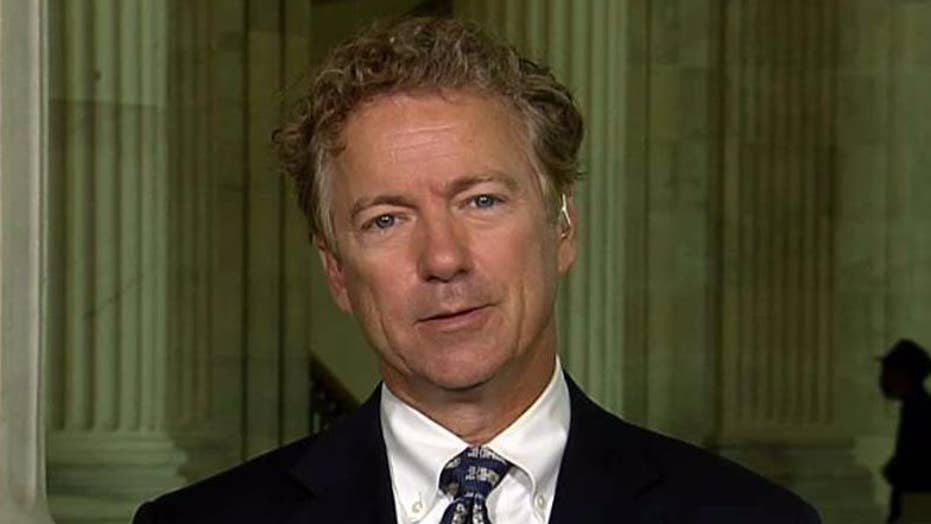 On 'Your World,' lawmaker advocates for a 'big tax cut'

This is a rush transcript from "Your World," September 14, 2017. This copy may not be in its final form and may be updated.

NEIL CAVUTO, "YOUR WORLD" HOST: All right, on the 25th, the president making it very clear that's the day he hopes to have most of the broad details of his tax cut exposed to the nation.

Now, not everyone is saying that date will necessarily jibe with their calendar, because we heard from Kevin Brady, who runs from the House Ways and Means Committee, that those details might not be available that day.

But the president making clear at a gaggle on Air Force One -- we will get to that in a second -- that it will be and the details will be there for everyone to love and appreciate and ultimately pass with a good deal of Democratic support.

But some Republicans are concerned that the president is making all the overtures to Democrats and not to Republicans.

I'm not quite sure my next guest is among them, but he is here, Kentucky Republican Rand Paul.

Senator, your colleague Chuck Grassley and many in the House, members of the Freedom Caucus, what have you, are expressing frustration with the president reaching out to Democrats, it seems to their exclusion, or that's what I'm reading. What do you think?

We're still hearing the words tax cut from the president, not revenue- neutral, not a tax-shifting bill, but a tax cut. So I'm still encouraged. The fact that he's talking to Democrats, diplomacy is a good idea.

We will see. The proof is in the pudding what gets put forward. From my perspective, it needs to be a big tax cut, return the money to its rightful owners, and you will see growth.

CAVUTO: You mentioned revenue-neutral, Senator. And the president did discuss that in this gaggle on Air Force One.

It's kind of hard to hear, but again this is the president and his interpretation of what would be a revenue-neutral tax cut. Listen to this.

DONALD TRUMP, PRESIDENT OF THE UNITED STATES: It will be revenue-neutral when you add growth, because we're going to have magnificent growth.

If you like at GDP for the last quarter, it was 3 percent. Everybody was shocked to see that.

CAVUTO: All right. It will be revenue-neutral if you add growth.

By that, I guess he's saying if you include dynamic accounting and the bang for the buck you get cutting taxes, estimates put just 1 percent more growth, if we up to 3 percent growth, it's 2.5, 3 -- extra dollars to federal coffers over the next decade.

Are you in the camp that that is how this thing, whatever ultimately comes out, should be scored?

PAUL: Well, I'm in the camp that we give too much credence to anybody that makes economic models in Washington.

PAUL: But if you make an economic model and you're not going to say that changing tax policy affects economic growth, you might as well stick your head back in the hand and go into some other profession.

But as a consequence, we should make government spending smaller to pay for it. And so we will see what happens. But that's what I'm going to advocate for.

There's some frustration already on the part of those who have heard Speaker Paul Ryan, your colleague in the Senate Orrin Hatch saying it's unrealistic to think corporate tax rate could get down to 15 percent. Probably 20 to 23 percent. I'm paraphrasing, Senator.

But they're already coming out of the gate with a higher figure. Still substantially below the 35 percent prevailing corporate rate, but what do you think of that?

PAUL: There's one thing about negotiating. If you put forward 15 and someone says 25, and you wind up with 20, that might not be so bad.

But if we start out at 25 and we have 35, we're going to wind up with 30. So I want the president to hold his guns. I'm out there supporting a 15 percent rate. And I will support it as long as I think we can get it.

And I'm going to try to get as close to that as we possibly can. We need to compete with the rest of the world. Look, you can move your business to Ireland and pay 12 percent. You can move throughout Europe and actually pay high teens, low 20s. And we're at 35 percent.

So for America to compete, to have jobs here at home, we have to have tax rates that make us competitive with the world.

CAVUTO: If the rich are not included in this tax cut, what do you think of that?

PAUL: There won't be any tax cut then. The rich pay most of our taxes.

And those that make $75,000 and above pay 96 percent of the income tax. So if you say, oh, we're going to only give tax cuts to the middle class that make less than $75,000 a year, there's not enough money to stimulate the economy. So, it really have to be across the board.

PAUL: No, I think what I'm saying is that what I'm going to advocate is for the bigger, the better.

I want the biggest tax cut we have ever had in our history because I want the biggest economic growth. If you give me less than that, but it's still a tax cut, yes. But I would rather not start my negotiating position by saying I'm going to take a piece of you know what that is a tax-shifting bill which marginally lowers the rate. I'm going to advocate for what I am for, and that is a big tax cut. And then we will see where it winds up.

CAVUTO: Senator, the president was also talking about DACA and his overtures that have gotten some of your colleagues a little upset to Democrats, getting them on board with a plan that would keep the children of illegal immigrants here.

They're not kids anymore. They're in their 20s, most of them. But that it had to be pegged to building that wall. What do you think of that?

PAUL: The compromise that I have been floating is this.

If you normalize or internally immigrate these DACA children that were brought here as children, if you do, count them. We have about a million immigrants each year. What I would do is, I would normalize about 200,000 DACA kids each year for five years, but I would count them, so you wouldn't expand immigration.

That I think would be the compromise. You're having some compassion for these kids who mostly know only America, but you're counting them in our total immigration.

CAVUTO: Finally sir, you have been leading an effort through several administrations, at least the last two, for war authorizations, whether in Iraq or elsewhere, Afghanistan, I guess, by definition, Syria these days.

But they keep getting shot down. What is -- what do you do now?

This is true. It's incontrovertible. Read The Federalist Papers. It's everywhere. Washington, Jefferson, Adams, they all agreed to it. Madison.

And so my colleagues have forgotten this. And some of them think the president can fight unlimited war. I think we should vote on them. It's the most important vote any legislator should take. And I'm going to keep agitating for votes.

I got a vote yesterday. And in that vote, they voted against me, but we did actually have some debate over whether we should be at war. And that was a step forward.

CAVUTO: What does the president tell you?

PAUL: You know, I talked to him last week. But we didn't get to that.

If I can get him on the golf course again and have a few hours with him, I'm hoping maybe we can discuss the War Powers Act.

CAVUTO: All right, Senator Rand Paul, keep me updated on that.