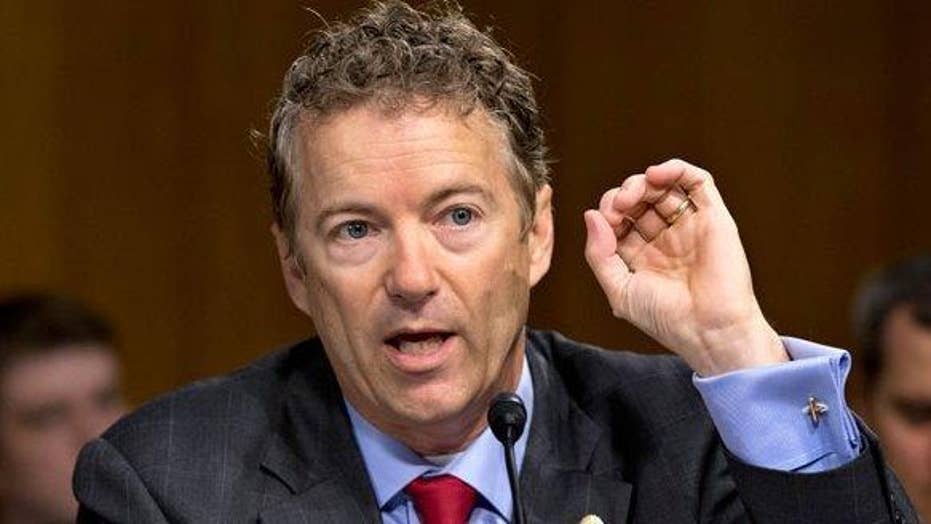 On 'Your World,' lawmaker discusses his opposition to the Republican health care plan

This is a rush transcript from "Your World," July 14, 2017. This copy may not be in its final form and may be updated.

NEIL CAVUTO, HOST: All right, if Kentucky senator, former presidential candidate Rand Paul is intimidated by the strong-arming that's been coming from the White House these days to try to get this health care thing sealed, done and out of there, he has a funny way of showing it.

While he's met with the president and hopes to find a solution to try to get past this impasse, he's already indicated -- that is, Senator Rand Paul-- that, as far as this latest deal is concerned, he's a no vote, and, furthermore, even against a procedural vote on it scheduled for early next week.

He joins us right now on the phone.

CAVUTO: Are you worried that is going to get the president very angry?

PAUL: You know, I spoke with the president yesterday. And I think he's very interested in what conservatives want. I think he considers himself to be from the conservative wing of the party.

And I think he truly wants what most of us want, which is repeal of ObamaCare. And I think, if it doesn't happen, if the Senate leadership can't put it together, my hope is that he steps into the fray and helps push this along.

He's indicated that he's open to my idea, which is separate it into a clean repeal, like we promised the voters. And then, if there are spending projects that moderates want that weren't part of the promise to repeal, put them on a bill they can work with Democrats on.

There are many must-pass bills or supposedly must-pass bills that will come up. And the Democrats and the big-government Republicans could work on the spending plan, and the rest of us, including the moderates, could vote on a clean repeal.

CAVUTO: Don't you think we're kind of past that, though, now, Senator?

And I'm just beginning to wonder whether there's a new sentiment building -- and maybe this is where the president is coming from -- anything is better than the law we have, and something is better than nothing, and it leads the way to tax reform. So, get out of the way, Rand Paul. Come along.

PAUL: No, I think we haven't gotten to my solution yet.

The new solution has to fail to get to my solution. And the reason I'm against the current bill is, I think it's ObamaCare-lite. I think it doesn't fix the fundamental flaws of ObamaCare. The fundamental flaw is that, if you make insurance expensive to buy through regulations, but then tell people they can buy it after they get sick, it leads to the death spiral we have with ObamaCare.

CAVUTO: So, what happens in the interim?

Why wouldn't you want to encourage this debate? Because you're very, very good at getting through all of these key points. But if you don't allow a procedural vote, people will interpret that as you're being obstinate, you're fighting with the wishes of the Senate majority leader.

CAVUTO: But a procedural vote isn't the same thing, right, Senator, as saying you're going to -- you will buy the whole thing hook, line and sinker, right?

PAUL: Well, but if you watch the Senate closely, the way it works is, once you get on the bill, it will be rammed down our throats. No amendments will pass. They're going to say, oh, well, we have an open amendment process.

CAVUTO: So, you're not budging, even if it means it's going to alienate you with Mitch McConnell and maybe with the president of the United States?

I keep proposing new solutions. And the new solution that I think will work for everybody is split the bill in two, have a clean repeal, like we promised, and then if the big-government Republicans want spending programs, they want bailouts to insurance companies, they can do that with the Democrats.

Real quickly, Senator, Tim Scott was telling me earlier today that he would be open and wanted to remind conservatives, maybe, by extension, folks like you, Senator, that if you're worried about keeping those taxes in ObamaCare, don't worry, because they can come out in a tax reform measure and effort later on.

I think that's the gist of it. What do you make of that?

PAUL: I guess my problem with that suggestion is, any time in Washington they tell you they're going to do it at a later date, it means they're really not going to do it.

The most common thing on the floor, when you bring something up they don't like, is, well, Senator we really love your idea. It's a jolly well good idea, but you're just not bringing it up at the right time. If you will wait your turn, until you're older and wiser, we will listen to the committee in 10 or 15 years and then maybe we will bring you issue to the floor.

Now, it's always a promise. It's a false promise. If they don't have the guts to repeal the ObamaCare taxes now, they will never have the guts. And it's disappointing. Look, this is what we ran for four elections. Republicans ran four times and won every time on repeal ObamaCare, and now they're going to vote to keep it. Disappointing.

CAVUTO: All right, Senator, we will watch very closely. Thanks for taking the time.