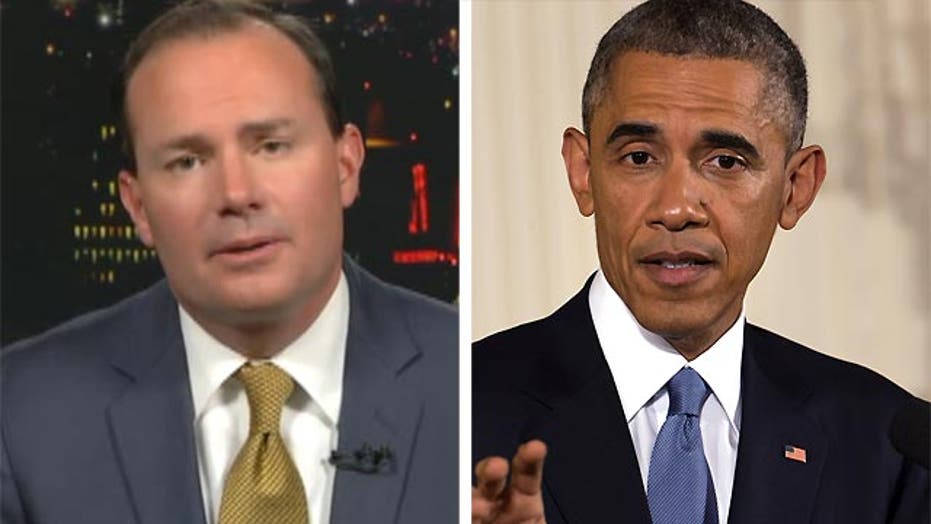 This is a rush transcript from "Hannity," November 6, 2014. This copy may not be in its final form and may be updated.

PRESIDENT BARACK OBAMA: Before the end of the year, we're going to take whatever lawful actions that I can take that I believe will improve the functioning of our immigration system.

At the same time, I'll be reaching out to both Mitch McConnell, John Boehner and other Republican, as well as Democratic leaders, to find out how it is that they want to proceed. And if they want to get a bill done, whether it's during the lame duck or next year, I'm eager to see what they have to offer.

But what I'm not going to do is just wait. I think it's fair to say that I've shown a lot of patience and have tried to work on a bipartisan basis as much as possible, and I'm going to keep on doing so. But in the meantime, let's figure out what we can do lawfully through executive actions.

SEAN HANNITY, HOST: All right, there you have it. The president vows to take executive action on immigration before the end of the year, whether Congress likes it or not. So is the commander-in-chief's amnesty agenda on the verge of coming to fruition? What are the new Republicans going to do to stop this?

Joining me now to respond -- Utah Senator Mike Lee is with us.  Senator, I know you signed a letter with five of your fellow senators to Harry Reid saying that, in fact, that you are going to stop all action in the Senate if the president does this. What are you going to do specifically?

SEN. MIKE LEE, R-UTAH: Well, we think it's important for us to refuse to fund the president in his attempt to violate the law. Now, he used the word "lawful" or "lawfully" no fewer than three times in the clip you just played. But if what is rumored to be in the works is, in fact, going to happen, it'll be anything other than lawful. If, in fact, what he's going to do issue an executive order, just giving out Green Cards to millions of Americans who under the law, as it's written today, is not in effect, that's not OK. That's not lawful. And we'll do everything we can to stop him, including withholding funds from his ability to carry out that project.

HANNITY: OK, but you don't have control of the Senate until January.

HANNITY: Let's say he does this now. Does Harry Reid have the ability to stop you? Or are there parliamentary maneuvers that you can use in the Senate to prevent him from going forward with any other business?  What else can you do?

They deserve to have their wishes respected, and I'm going to do everything I can to fight to make sure that happens.

HANNITY: It was interesting. I read the letter that you sent to Harry Reid. And you said in that letter the Supreme Court has recognized that over no conceivable subject is the power of Congress more complete than its power on immigration. That's deep, and that's profound.

So I want to explain to people at home why the president may not have the authority to do this. We have an immigration law in this country. The immigration law does not allow for the amnesty that the president wants to grant. So instead of going back to Congress -- we have co-equal branches of government, separation of powers -- that's how we pass laws. You guys pass them, he signs them or he vetoes them. But rather than go back to you, he's just going to write executive fiat. Well, if he can do that on this law, can't he do that on any law?

LEE: Yes, which is precisely the problem, which is precisely why we've got to lead (ph) out on this issue and make sure that he doesn't lead us from behind into a constitutional crisis. Look, Sean, Article 1, Section 8 is very clear. The power to come up with a uniform set of laws governing immigration and naturalization belongs to Congress, not the president. Our existing immigration laws do not give the president this kind of authority to issue this kind of executive order.

HANNITY: You know, the president's done this on welfare. He's done this already with the Dream Act and some other actions on immigration, the appointments when the Senate wasn't in recess, which he got rebuked by the Supreme Court.

To me, it seems that this president is defiant. He said he heard the American people, but he doesn't really seem to hear the American people.  Is he bringing us to a constitutional tipping point? Liberal Democrat Jonathan Turley, George Washington University, has said that he thinks this is a tipping point, that he is pushing executive powers to the brink and bypassing the constitutional authority of Congress.

Why wouldn't Democrats want to preserve their own power?

LEE: They would, and they should. And privately, some of them have told me that they do share concerns like these with the president exercising too much power. Several of them told me that privately in the wake of the president's recess appointments at a time when the Senate was not in recess.

But publicly, for whatever reason, they weren't inclined to express that. So it's -- it's a problem. But look, the good news, Sean, is that we do have the power to stop him. We have the power described by James Madison in Federalist 58, to withhold funds from the president for his ability to do this.

HANNITY: Power of the purse. Yes. All right.

LEE: Power of the purse.

HANNITY: Republicans were elected for a reason. This is one of them.  This is a big test for Mitch McConnell and the Republicans. Stand strong.  We'll watch closely. Senator, thank you for being with us.