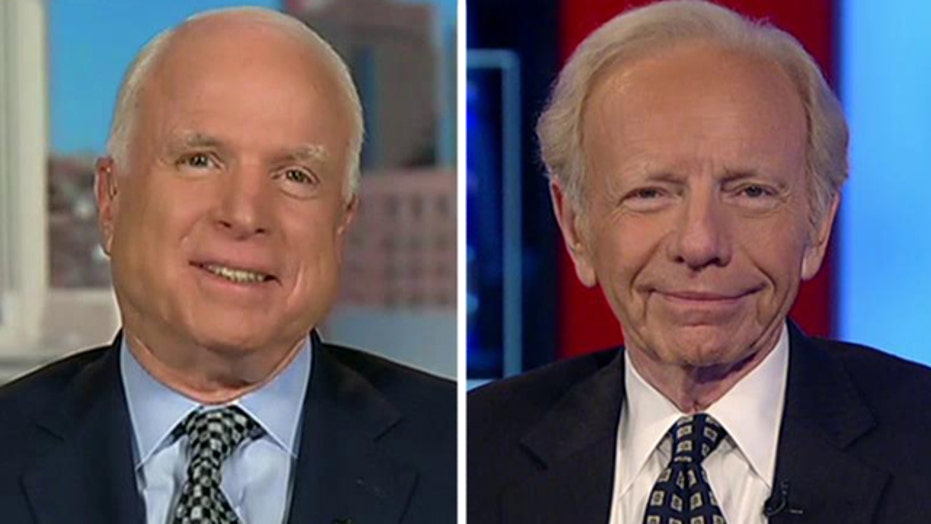 This is a rush transcript from "Hannity," September 30, 2014. This copy may not be in its final form and may be updated.

SEAN HANNITY, HOST: The president's recent refusal to take any blame for underestimating the ISIS threat is just one example of him leading from behind. And when it comes to being a leader -- well, our commander-in-chief could learn a thing or two from Israeli Prime Minister Benjamin Netanyahu. Watch this.

UNIDENTIFIED MALE: Are you saying this is not really a war?

PRESIDENT BARACK OBAMA: Well, what I'm saying is that we are assisting Iraq in a very real battle.

ISRAELI PRIME MINISTER BENJAMIN NETANYAHU: ISIS must be defeated.  But to defeat ISIS and leave Iran as a threshold nuclear power is to win the battle and lose the war!

OBAMA: Rather than play whac-a-mole and send U.S. troops wherever this occurs, we have to build strong partnerships.

NETANYAHU: When militant Islam succeeds anywhere, it's emboldened everywhere. When it suffers a blow in one place, it's set back in every place.

OBAMA: If we make the mistake of simply sending U.S. troops back in...

We can maintain peace for a while.

NETANYAHU: Once Iran produces atomic bombs, all the charms and all the smiles will suddenly disappear. And it's then that the ayatollahs will show their true face and unleash their aggressive fanaticism on the entire world.

HANNITY: Bibi, Winston Churchill. Obama, Neville Chamberlain.  Joining me now, Arizona Senator John McCain, as well as former Connecticut Senator Joe Lieberman, who is now an advisory board member for the Counterextremism Project. Thank you both -- by the way, now that I have you both here, truth be told in 2008, Senator McCain, did you consider this man as a potential VP choice?

SEN. JOHN MCCAIN, R-ARIZ.: Oh, absolutely. Absolutely. And I would -- listen, I'm grateful for Sarah Palin, but I'm also grateful for Joe Lieberman and the wonderful work he has done for this country, and I consider him one of the finest men I've ever known.

HANNITY: Listen, I tried to say once I was his friend. I nearly got him defeated in Connecticut for saying that, so I don't know...

JOE LIEBERMAN, I-FORMER CONN. SENATOR: Unlike you, Sean, in Connecticut, when John says he's my friend, it used to help me.

LIEBERMAN: This is our first time on television together.

HANNITY: Is that true?

LIEBERMAN: John and me. We talk to each other all the time, first time on television together...

LIEBERMAN: ... so this is -- I don't know if it's (INAUDIBLE) like Simon and Garfunkel getting together again...

HANNITY: Let me -- let me ask you, Senator Lieberman -- no shock and awe, no boots on the ground, we're not at war with ISIS, the Islamic State is not Islamic. He was warned for a year about ISIS, misses his briefings for -- you know, 60-some-odd percent of the time. What do you make of this?

LIEBERMAN: Well, you know, the statements you're just citing, Sean, to me are really disappointing because they come after a really pretty good strong speech by President Obama at the United Nations, in which he took some positions that he had not taken for the previous years, recognizing the broader threat of militant Islam, violent Islam coming from the Muslim community, finally doing what John and I had been asking him to do for three years, which is to give weapons to the Syrian opposition to fight a butcher Assad in Damascus, and talking about cutting off funding for the terrorist groups and developing social media to try to convince young Muslims not join them, which is what this counter-extremism Project that I'm involved with is going to do now.

So when he goes on the air and does a "60 Minutes" interview and some of the others and says some of the things you cite, it undercuts that. And we are at war. He himself said it's -- this is going to last beyond...

HANNITY: Why can't he say it?

LIEBERMAN: I don't know. Maybe he's concerned legalistically that if he says we're in a war, then the Congress has to authorize whatever he does. But you got to tell it as it is. And as it is...

HANNITY: He repeatedly -- he misses 60 percent of his intelligence briefings, plays more golf than he sits in these meetings. He was warned for over a year about ISIS, warned about the consequences of leaving Iraq.  He did nothing as city after city fell. We lost 4,000 Americans, Senator McCain. Those families have to be asking why tonight!

MCCAIN: And Joe Lieberman and I were in Fallujah and Ramadi, where hundreds of Americans were killed and wounded. The black flags of ISIS fly over those cities today. It's hard to talk to the parents of those families and those brave veterans that literally put everything on the line.

But let me just say it's a bigger problem here with this president.  This -- this -- the dog ate my homework routine is getting a little tiresome. It started for six years with BIOB, blame it on Bush. And now the JV has turned into more than -- has been turned into Super Bowl contestants.

He does not -- fails to realize that it is his policies and decisions that led us where we are. When Ryan Crocker yesterday -- most respected diplomat that I know of -- said, Yes, we could have left a stabilizing force behind -- these brave Americans had stabilized the situation in Iraq.  ISIS was nothing when the president of the United States announced that we were going to withdraw everybody from Iraq.

And by the way, if he does what he says he's going to in Afghanistan, you'll see the same movie. That is just disgraceful!

HANNITY: Let me ask you both this question because I think both of you recognize -- Senator Lieberman, I know you recognize that ISIS is Islamic.

HANNITY: I ask you -- I want you -- because you have far more credibility with the White House than I do -- to advise this president.  Give him your best counsel.

LIEBERMAN: Well, I don't know why these games, really. I spent a lot of time studying what happened at Ft. Hood with Major Hasan. I mean, the man stood up and shouted Allahu akbar, and then he killed 13 Americans and wounded a bunch of others. Do you know of any time in recent memory when there's been a murder in the United States and the murderer has cut off the head of the victim?

LIEBERMAN: This has to be...

HANNITY: Three days after the leader of ISIS called for lone wolves to do it.

LIEBERMAN: Yes. And it's not just coincidental, as we know. This is an individual who obviously had turned toward violent Islam by his own social media.

HANNITY: Yes. So what's the answer?

LIEBERMAN: The answer is we have to keep shouting out.

HANNITY: Go to war. If we're going to go to war, should we win it?

LIEBERMAN: Yes, that's the only way to go to war. And that's why I say I'm so disappointed because the president, to me, in the address to the nation and the speech at the U.N. seemed to be turning in the right direction. Now it seems to be, you know, two steps forward, one step back, or maybe one step forward, two steps backwards.

HANNITY: Senator McCain, I supported the war in Iraq, and I believe we won that war. But I believe we didn't keep the intelligence and the training troops on the ground for the Iraqi forces. I cannot in good conscience ever support a war if we don't plan to win it and maintain the victory. What's your advice to the president?

MCCAIN: My advice is -- and I agree with Ralph Peters. These are minimal strikes, minimal action. We're asking 5,000 young Syrians to go back into the fight, and yet not protect them against Bashar Assad's barrel bombs. You know, the -- we warned ISIS days ahead of time, so the buildings were empty. And I promise you, we will have to have boots on the ground. That does not mean units, but it means forward air controllers, special forces and others, even in Syria, if we're going to prevail over ISIS.

And I -- the way that this -- these air strikes are being conducted reminds me of a war a long time ago and far away, my friend, called the Vietnam war, when (ph) gradual escalation, which caused us to lose it.

HANNITY: All right, guys, good to see you both.