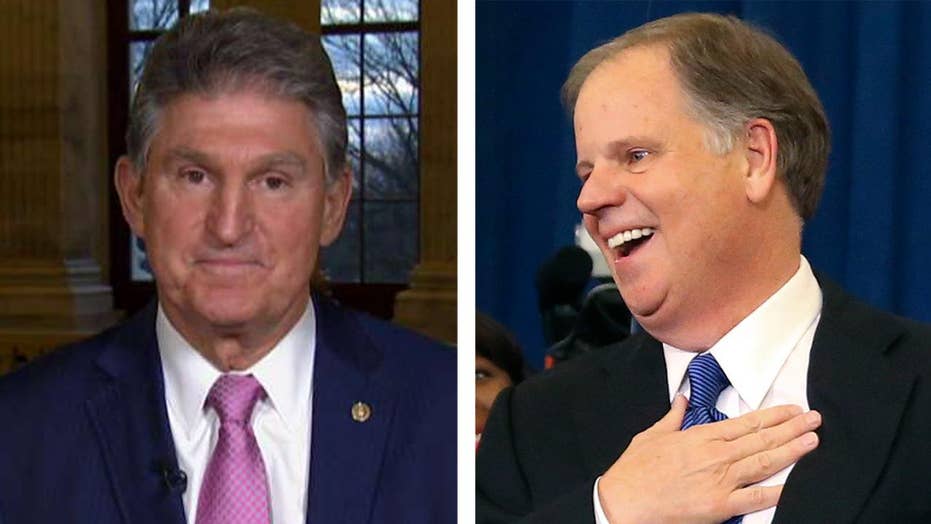 Sen. Manchin: Jones and I belong to the 'radical middle'

This is a rush transcript from "Your World," December 13, 2017. This copy may not be in its final form and may be updated.

NEIL CAVUTO, "YOUR WOLRD" HOST: A Democrat in a conservative state that Donald Trump won big. Ring a bell?

CAVUTO: Any advice for your soon-to-be...

MANCHIN: Neil, always good to be with you.

Your soon-to-be colleague Doug Jones, how do you advise him?

MANCHIN: And that's a tough -- a tough space to handle right now.

If it something that doesn't make sense and you can't explain it, then don't be for it. Don't worry about the Washington Democrats. You be that-- you stay right where you came from. He knows where he's from. I think he's going to be great. I think he understands, he's grounded, and he is going to come here with a lot of common sense and help a lot of Alabamans.

And I have got a lot of friends down there, so I know he will take care of them.

CAVUTO: Moderates are sort of like a rare, a rare beast.

CAVUTO: And, sometimes, you're treated beastly as a result by both parties.

MANCHIN: Well, basically, any -- when I first got here, someone first came to me -- and I won't name names, but they said, it is going to be a party- line vote. I never heard that word, party-line.

I came from governor of the state of West Virginia. I brought everybody together. I never just said, oh, it's got to be just only Democrats or it's going to be only Republicans, you don't like the Republicans because I'm a Democrat.

They were all my friends. I wanted all of them. I needed them all to help West Virginia. So, I heard that first term. And I said, what is it about? And they said, well, we have got to be all together. And I said, OK, let me see it.

I looked at it, Neil, and I read what they wanted me to vote for. I said, on my best day, I couldn't vote for this crap or explain this crap or sell this crap in West Virginia.

MANCHIN: And I never had any more problems since then. That's what Doug has got to do.

MANCHIN: And they will understand it's all about Alabama, and it's not about Washington.

CAVUTO: In Washington right now, the talk is, you are under enormous pressure, as you seek reelection, to do something that would be popular among your constituents. And that is to vote for a tax cut package that would probably grease the skids for your reelection.

CAVUTO: What do you say that?

MANCHIN: And I understand that.

Can't why just try to follow in those footsteps and say, OK? And in his '84 inauguration speech, he said, we're going to do major tax overhaul. He had Jim Baker, his treasury secretary, write up -- they had three volumes of ways to make the changes.

They worked over a year or more. And then it wasn't until 1986 that it was passed. He had over 73 votes, I think, in the Senate and over 290 votes in the House, with Tip O'Neill working with him, leading the charge.

MANCHIN: I think, in the long run, it will, Neil, from this standpoint.

They said -- when I met with the president and had dinner with him one night, and he was saying: "Joe, this is not going to be a tax cut for the wealthy, the super wealthy, like me. It's going to be for the working people that really kind of got left behind."

So, something has happened. It's not the bill -- not the way the president, I think, in his own -- what he wanted or what he thought it might be. But I guess the establishment says, this is what we have got to do and how we have got to do it.

And they want to do it without any -- they're determined not to have one Democrat. I'm an easy pickup. Just give me a little bit. I said, do you have to drop all the way down to 20 percent? Do we have to, when we have the greatest economy?

CAVUTO: Well, they didn't. They have made it 21 percent.

MANCHIN: I will give you one. Go to 25. And stay there three or five years. See if the GDP takes off, the way we all want it to. See if the debt starts going downward.

CAVUTO: No, you make a very valid point.

The rap against -- and I know you have been very concerned about the debt, but you're consistent and far from hypocritical on this issue, but, but...

MANCHIN: Well, the other thing is, Neil...

CAVUTO: But, Senator, I think you would agree with me that, for some of your colleagues to be bemoaning debts and deficits piling up, it's sort of like me lecturing people on dietary advice.

MANCHIN: That's a little bit -- that's a bit of hypocrisy.

CAVUTO: You wouldn't go there, right?

MANCHIN: That's a little bit of hypocrisy. It's on both sides.

MANCHIN: So, I'm not here trashing anybody.

But they had -- I swear, you would have had 15 to 20 Democrats that really wanted to work, and really in good faith, toward changing, making a competitive corporate tax, making sure that the individual tax was permanent, making sure we closed down outsourcing, did some things good, kept some of the inclusions that we had in there that gave people relief.

But we didn't have to throw caution to the wind as far as on what we were doing to the next generation. And the only thing I said, you know, why do you have to use budget reconciliation? Why don't you work through regular order? Then, if we don't work with you, if I can't get more Democrats to make common sense and vote with you, then go after us.

MANCHIN: We had no chance at all, Neil.

CAVUTO: We will watch what happens.

MANCHIN: You too, Neil. Merry Christmas.

CAVUTO: To you as well.