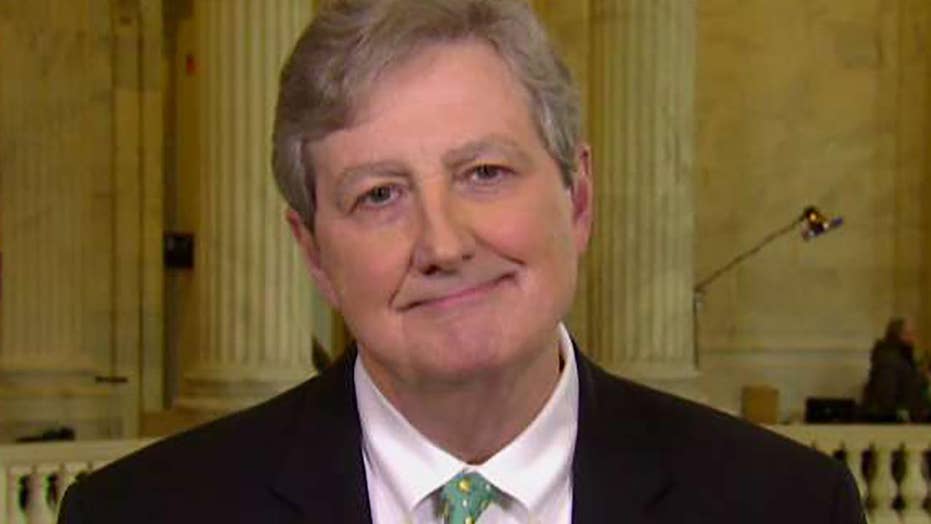 Sen. Kennedy: I will be glad when Mueller completes probe

This is a rush transcript from "Your World," April 9, 2018. This copy may not be in its final form and may be updated.

NEIL CAVUTO, HOST: And all we know, again following up on what John Roberts has been saying, is there was enough interest in this payment and other related records around it that the FBI raided Michael Cohen`s offices, seizing records related to this and other payments.

We're told other payments, according to The New York Times.

We are going to explore that with the judge, Andrew Napolitano, in a second.

First to Louisiana Republican Senator John Kennedy, what he makes of all of this.

Senator, thank you for your patience.

Well, it's all speculation. If we look at the facts, we know that the New York Times reported that the FBI has raided Mr. Cohen's office. Now, presumably, it's about the $130,000 payment to Mrs. Daniels.

Since we're just speculating, and nobody knows, one point of view could be that someone has someone alleged the payment by Mr. Cohen to Mrs. Daniels was somehow a violation of the election laws.

But if we're going to be fair, it's equally plausible that somebody might have alleged that perhaps somebody was trying to extort the president through his lawyer. I mean, both of those are equally plausible. We don't know.

CAVUTO: But why would the FBI then seize records to that degree, to try to ferret out an extortion?

I will say this. I will be glad when Mr. Mueller completes his investigation. I want him to be thorough, and I want him to take his time.

But I do hope he completes it soon and reports to the American people. I trust the American people to figure this out. But all we know right now is there's been a raid. And it could be about the $130,000 payment. It may be that the payer violated the law, but it may be that someone -- I`m not alleging this, but someone was trying to extort somebody.

CAVUTO: That, we don't know, to your point.

But I am wondering, Senator, if this hints of an investigation that goes far afield from its original intent? Now, it wouldn't be the first such investigation to do that. I think the Ken Starr investigation started out with Whitewater and land deals and ended with an intern in a blue dress. So, I know how these things go.

But do you have a feeling this thing is spreading wider, further than you thought?

KENNEDY: It looks like to me it's spreading wider.

Having said that, if the special counsel discovers something that he believes is improper, I think he has a legal, if not a moral obligation to pursue it.

Having said that, though, we're well over a year into this, and I think the American people are anxious to have it wrapped up. I know I am. Have the facts reported. Let the chips fall where they may. If somebody did something wrong, they should be held accountable. But I don`t think it`s helpful to the country for this to go on forever.

CAVUTO: You know, sir, we were told last week at this time, close to this time, that the president was, you know, a subject in this investigation, but not necessarily a criminal one. I'm paraphrasing here.

Do you think that was pre all of this, that now that has changed, that things might have gotten a little bit more heated than was originally thought to be the case just a few days ago?

KENNEDY: And one of the frustrating things about this entire exercise is the fact that everybody is leaking, including apparently -- well, on both sides -- are leaking.

And we're supposed to draw conclusions based on the leaks. And the truth of the matter is that nobody, except Mr. Mueller and those close to him, know. And everything else is pure speculation.

CAVUTO: You're absolutely right about that.

KENNEDY: And it makes for, I guess, interesting watercooler talk. But I try not to get all lubed up one way or the other, because we just don`t know.

CAVUTO: No, we do not, sir. And I appreciate your patience with all this other breaking news.

And I do want to talk to you about many other things tomorrow, if I can get you back, on the Zuckerberg testimony.