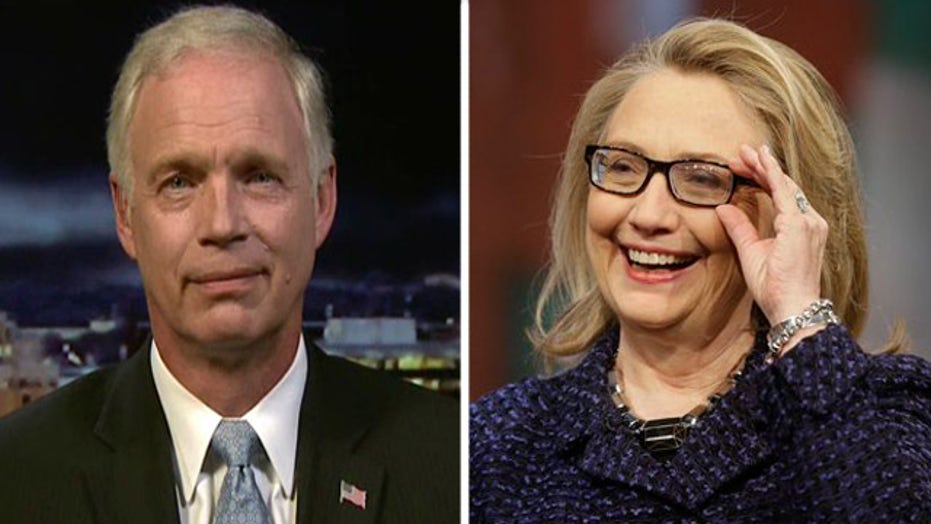 This is a rush transcript from "The Kelly File," May 30, 2014. This copy may not be in its final form and may be updated.

MEGYN KELLY, HOST: In the meantime, we detailed last night how Hillary Clinton's political allies were meeting in Washington this morning reportedly to map a plan to protect her from the new select committee that is investigating Benghazi. When the meeting broke, some of the folks told reporters the issue of Benghazi, it never came up but we kept digging and we learned that was not true. They were misleading the press outside of the event. Remember last year when the Senate was pressing then Secretary of State Hillary Clinton about what heal really happened with Benghazi, things got very heated.

SEN. RON JOHNSON, R - WI: Do you disagree with me that a simple phone call to those evacuees to determine what happened would have ascertained immediately that there was no protest? I mean, that was a piece of information that could have been easily, easily obtained.

JOHNSON: Within hours, if not days.

CLINTON: Senator, you know, when you're in these positions, the last thing you want to do is interfere with any other process --

CLINTON: Number two. Well, no, it's the fact.

CLINTON: And with all due respect, the fact is we had four dead Americans --

CLINTON: Was it because of a protest or was it because of guys out for a walk one night who decided they would go kill some Americans? What difference at this point does it make? It is our job to figure out what happened and do everything we can to prevent it from ever happening again, Senator.

KELLY: Joining us now is Republican Senator Ron Johnson, the man doing that questioning that led to that now infamous sound bite from Mrs. Clinton who many believe would very much like to be the next President of the United States. Senator, good of you to be here tonight. What were you driving at in that exchange?

JOHNSON: Well, Megyn -- well, let's face it. The administration did mislead the American public for a couple weeks. And I was just asking a simple question, why didn't you call the survivors? That's certainly what I would have done. First of all, just to find out how they are doing, can I do anything for the family, but then to find out exactly what happened and, you know, I think the reason she got so testy is it's a pretty uncomfortable question and I think she felt culpable. There is no doubt about the fact that security request for increased security, not only those requests went unanswered, they actually ramped down security and so, from my standpoint, Megyn, that was a clear dereliction of duty.

KELLY: She's still trying to say that this may have been about a video. I mean, she's still now saying that even though we know that's not what it was about. And in fact, now we've learned that it was the administration, it was the White House that pressed to have that narrative put out there to the American public so that we would believe this is about a video and not a failure of policy because we saw that in the Ben Rhodes e-mail that was circulated prior to Susan Rice going on those talk shows. When Tommy Vietor, a National Security spokesman was asked about it by our own Bret Baier, about whether he was the guy, he was the White House guy at the time was the one who changed those talking points, that the White House had previously said it didn't have his hands on at all, here is what he said to Bret Baier. Listen.

BRET BAIER, FOX NEWS ANCHOR: Did you also change attacks to demonstrations in the talking points?

VITTER: Dude, this was like two years ago. We're --

BAIER: Dude, it is the thing that everybody is talking about.

KELLY: So he's pressing him on changing the talking points, but the thing is senator, her defenders say what is your theory, that she completely made up the business about the video because she wanted to protect her own political neck.

JOHNSON: Well, you know, Megyn, one thing people haven't paid much attention to is, we know very little about what President Obama or his Secretary Clinton did that night but we know they spoke about 10:00 and then at 10:08 the State Department issued a press release that started talking about inflammatory material on the Internet, basically the video. That was a couple of minutes after the president and secretary of state talked. Now, you know, what did they talk about? Rather than talking about what they need to do to send whatever military assets to help those folks in Benghazi or were they really talking about how can we cover-up our dereliction of duty.

KELLY: Do you think that that exchange you had with Hillary Clinton is going to become an important moment in her presidential aspirations?

JOHNSON: I think it already has been. I'm sure she regrets it, but, you know, again, what you really have to concentrate on is, you know, what are they trying to cover-up and it really is, and the biggest outrage is what they didn't do prior to the attacks. You know, the security that was not provided. The security that was actually ramped down. And that's what the American people need to concentrate on. And Megyn, the other thing I point out is put yourself in the position of secretary of state welcoming home those bodies of those four dead Americans.

KELLY: And he was of course, later arrested. Senator, thanks for being here.

JOHNSON: Have a great night.