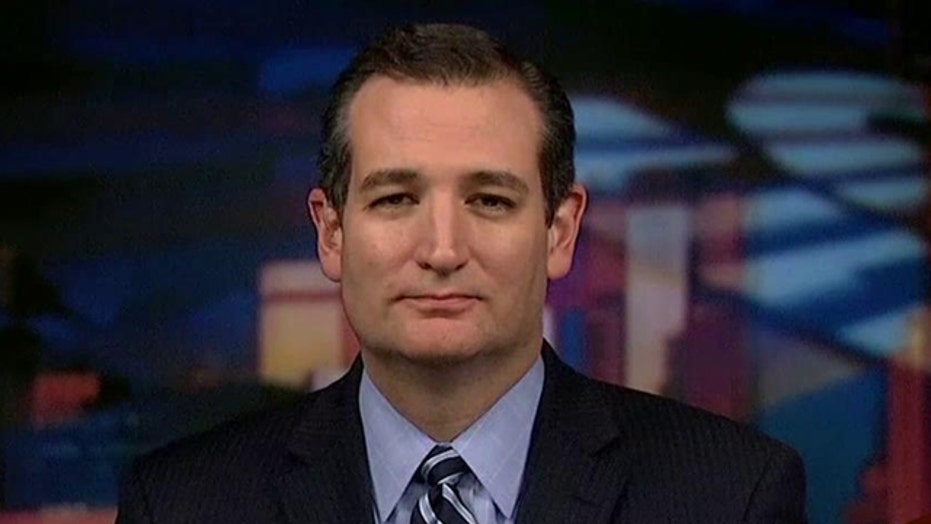 This is a rush transcript from "Hannity," October 16, 2014. This copy may not be in its final form and may be updated.

SEAN HANNITY, HOST: This is a Fox News Alert. Many Americans are demanding that the U.S. immediately institute a travel ban for passengers coming from these Ebola-ravaged countries. But Dr. Tom Frieden, who's the director of the CDC, who previously said a travel ban for infected areas would only make things worse -- well, today, he tried to explain his reasoning to a House panel. Watch this.

DR. THOMAS FRIEDEN, CDC DIRECTOR: If we try to eliminate travel, the possibility that some will travel over land, will come from other places, and we don't know that they're coming in will mean that we won't be able to do multiple things.

HANNITY: All right, here to explain why he thinks the House and Senate should, in fact, reconvene in order to enact a travel ban to stop the spread of the deadly Ebola virus, is the senator from the great state of Texas. I'll be with him Saturday night in Dallas. My staff is a little nervous that I'm going, considering all that's happening. Senator Ted Cruz, how are you, Senator?

SEN. TED CRUZ , R-TEXAS: Sean, it's always great to be with you. We look forward to welcoming you back down in Texas.

HANNITY: You want Congress to reconvene. I found a letter that you wrote 14 days ago to the FAA saying that these flights should be banned from these Ebola-ravaged countries. And I read you didn't get a response yet?

And the time has come to ban commercial air travel from countries that have an active Ebola outbreak. The arguments the administration is giving against it don't make any sense. And the top priority, Sean, should be to protect the health and safety of American citizens.

HANNITY: I don't think they could have screwed this up any more, to be honest, Senator. It's that bad. If you go back to the comments two weeks ago while you were writing that letter calling for a ban, you were ahead of the curve and you were right. If in fact that would have been put in place I think we'd be a lot safer today. But the CDC head was saying don't worry about it. All you need is a private room with a private bathroom. You don't need anything else beyond that. How could he be so wrong and be the head of the CDC?

CRUZ: Well, the arguments that the Obama administration is giving, they don't make any sense. So for example one argument they're giving is they say they've implemented screenings in five airports. Now, that's a positive step. But the problem is screenings only work if someone is demonstrating symptoms. Since Ebola has up to a 21-day incubation period, if someone is not demonstrating symptoms, the screenings are ineffective.

You know, Mr. Duncan, who flew from Liberia and was able to fly to the United States to DFW airport here in Dallas, from what we know when he came over he didn't have a fever at the time. He wasn't demonstrating symptoms, which means he would have walked right through the screening.

What the administration is doing isn't enough. And what's amazing, Sean, this shouldn't be a partisan issue. This is a simple matter of common sense. There is an outbreak in western Africa.  Over 8,000 people have contracted this terrible virus. We should be praying for them. We should be helping them. But the CDC estimates that this virus is not contained, by January it could be 1.4 million.

HANNITY: The World Health Organization is predicting as many as 10,000 a week in coming months. They're also predicting -- they've raised the death rate from 50 percent of those who contract the disease now to 70 percent. This is now a serious disease. The outbreak that the president said was unlikely to come here is now here. Is it as simple as a travel ban in securing our borders? Are borders a big part of this as well?

CRUZ: Borders are a huge part of it. Just last week General John Kelly, the commander of southern command, said if Ebola spreads to Central America and South America, that we could see a mass migration the likes of which we've never seen. And unfortunately this administration is not securing our borders and we don't have the capacity to do so and unless and until President Obama decides he's willing to enforce the laws.

HANNITY: So what can you do as a senator? Can you get your fellow Republicans to join you and demand that you be called back into session?  Can you do that? Can you make that happen?

CRUZ: Well, I am certainly encouraging other Republicans to do so. I have been encouraged that more and more are coming together. As you noted, 14 days ago, two weeks ago, I sent a letter to the FAA asking what precautions they were putting in place and if they were at that time contemplating a ban on commercial air travel. They simply haven't responded.

But I've been encouraged. In the last two weeks you've seen more and more elected leaders, both Republicans and Democrats, arriving at this commonsense decision, a basic principle of prudence, let's protect Americans. That ought to bring everyone together.

HANNITY: Senator, I get to see you Saturday night in Dallas. I would invite people to come but the event is sold out. And we look forward to seeing you. I look forward to listening to you give your speech, and I'll be giving my own. Thank you, sir.