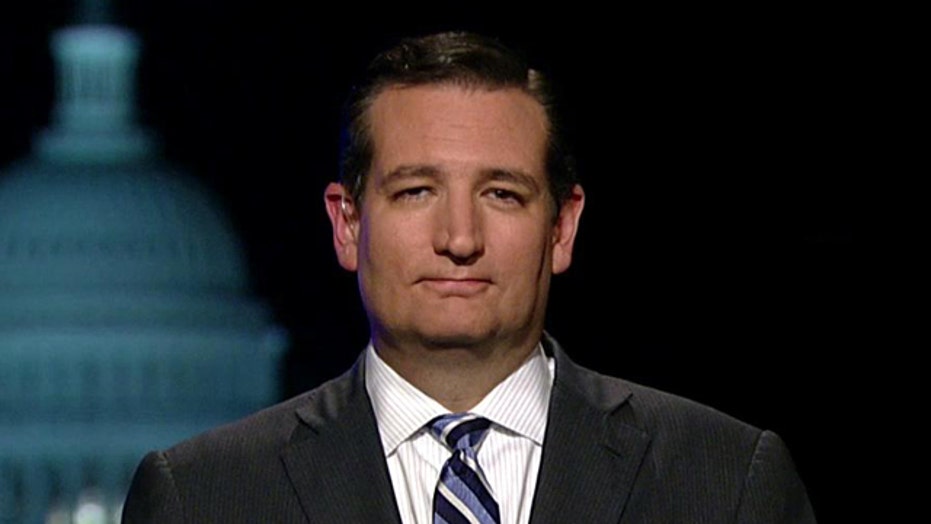 Cruz sounds off on Obama's approach to immigration reform

This is a rush transcript from "The Kelly File," July 9, 2014. This copy may not be in its final form and may be updated.

MEGYN KELLY, HOST: Breaking tonight, President Obama just wrapping up a fundraiser in Dallas, Texas. Air Force One is fired up on the tarmac right now, waiting to take the president to his next stop in Austin for another fundraiser.

President Obama attending the DNC event at the million dollar home of Dallas Attorney Marc Stanley. Tickets for the barbecue at the Stanley Estate starting at $10,000. Wow, those must be some really good ribs. And going up to more than $32,000 per couple.

This comes as our southern border is in the midst of an unprecedented crisis, something the White House has described as an emergency, but apparently not big enough for the president to actually go there when he is in Austin and Dallas. As you may have heard, thousands of illegal immigrants are being rounded up and shipped off to various parts of the country with little more than a request that they report to ICE within 15 days. He's about 500 miles from the border right now, but the president said tonight he doesn't need to actually go there. What he needs to see happen is for Congress to take action.

If the Texas delegation is prepared to move, this thing could get done next week.

Senator, good to see you tonight. So, he basically says what -- he sent you guys a supplemental bill. He wants an additional $3 billion plus. And if the Congress would just sign off on that, he could get these migrants, as he refers to these folks, processed. He could get justice. He could get the kids, you know, shipped off to where they belong and to safe places. And it's really your burden to step up to the plate.

SEN. TED CRUZ, R-TEXAS: You know, Megyn, it's great to be with you. The cynicism of President Obama seems to know no bounds. He is in Texas tonight. He's going to two major fundraisers where he wants to be with wealthy Democratic donors, but apparently, he doesn't have time to actually go and see the border, he doesn't have time to see the children who are suffering because of his failed policies. Earlier, he was playing pool. Apparently playing a game of pool is a higher priority for this president than it would be to go and see the humanitarian crisis he's created.

The president's right in one regard. He's described what is happening on the border as a humanitarian crisis, and it is, but it's a crisis of the president's own creation. We are seeing tens of thousands of little boys and little girls coming across in the custody of violent, hardened drug dealers because of President Obama's lawlessness, and that's what needs to be corrected. And he has no intention of correcting it or changing what he's doing.

KELLY: You know, the president is now referring to it as a humanitarian situation after the White House repeatedly said it's a crisis, it's a crisis, it's an emergency, it's an emergency. Now suddenly people are paying attention, it's a situation. And he goes to these $10,000 a head fundraisers at these fancy dinners where couples are paying $32,000 a plate, you know, for two plates, and you got these kids sitting there eating, according to the reports, literally like frozen burritos and crackers. It's just the imagery of what's happening and the president is being checked out is potentially damaging.

OBAMA: There's nothing that is taking place down there that I am not intimately aware of and briefed on. This isn't theater. This is a problem. I'm not interested in photo-ops.

You know, it's worth just looking at the data to understand just how bad of a problem President Obama has created. Three years ago, in 2011, there were roughly 6,000 unaccompanied children that were apprehended trying to cross illegally into this country. Then in 2012, President Obama illegally granted amnesty to some 800,000 people here illegally who had entered as kids. He did that right before the 2012 election because I presumably he thought it would benefit him in the election.

This year, it is estimated there will be 90,000 unaccompanied children trying to come in this country. That's up from just 6,000 three years ago. Next year, they're estimated 145,000.

Megyn, the thing to really understand is these kids, they're not being brought over by a well-meaning social worker. These are violent criminals. These children are being subjected to physical abuse, to sexual abuse. It is a humanitarian crisis, and it is because the president is refusing to enforce the law.

KELLY: Here's the question. Why wouldn't he go? Because our own Chris Stirewalt wrote an interesting opinion piece saying the reason he's not inclined to visit the border, which would be so easy for him, right?

KELLY: I mean, he's down there. Is that he does not want further responsibility for a crisis his administration foresaw and helped create. And do you think that that's the reason?

CRUZ: Yes, and it's part and parcel. This is an absentee president. This is a president who we've got the lower labor force participation since 1978, and he goes and plays golf hundreds of times with his buddies. He is not focused on the people who are hurting, who are paying the cost for his failed policies. Across the country, you've got young people, you have Hispanics, you have African-Americans, you have single moms. In this case, you have tens of thousands of immigrant children who are being brutalized and victimized because of his policies.

KELLY: And yet, when he was asked about it tonight, he pointed the finger of blame squarely at Congress. And here's some of that for the viewers. Listen.

OBAMA: It would be useful for my Republican friends to rediscover the concept of negotiation and compromise.

KELLY: And he's talking about, among other things, the immigration reform push that the Senate passed but the House did not.

You know, Megyn, a couple weeks ago we had a hearing in the Senate Judiciary Committee, and a number of senators received a confidential report from a whistleblower on the Border Patrol where they had interviewed over 200 people here illegally and they asked them, many of them were children, they asked them why are you coming? 95 percent said we're coming because we believe we'll get amnesty. We believe we'll get a permisso (ph) we'll be allowed to go free. These are the consequences when you have a president that illegally grants amnesty and when you have a president that promises more amnesty. What it produces -- this is the face of amnesty. This is what it looks like. Tens of thousands of children being victimized. This is why amnesty doesn't work. And the president won't take responsibility for it, instead he just wants to shift plane, which sadly is the pattern he's taken on issue after issue after issue in Washington.

KELLY: Senator Ted Cruz, thanks for being here tonight, sir.

CRUZ: It's always a pleasure.