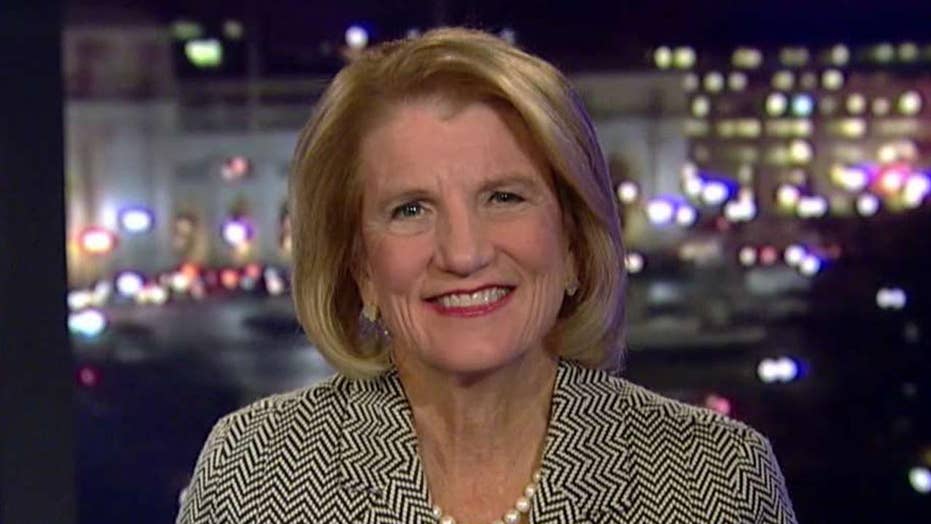 This is a rush transcript from "Special Report with Bret Baier," November 28, 2019. This copy may not be in its final form and may be updated.

MIKE EMANUEL, FOX NEWS: Congressional lawmakers are back home for the holidays. When they return to Washington next week, impeachment, of course, will be the big issue. Let's get some perspective on that tonight. Bret Baier spoke with West Virginia Republican, Senator Shelley Moore Capito earlier this week:

SEN. SHELLEY MOORE CAPITO, R-W.VA.: Good evening. Nice to be on, thanks.

BAIER: Obviously, the focus in Washington has been and will be likely for the next few weeks at least, impeachment. And it seems like it's heading towards your side of the Capital, with you as a juror. As you sit here tonight, having watched what you've watched, how do you see this?

CAPITO: Well, I see it as the political blunt instrument that it has been through the entire process. When the hearings were private, it was pretty obvious that the Democrats were using this as a way to, you know, be destructive to the Trump -- to President Trump himself. And then when it comes into the public arena over the last several weeks, I think it's shown itself again to be a very divisive, very partisan exercise, and discouraging to the American public. But I will -- it will be coming over, probably, to the Senate. I will be a juror, so, you know, I'm all ears, of course, to try to figure that out once it comes onto my plate.

BAIER: Well, to that point, one of the people making the case is the House Intelligence Committee Chair, Adam Schiff. Here is his closing argument, in essence, at the end of that Committee hearing.

Adam Schiff: When the Founders provided a mechanism in the Constitution for impeachment, they were worried about what might happen if someone unethical took the highest office in the land and used it for their personal gain. And in my view, there is nothing more dangerous than an unethical President who believes they are above the law.

BAIER: Senator, there are some Republicans, Will Hurd from Texas, others, who've said that what the President did and how he did it was inappropriate, but not impeachable.

BAIER: Are you in that camp?

CAPITO: Well, I think probably that his inquiries could be construed as such, but all the evidence that we've seen have been second and third-hand evidence. So, I'll take what Adam Schiff in his own words and the seriousness in which he said it -- I think he protests too much in his closing statement, because he knows that the facts are not there. The president hasn't been able to defend himself. And so, the process has been very much not what our Founders wanted. Not what our rule of law's founded on, but is being used as a divisive partisan exercise and it's not doing justice to our system.

BAIER: The Washington Examiner this week had this an opinion piece saying, “Republicans should admit that Trump's demands on Ukraine were improper, if they are reasonably enough unconvinced that impeachment is the remedy, they should take other actions to steer Trump towards putting true national interests over petty personal interests.” Is censure something that you think the Senate is going to look at?

CAPITO: Well, I think that you can see that drum beat beginning to develop in the House of Representatives. Several members, or at least one member, has mentioned that already. I don't -- I think it's going to be predicated really on what the House brings over to the Senate and what is laid on the Senate's plate in terms of the Articles of Impeachment. You know, I think that if you look at the whole transcript of the phone call, within the few minutes or so that the President, you know, made a statement about investigating corruption and mentioning an opponent, yeah, maybe that wasn't the exact proper way. But the corruption issue is still, I think, a very viable issue in Ukraine and something that we know that if we just fund countries without -- where the money's going to go? Without looking at corruption, we're going to get what we deserve back, which is not satisfaction.

BAIER: If you look at this latest Q Poll out this week, it says, should Trump be removed -- impeached and removed from office. It's upside down now, of 48 “no,” 45 “yes.” That is flipped from October. If you took a poll in West Virginia, where would it be today?

CAPITO: If we took a poll in West Virginia, it would be 65 percent “no impeachment,” and it would be 100 percent “why don't you do the jobs that you're sent to do, which is to fund the government, support the military, and move forward on the really important issues of the day.”

BAIER: And you think that this process so far has already impeded big legislative efforts.

CAPITO: It has. We haven't gotten the National Defense Authorization passed. We haven't passed USMCA, the trade package with our neighbors Mexico and Canada, which we know would be very useful to my state. For the life of me, I can't figure out why that hasn't come forward, except the House of Representatives doesn't want to give the President a win going into the election. We have an election in November. That's what elections are for.

BAIER: Last thing, you were just on a Congressional delegation oversees and you went to Afghanistan.

BAIER: Speaking of the U.S. Military, we've been there on the ground for a long time. Your thoughts about that and the effort to get U.S. troops back home?

CAPITO: Well, I think we have 14,000 troops there right now. It was not lost on me that the areas that we're working on in terms of counterterrorism, whether it's the Taliban, or ISIS, or Al-Qaeda, are exceedingly important that we help the Afghan National Forces and the Afghan National Police and the government of Afghanistan to secure more and more of their territory. Because if we don't, and if we don't work in that “train, advise, assist” capacity that we've been helping them with, they're going to be overtaken again by very violent terrorist groups which then endangers our homeland. It's about what's good for our own security. And while it's been long and hard and costly in a lot of lives and treasure, I think that in the end, keeping to help support them -- the morale of the troops is great, so proud of them when we get to see them.

CAPITO: I understand that. And there are times when I feel that way myself. But, I think we can do a lot more with a lot less and put a lot less lives in danger if we follow the course that we've put forward. We're planning to draw down, I mean, I think that's obvious. And the military leaders along with our NATO partners feel that that's very much in order. As that Afghanistan Government -- we've got to strengthen that. That is a weak point right now, because they've had an election that's under question. And so, I think, as frustrating as it is and difficult as it is for the American public, we've got to look at our Homeland Security and stabilizing that region of the world is part of our own homeland security.

BAIER: Senator Shelley Moore Capito of West Virginia. Senator, thanks for the time.

CAPITO: Thank you. And Happy Thanksgiving.