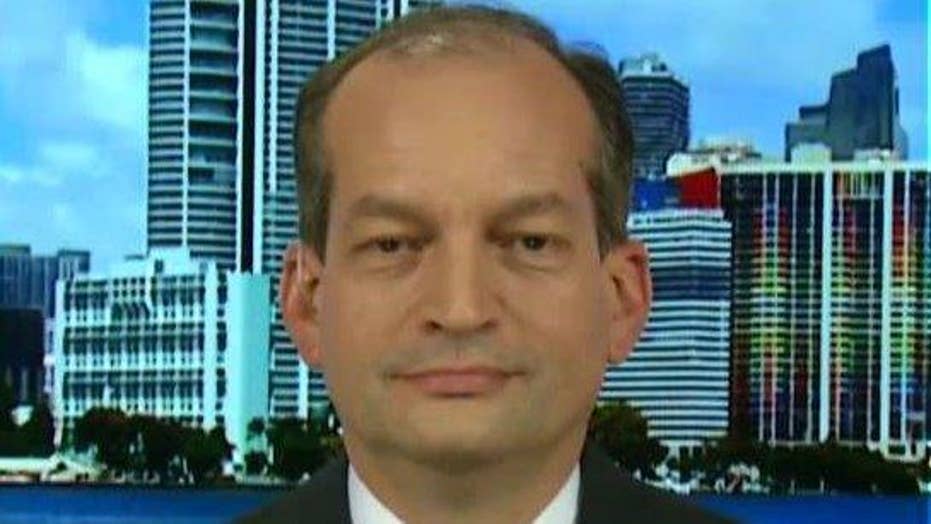 Secretary Acosta: We are focused on helping the Cuban people

This is a rush transcript from "Your World," June 16, 2017. This copy may not be in its final form and may be updated.

Secretary Acosta, welcome. Good to have you here.

ALEXANDER ACOSTA, U.S. SECRETARY OF LABOR: Good afternoon, Trish. How are you?

So, the plus side of this, as people see it, is that we don't want any money going to the Cuban regime, to the military. It should go to the point. But the critics are saying, this doesn't necessarily go far enough, the confusion stemming from the fact that Americans are going to see their travel curtailed to Cuba, yet, simultaneously, there's no curtailing of any American flights that are going to Cuba, of cruise ships that are going to Cuba.

So, walk me through that. How does it work? As an individual, it's harder to go to Cuba, yet you are still going to have a process to get there?

Americans have been able to visit for certain reasons, for educational reasons, for religious reasons, to visit family. The key to today's policy is to give, as we just heard, the power back to the Cuban people.

REGAN: So, let me ask you, Secretary, for example, the arrangements already in existence, if you're say, Starwood Hotels, and you had planned to open a hotel in Havana, you can still do that, but new hotels would be curtailed?

ACOSTA: Well, Starwood Hotels can open a hotel in Havana if it is working directly with the Cuban people.

REGAN: OK, but the -- I guess the concern is -- from some critics right now is that this isn't quite going far enough, that, yes, we hear you, that the money needs to go to the Cuban people and not to the Cuban government or the military, but are you running the risk that you are not allowing certain industries to be there, that this in fact could be somewhat protectionist?

Because if you have already got a deal with Cuba, you're all set. It's going to be the new deals that are harder.

ACOSTA: Well, again, the focus here is on doing business.

And, you know, as to the critics, I will tell you, I was at the announcement today. And it was in Little Havana, and it was electrifying. And people were excited.

The president came to Miami. And he said, I am here to make good on my promise, the promise that I made to the people of Miami when I campaigned here.

And he did just that.

The president made clear he's going to strictly enforce the law. He's going to make sure that the law is followed, a law that hasn't been followed under the prior administration.

ACOSTA: And I'll tell you, the people, the people were not asking for more. The people there were excited that the president made good on his promise.

REGAN: Yes. The people of Cuba do deserve a whole lot more. And it's been very hard and very challenging for them. So, perhaps we all hope this will make a difference.

Before I let you go, let me ask you about the president's apprenticeship program. I know this obviously is important to him. He made a career off of it. It's important to you, as labor secretary. What do you see it accomplishing?

There's 6.9 million individuals unemployed. And our issue is, we have a mismatch between the available jobs and the skilled workers required. And so the apprenticeship program is focused on giving individuals the skills that work force is demanding.

REGAN: Thanks, all right, good stuff.

Secretary Acosta, good to have you here. Thank you very much.