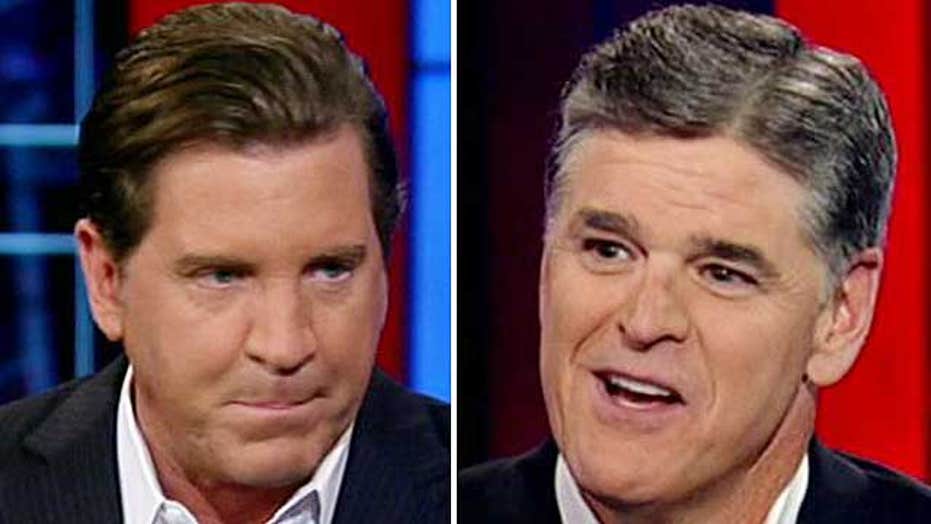 SEAN HANNITY: [George Bush] tried hard when he was president to get [an immigration deal] done himself. What's frustrating to me as a conservative, because I would be open to dealing with 11 million people getting legal status-people that didn't respect our laws, didn't respect our sovereignty-I'd be open to fixing the problem. Right now it's the law of the land; 1986, 96, 2006. We always say secure the border, secure the border first-we never secure the border. You know what it's like? I've watched this back from the Reagan years. They always say we're going to have spending cuts and tax increases. Get the tax increase, you never get the spending cut. You get the amnesty or legalization, you never get the border secure. Government is at such a high level of distrust now; why they didn't listen to conservatives in the beginning is anybody's guess.

WALMART RUNNING FROM "LIVING WAGE" AS DEMOCRATS PUSH FOR IT

KIMBERLY GUILFOYLE: Now other businesses are going to say this is a disincentive, and states are going to say if we pass this draconian law we're actually going to stifle the economy, we're going to lose jobs, and businesses aren't going to come to our state. Why-- to be penalized, to have a business model that doesn't work? Walmart is a perfect example, and unfortunately this is a sacrificial state where they're seeing the actual impact of what's happening. Three stores going to be closed. They're reviewing financial implications for the others. Word to the wise: you'd better think about this twice.

JONATHAN HOENIG: Kimberly hits the nail on the head-these minimum and living wage laws kill jobs, particularly low-skill jobs. They also violate the rights of employers and employees. Wages aren't arbitrary; they're actually based on productive value, and government can force a minimum wage, but it can't guarantee that jobs will actually be available at that wage. Obviously this Walmart DC is the best example. When a company is forced to pay $12 for a job that's only worth $8, the company will go out of business or not produce, and that's what's happening in this case with Walmart in DC.

WAYNE ROGERS: There's a total of 1,800 jobs at stake here; that's not chop liver. And when you think about it, it's an arbitrary thing the minimum wage. Why raise it from $7.25 to $12.50 or $15? Why not raise it to $20? Make it $25. In other words, there is no reason for this. Jobs are competitive, just like everything else. Like pricing is competitive, in a free market jobs are competitive, and if a job can be had for some "X" dollars, that's the competition for the job that determines what the value for the job is. So I don't understand why they pick this. Why not pick any number? It's idiotic. There is no rational for it.

JULIE ROGINSKY: A couple of things about this don't make sense to me. One is DC is probably not the best test case for it, because you could just go across the river down to Virginia or Maryland and shop for less at the same Walmart. The problem for me is these minimum wage laws-which actually I support, and I support a living wage-this actually puts more money back into the economy. You have more money to spend, you're going to spend it at places like Walmart.

GUN SALES SOARING: IS IT BECAUSE AMERICANS ARE AFRAID THEY ARE GOING TO LOSE THEIR GUNS?

KIMBERLY GUILFOYLE: I'm a big advocate of the right to carry your firearms and I like Florida's law in particular because I think it works well there. The Obama administration tends to act like they're anti-gun, but if you look at some of the numbers, people are buying more gins during his administration more than ever. NRA membership is up. So I think people are concerned about it, want to protect their rights.

JULIE ROGINSKY: You've got the NRA going around saying he's going to confiscate your guns, so you've got to buy them now before he confiscates them. It's this completely ridiculous assumption that he's coming for your guns. People are getting scared and they're out to make sure that doesn't happen. You know the NRA needed a foil guy, Barack Obama is that foil guy for them. Shame on them.

JONATHAN HOENIG: The more the government tried to limit gun sales, tried to curtail the Second Amendment. Of course people are not only interested in just buying guns, but interested in protecting their Second Amendment. I don't own a gun, but I joined the NRA for this exact reason. The more you eliminate the ability to own a gun, of course the more people want to buy them. It's one of the reasons you've seen Sturm Ruger's stock up 700 percent since the beginning of the Obama administration. So you can thank him for the huge surge in gun sales.

WAYNE ROGERS: It's going to get worse, Eric. It's another way for the federal government to take away individual liberties. They threaten you with something like that, and then in order to defend yourself you say "yeah, I'm going to go out and buy a gun because they're going to take that right away from me at some point, so I'm going to get as many guns as I can." Of course it drives up sales. I mean it's the stupidest thing in the world for the federal government to take that point of view.

WAYNE ROGERS: (SWHC) GIVES YOU A GREAT "SHOT" AT A GREAT RETURN