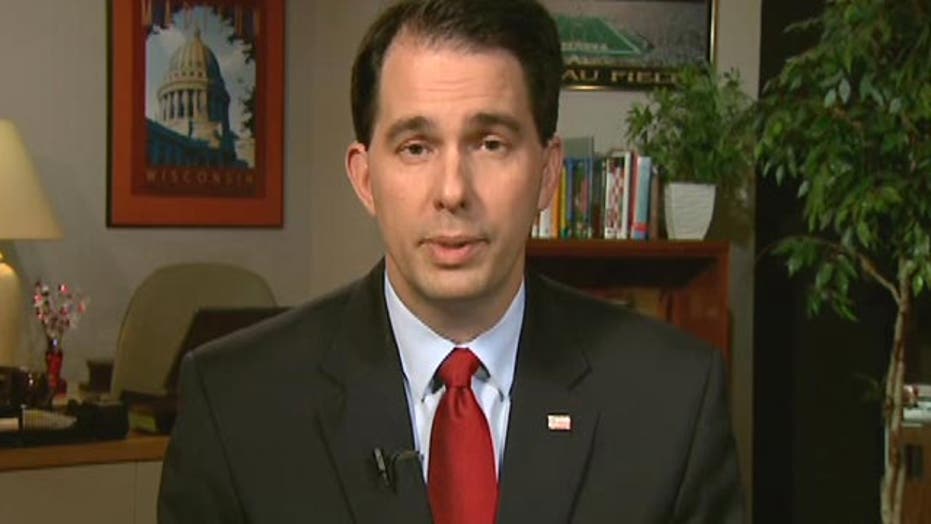 This is a rush transcript from "On the Record," June 25, 2015. This copy may not be in its final form and may be updated.

But the real question, what would he replace it with? Wisconsin Governor Scott Walker joins us. Good evening, sir. And just for starters, how has ObamaCare impacted the state of Wisconsin so far?

SCOTT WALKER, WISCONSIN GOVERNOR: It's a huge negative. It's anything but the Affordable Care Act. We have seen premiums go up for people all across the state of Wisconsin, both individuals and job creators out there. It's one of the biggest frustrations I hear from folks who say hey, this costs me more money. We thought it was supposed to be about being affordable. It's not. It's exactly why we need to have our next president not just be a Republican, but a Republican who can actually fully repeal ObamaCare and replace it with something that puts patients and families, not government, back in charge of our healthcare decisions.

VAN SUSTEREN: So how would you, if you were president -- how do you dismantle something that's become so engrained in the system? And look, people do like the fact that a lot of people that -- you know, before if you had a preexisting disease, you might not able to get insurance, so there are a lot of people who like this.

WALKER: But you know what? That's not exclusive to ObamaCare there are many positive reforms we could have put in place like some of the things you could have mentioned like greater transparency, so that patients actually know about the health care choices they have and the cost that are involved. Much like any of us know about if we pull out our cell phone having transparency real cost there as well. But it doesn't require health care -- ObamaCare to do that.

I might add part of the reason why I'm seriously looking at running for president and hopeful that people who share my beliefs will go to ScottWalker.com and join our efforts is because I look at this and say we just don't need to talk about it. We need someone who can fight and win to repeal ObamaCare and put patients back in charge again.

VAN SUSTEREN: OK. So let's say that you are president and you are fighting to do this. How do you actually dismantle this thing that's been so engrained and what do you envision that to be for the average American?

WALKER: What I learn from four years ago when I first started as governor, you have to push big bold reforms early. And so, I would work with the next Congress to find that position within the first 60 to 100 days. One of the first acts would be to push through a change that would fully repeal ObamaCare. And then, like I said, put a plan back in place that allows patients be in charge of their health care decisions, let the market drive things, gives consumers full information about the choices they have available. And yeah, allows them to do things like buy over state lines and other reforms that are largely positive, but it does not require the bureaucracy of ObamaCare to do this.

In day one, when I first took the oath of office as governor back in 2011, I empowered our attorney general to be one of the states to join in that lawsuit. Unfortunately, Chief Justice Roberts bailed them out the first time. And unfortunately, his court has bailed them out again. It's precisely why we not only need a president who is going to repeal ObamaCare outright but also present and going forward, he has got to make sure judicial appointments appointed on the Supreme Court and other federal positions are ones based on people that will truly uphold the constitution and laws duly enacted under them.

VAN SUSTEREN: You used the term bail out. Are you suggesting that Chief Justice Roberts' decision was not a legal decision but a political decision?

WALKER: Well, from what I read out there, there is an awful lot of consideration left to the impact it. To me, any justice or judicial appointment, much like the ones I make as a governor should be based on men and women of integrity, people who understand the law and most importantly, understand the role of judiciary is to uphold the constitution and laws duly enacted underneath it, and not worry about the consequences. That's up to the executive and legislative branch. The courts should be merely upholding the law under the constitution tonight.

VAN SUSTEREN: Does that mean political? So you are saying -- so you're saying he made a political decision?

VAN SUSTEREN: Care to weigh in on the new Fox News poll, you are in the top five. And on the top five, you are the only one who has not yet announced.

WALKER: In the end, polls only matter on Election Day, so whether I'm ahead or behind, we will stay focused. For us, we hear over the next few weeks as we have been testing the waters phase -- again, we have people all the time coming to ScottWalker.com and joining us, encouraging us to get out there. We're excited about the possibility of helping turn this country around, whether it's ObamaCare, whether it is judiciary, or whether it is even things like Iran deal. We need not just a Republican, we need a Republican president who is actually going to it act and win on these battles and I think we have shown in Wisconsin, we are able to do that time and time again. If we were to run for president, we would do exactly that for America.

VAN SUSTEREN: And do you have an announcement date by the way, either way, whether you are going to announce or not announce? Do you have that date?

WALKER: Well, the week of the 13th is when we will be likely to make our announcement, as to what our intentions are.

VAN SUSTEREN: Governor, thank you. Nice to see you, sir.