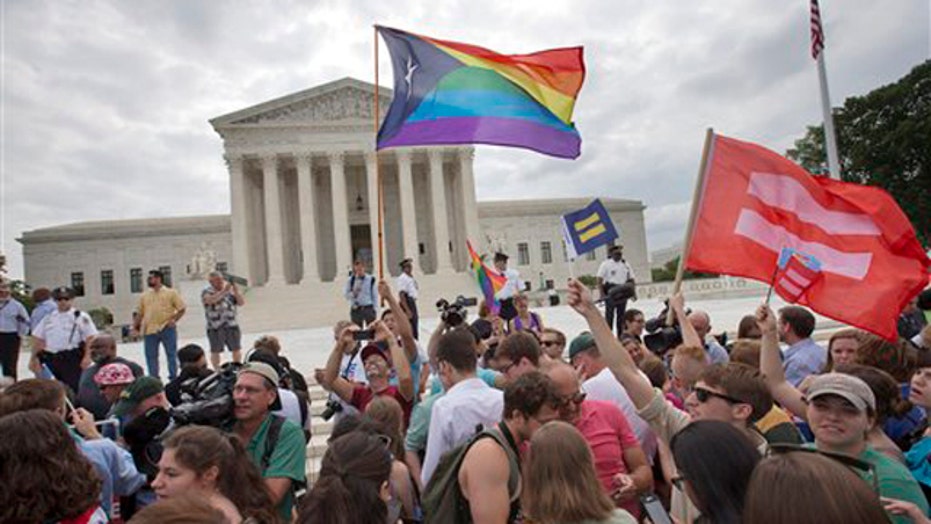 Scales of justice tipping to the left?

Wayne Rogers: This is a return to the Supreme Court of Franklin Roosevelt in the sense that the Constitution is not what is written, the Constitution is whatever the Supreme Court says it is. In an act of expediency, and I think in the case of Roberts, his personality is that of a guy who wants to be liked, he’s desperate to be liked, so he makes these decisions not based on legislative foundation but based on wanting the public to view him as a hero of the public about this. It’s surprising to me that Scalia, who follows the law and interprets the law that the other justices don’t care about the law. They only care about what social justice means to them.

Jonathan Hoenig: The goal Eric, as we talk time and time again, was control. It establishes, as the president talked about, healthcare as a right. The fact that, as Michelle talked about, the deciding vote was Roberts, a Supreme Court justice established by George Bush, I think indicates that people from both the left and the right want to preserve this obligation and make healthcare a right; and of course the obligation to provide it.

Michelle Fields: Absolutely. The Supreme Court is supporting ObamaCare at the expense of the English language. The whole incident is a direct reflection of what is happening in Washington,  where laws are whatever people in Washington want them to be, you no longer need to write legislation and think about the language because they write it, they pass it, and then debate what it is. It’s really disappointing that the Supreme Court is sort of now a politicized group of people. It seems as though they’re more worried about preserving the Obama administration’s signature piece of legislation than actually doing what’s best for the American people and looking at the language of the legislation.

Juan Williams: Well apparently he shocked a lot of conservatives, but I think this case should never have been before the Supreme Court. It comes down to nitpicking Eric, by the conservatives who never liked the law and saw it as big government overreach taking away some personal choices for people who can pick their own insurance or have it provided by employers. Of course, what the law has done is provide more insurance for those that couldn’t afford it before. That was the purpose, and I think Justice Roberts saying that was the intent of the law.

Jessica Tarlov: I think what we’re missing here is that this is the greatest thing to ever happen to the GOP. They can spend an entire election again running against ObamaCare. I mean, what else were they going to talk about? We also saved 6.4 million people from losing their insurance, the CBO report released last week said if we repealed Obamacare, which a majority of Republicans want to, said it would cost $138 billion, 19 million people will be uninsured, the message should be the right to have healthcare in this country.

REPORT: U.S. MAY GIVE IRAN HIGH-TECH REACTORS AS PART OF NUKE DEAL

Wayne Rogers: Well it is madness; let me ask you a question. Why are they building ICBM’s? Why do they have all of those missiles over there? If they aren’t using them, why do they intend to build them? Of course they intend to use them, of course they want to have an atomic presence, and we ignore it because we’re like ‘Oh we can make ignore it because we can make a deal with them.’ Well you can’t make a deal with the devil.

Jonathan Hoenig: I mean if they break the treaty, ‘Oh the sanctions are going to go back again.’ I mean Iran has been the primary sponsor of state terrorism since 1979. Think about how many trillions of dollars and thousands of lives have been lost fighting these Iran sponsored groups. Hezbollah, Islamic jihad, it all comes from Iran. They’re the financial and philosophical creation of Islamic jihad. So, to negotiate with a country who openly calls for the destruction of America and Israel, it legitimizes them and it hurts us.

Juan Williams: I think right now, what we’re trying to do, is develop a partner in peace in the Middle East. I think it’s important that we understand- there’s got to be a bigger vision here than simply more sanctions. The endpoint is not sanctions. The endpoint is to create a peaceful Middle East so we’re not called upon to spend more money, more lives, more debt, more bombs and a greater threat to Israel.

Michelle Fields: I have no confidence in this administration to strike a deal with Republicans on Capitol Hill, and they’re going to go to the negotiating table with Iran? I just don’t have much faith. The problem is that we have a president and a secretary of state with tunnel vision. All they see is Nobel Peace prize, legacy, Nobel Peace Prize. They’re not thinking about how we can get the best deal out of this. Instead, they’re thinking, we need to strike a deal so we have a good legacy. What we should be doing is making sure we have a deal in which inspectors can go to any facility, at anytime, anywhere in Iran and be able to inspect it. We need to have sanctions.

Jessica Tarlov: I don’t think Democrats disagree with that analysis. I mean there’s bipartisan agreement that we need a better deal. For me, the main issue is that we are alienating allies in the region. With what was going on with meeting Netanyahu, meeting Saudi Arabia. I mean we’re losing friends faster than we’re making them and honestly I don’t want a friend in Iran. But we should always be negotiating if it’s possible; we should not take a deal that’s bad for Americans.

Jonathan Hoenig: Look Eric, sometimes I don’t trust these tapes because they pick and choose who they want to talk to, but there’s no question it’s a result of progressive education. It’s anti-American, totalitarian, so who should bother learning the names of officials running for office? Now listen, I bet these kids have had an environment class, a transgender study class, but probably not a basic civics class and that’s wrong.

Juan Williams: Well Eric, you’ve got your next 'Cashin' In' crew, I tell ya. Those are the people who line up, who don’t even know the facts but they line up on one side or the other. That’s how this country has lined up: Paralyzed, polarized mire.

Jessica Tarlov: This is just a great opportunity for politicians to get out there more; to be talking to young people; social media campaigns. I mean this can be fixed. It’s going to be a long slog, but we’ll get there eventually.

Michelle Fields: I think this is what happens when you have Juan’s liberal friends teaching our students in college: you get people that are uneducated. All they know is they should be socialist, they should hate republicans, and they should basically be offended by everything.

Wayne Rogers: I think this speaks to a deeper problem, and that is what we talk about and think about as the “right to vote”. You don’t have the right to vote, you have the responsibility to vote, and the responsibility to educate yourself about what you’re voting for. If you don’t do that, you’re not allowed to vote. Everyone says “you can’t have some kind of an educational test so that people need to pass to vote”—well I think you should.