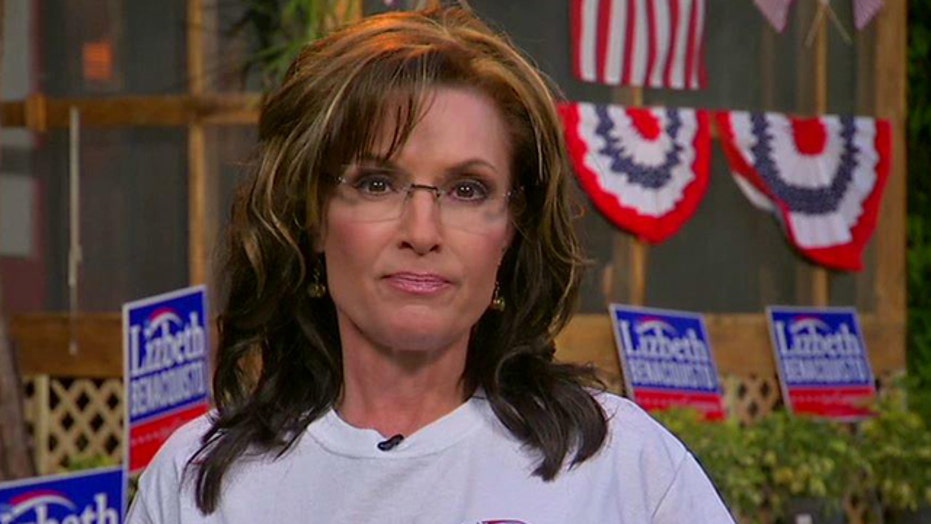 This is a rush transcript from "Hannity," April 3, 2014. This copy may not be in its final form and may be updated.

SARAH PALIN, FORMER ALASKA GOVERNOR: Putin? What are you doing calling me?

FALLON: Well, I heard that back in 2008, you predicted that I would invade Ukraine. Is this true?

FALLON: You betcha, Vlad. I once invaded a country called Ubetchavlad.

FALLON: But seriously, I could have used your predicting powers in office March Madness pool. My bracket's totally busted. How's your bracket doing?

PALIN: Oh, thanks for asking! Bracket's good. You know, he's going to be six this month.

PALIN: Yes. And Bracket just went out with Track and Jacket, and he shot his first bear!

PALIN: Oh, yes, well, see, that's why everyone says you're such a strong leader.

HANNITY: All right, joining us now is former Alaska governor Sarah Palin. That is -- how did that come about?

PALIN: Oh, man, you shouldn't have shown me that! That was flippin' funny. It's the first time that I've seen it having aired. That was funny.

You know, in the neighborhood, just stopping by. Jimmy Fallon -- I have great respect for him. He's a comic genius, and I knew that he would do right by the mission that we're on, and that is telling Putin, you know, get your troops out of Ukraine, and America is going to be strong and we will see peace through strength. So it was fun to get to participate with Jimmy.

HANNITY: You know, I thought about you. It was just announced a couple hours ago that your old buddy David Letterman is retiring. And I was a -- I'm a Leno guy, and I like Jimmy Fallon a lot. What is your reaction to Letterman getting out after he was so vicious to your family?

PALIN: Well, it's cool. You know, out with the old, in with the new. Maybe he'll start a trend when we talk about politics, too, politicians who, you know, have maybe been there in Washington, D.C., a bit too long, allow some new blood in there, some new energy, new ideas to get the country back on the right track, like Lizbeth down here in Florida, district 19, where I am, supporting the candidate who is running for the right reasons.

Maybe Letterman's going to kind of start that trend. Out with the old, in with the new.

HANNITY: Well, any -- a lot of people still want you to run. You don't show any inclination yet that you're interested in running for anything?

PALIN: Not for Senate this go-around, no. But in the meantime, I'm going to be out and about across the country getting, hopefully, the right people at least on the map, perhaps some underdogs, some unknowns, those who are, as I say, running for the right reasons, understanding government's role in our lives.

Government's role is to be as irrelevant in our lives as possible so that the individual can make decisions for themselves, their families, their businesses, and succeed and prosper, making sure that candidates who have that within them and want to allow that and those opportunities across the nation...

PALIN: Get them elected.

HANNITY: You know, I had Paul Ryan on my radio show today. And I brought up your criticism, and I read it to him, about the Ryan budget. He was adamant that if he had a chance to explain his budget to you -- you had supported a previous budget of his -- that he would convince you this is going to balance the budget in 10 years, it's going to reform Medicaid, Medicare. It's going to get rid of, you know, all sorts of spending, green energy, slush funds, and corporate welfare and workfare would...

PALIN: No. No. Well, no. Bless his heart, he probably has more faith in politicians than I do because I've been in this political arena on the local, state and now national level for a long time, and I don't trust to future legislative bodies to adhere to today's legislative body wishing that from 10 years from now, they will cut some budget.

What Paul Ryan's budget does is, ultimately, it increases spending over 10 years $1.116 trillion. That's trillion with a "T," and that stands for trouble, trouble for our nation because it's still -- it still is involving deficit spending, increasing debt, and we can't afford that. Because as I say, future -- future congressmen and women don't have to obey what today's congressmen and women wish for in terms of budget cuts...

HANNITY: No, they're not obligated.

PALIN: No, they're not obligated...

PALIN: ... and that's why I don't have that faith in politicians today.

HANNITY: I wish we'd freeze spending, cut one penny out of every dollar for six years, budget balanced, penny plan.

PALIN: That and we also need a balanced budget amendment.

HANNITY: We need to elect those future officials who will support a budget that would be balanced.

PALIN: I mean, that's common sense. We do that on the state level. Let's do it on the national level.

HANNITY: All right, Governor, good to see you. Looks like you're having fun down in Florida. Appreciate you being with us.

HANNITY: All right, my home away from home.