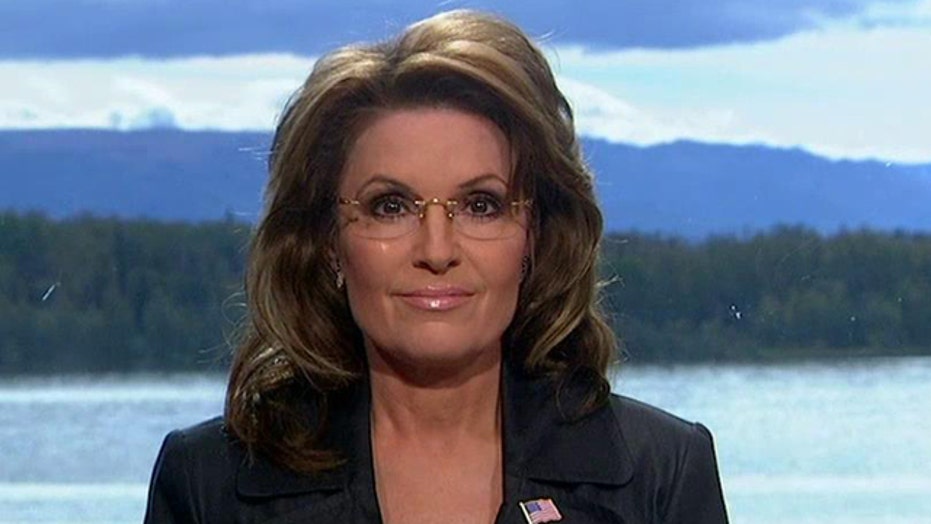 Sarah Palin: 'ISIS is at war with us'

This is a rush transcript from "Hannity," September 11, 2014. This copy may not be in its final form and may be updated.

SEAN HANNITY, HOST: Here with reaction, FOX News contributor, former Alaska governor Sarah Palin. Governor, good to see you. Thanks for being with us.

HANNITY: John Kerry, We're not at war with ISIS, the president, The Islamic State is not Islamic. That came out of the speech last night. We can't get a definition of victory out of the administration. And the president said it was a fantasy just a short time ago to help the Syrian opposition. Well, I guess now he's helping the doctors, farmers and pharmacists that he thought was a fantasy to help a few weeks back!

PALIN: Well, dear Lord, these boys are so arrogant, and that's getting in the way of sound policy that will keep America secure and our allies. Here John Kerry saying, yes, we're not at war with ISIS. Well, John, ISIS is at war with us, the president saying previously that ISIS could be managed -- no, Barack, you manage your golf foursome perhaps, but you don't manage a threat like this. You destroy the threat. And to claim last night also our president saying ISIS is not Islamic -- ISIS says they're Islamic.

They are so full of deception that America should be absolutely concerned with the policies that are going on. And as I watched the speech last night, Sean, the thought going through mind is I owe America a global apology because John McCain -- through all of this, John McCain should be our president! He had the advice today, so giving to Barack Obama, and he will not listen to it, about the residual forces that must be left behind in order to secure the peace in Iraq that we had fought so hard for!

HANNITY: As you're saying this, I want to put up a map because I want to show as you're speaking about the cities -- all of these cities -- and you can see them all -- Tal Afar, Mosul, Sinjar, and you know, run through the whole list of them there, that this is now area controlled because the president did not employ the strategy -- bragged about pulling out 140,000 troops. If he would have done this a year ago, Fallujah, Tikrit, Mosul -- these wouldn't have been taken over now by ISIS! He said ISIS is not a state!

PALIN: Well, and ISIS calls themselves a state also. But no, that triangle, of course, which is the foundation in the region of their power -

We don't have to have combat troops over there at that time, but the residual force in order to secure. But no, and now here we are saying, Well, it's going to take boots on the ground to win this thing, and yet we're not going to send boots on the ground. We're going to contract this thing out when there's no mightier power than the red, white and blue?

HANNITY: Let me ask you this. When the president says that the Islamic State is not Islamic, when he says that ISIS not a state but they have more territory, bigger than the size of Belgium -- so they have the money. They're more brutal. Now they have the territory, maybe not recognized by the United Nations, but they certainly own a lot of that territory.

And the president said another thing. He said that ISIS has no vision. I'm thinking, don't they have a vision? Isn't what they were doing in Mosul, either convert or die -- isn't that a vision for a caliphate where the world is dominated by their brand of Islam?

PALIN: Sean, it's not just a vision that's so obvious. It's an articulated mission that they're on, and that is the caliphate. That is a takeover of the region. And guess what? We're next on the hit list.

So when Barack Obama, like the rest of us, hear these bad guys, these terrorists, promising that they will raise the flag of Allah over our White House, for the life of me, I don't know why he does not take this serious, the threat, because, yes, it's more than a vision. They're -- just like Hitler did all those years ago when a war could have been avoided because Hitler, too, did not hide his intentions -- well, ISIS -- these guys aren't hiding their intentions, either.

HANNITY: All right, Governor, thank you. Good to see you. Appreciate it.