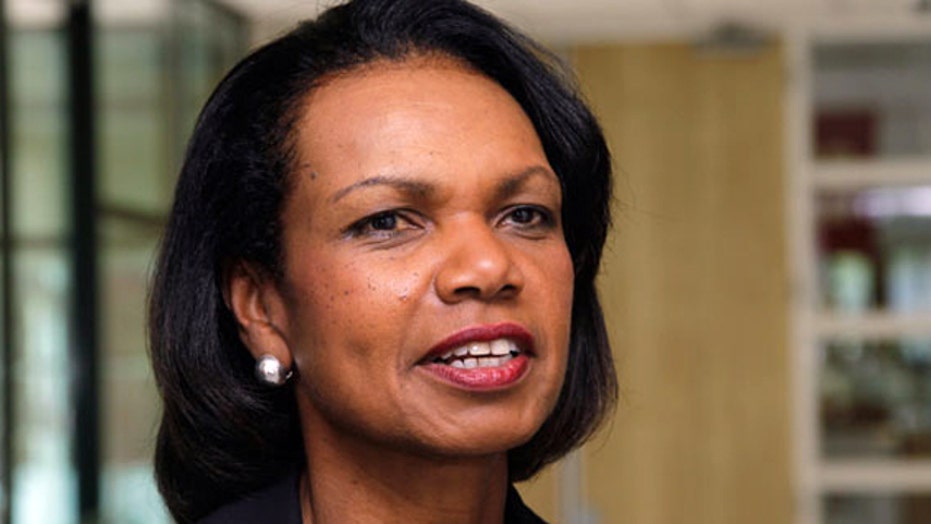 Professor explains why he signed the petition

This is a rush transcript from "Hannity," March 5, 2014. This copy may not be in its final form and may be updated.

SEAN HANNITY, HOST: The faculty council at Rutgers University in New Brunswick, New Jersey, is urging the school to rescind its invitation to Condoleezza Rice to speak at this year's commencement. Now Rutgers is awarding an honorary doctor of law degree to the former secretary of state and paying her $35,000 to speak.

Our own Ainsley Earhardt visited the campus to track down some of the 200 professors who are now protesting, and here is why they say they object.

UNIDENTIFIED MALE: Booking a commencement speaker is honoring the speaker and also offering a role model to students. And I think we could make better choices than to pick Condi Rice.

UNIDENTIFIED MALE: The commencement is a place where students should be happy and joyful and proud of their achievements and not be distracted by political controversy.

AINSLEY EARHARDT, FOX NEWS HOST: So it is not about Republicans and Democrats?

UNIDENTIFIED MALE: Not at all. I have very good Republican friends and some of them who are members of the Tea Party. That's not the issue. For me it is the morality of what was done during the war.

RUDOLPH BELL, HISTORY PROFESSOR, RUTGERS UNIVERSITY: Yes. I'm one of the people helping to circulate it.

HANNITY: And you are upset about the effort, her role in misleading the American people?

BELL: I think we are concerned with two areas primarily, the misleading of the American people on the situation in Iraq, particularly whether there were weapons of mass destruction. And then her co-involvement in enhanced methods of interrogation I believe is the phrase she uses.

HANNITY: Let me ask you this. If Barack Obama were to speak at the commencement, would you support him being there?

HANNITY: Would you support him?

BELL: I think by then, he's lame duck.

HANNITY: Would you support it? Would you be protesting like you are Condi?

BELL: I'd have to think about that.

BELL: I don't agree with that. I would support Governor Christie speaking.

BELL: That is not why I would pick Obama.

BELL: The reason for inviting Obama would be because for his office, the same as Governor Christie. I would have no objection to inviting --

BELL: -- president of the United States.

HANNITY: A black secretary of state.

BELL: She has no office. She's a professor at Standard.

HANNITY: Excuse me, but a prominent role in our country's history, and a prominent position, you may disagree. Isn't a college campus where we have the most free speech?

HANNITY: You got her cheap, I charge a lot more.

HANNITY: That is correct.

BELL: Were you invited Rutgers ever? I don't think so.

BELL: Anyway, on academic freedom grounds, I would never protest her coming to Rutgers. A commencement speaker is different. That is a faculty-governance issue.

HANNITY: Can I just say that you would want Obama to be your commencement speaker --

BELL: I don't want him or not want him.

BELL: I'm a historian. I wait 100 or 200 years to make judgments. I'm not ready to make a judgment about Obama.

HANNITY: You're wimping out.

BELL: Not at all. I'm perfectly happy to tell you that --

HANNITY: You don't believe in academic freedom, freedom of speech.

BELL: I totally believe in freedom of speech.

HANNITY: Then why are you trying to silence someone?

BELL: I'm not trying to silence her at all. She's entirely welcome to come as anything but commencement speaker.

HANNITY: You should be thankful to God that you got someone as qualified as her and I bet you're not going to get qualified people if you keep acting this way. Good to see you.