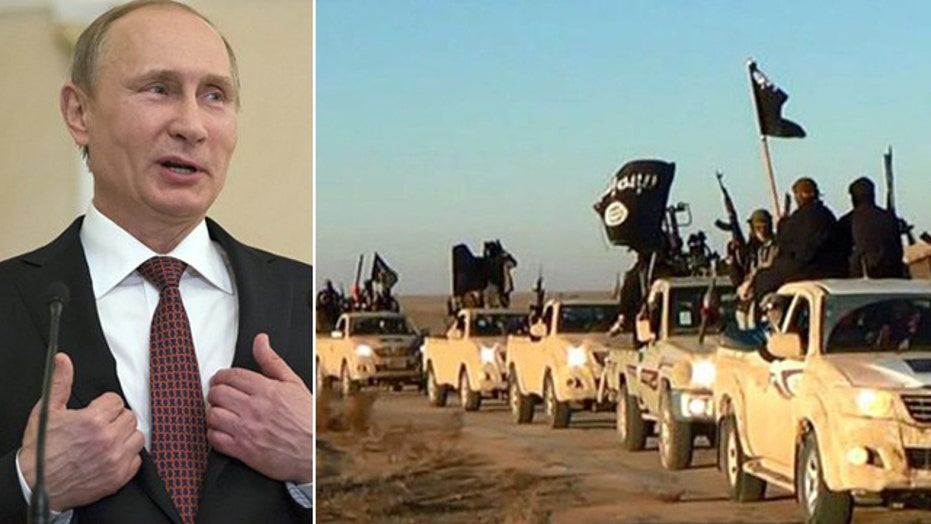 Vladimir Putin to the rescue?

Charlie Gasparino: If you want a leader that's in bed with the mafia, which he is, you want to break bread with him and let him lead this financial coalition, it's one of the dumbest things in the world. I can't believe president Obama is allowing it to happen. It fits with his pattern of not having a plan here. This is getting at -- I'm not saying I want boots on the ground to defeat ISIS, but one of the things we could do is financial stuff. Allow Russia to take the lead on this is totally insane.

Charles Payne: Here is the bottom line. President Obama, not only does he like leading from behind but has no clue how to deal with this.

Dagen McDowell: We have no alternative at this point, right? ISIS has a $2 billion war chest just from oil fails reportedly. Who better to crack down on the mafia which is ISIS than somebody in bed with another mob.

PRESIDENT SLAMS STAPLES ON HEALTHCARE: "SHAME ON THEM"; STAPLES FIRES BACK FOR EXTRA THREE YEARS OF TAX REFUNDS

Charles Payne : President Obama has contempt for capitalism but when he talks about Staples, it's like contempt on Staples. Staples funded by Mitt Romney. Mitt and his crew helped them stock their shelves. Went on to hire millions of people to help start millions of businesses in America, an amazing beautiful American success story. Here is the real rub. During that interview -- you are not a fan of the president?

Charlie Gasparino: I would say this. I think Staples is doing this primarily because of the healthcare law.

Adam Lashinsky: Well, I'll try to reframe this in terms that are slightly more favorable to the president. I will, by the way, agree maybe he didn't make the best choice of a company to talk about given the facts. What he is saying is, look, they and many other companies have an opportunity to take advantage of the provisions of the health care law by adjusting their hiring.

Dagen McDowell You see one flying near Reagan airport in Washington, D.C. They're everywhere and the FAA has zero control over what's going on. They wrote rules, they ran stated being able to fly niece drones, can't go above 400 feet. You have to notify air traffic control if they're within five miles of an airport. It's not helping. It doesn't party. These people are stupid, the people monitoring the drones are even dumber. Keep them on the ground.

Adam Lashinsky: A lot of these people around where I live in Silicon Valley who are so crazy about drones, I think they're crazy. I think they need to be stopped before something bad happens because I don't want one of those things hitting a plane I'm flying in, Neil.

Charlie Gasparino: I'm trying to figure out the libertarian argument to see this is a good thing. I should have consulted Judge Napolitano.

Charles Payne: I think there will be a time when they're going to be ubiquitous, I think we'll have delivers, but near airports is nuts. I believe there will be a day I will order a book from barns and noble and they say it will be at my house in 30 minutes via a drone.