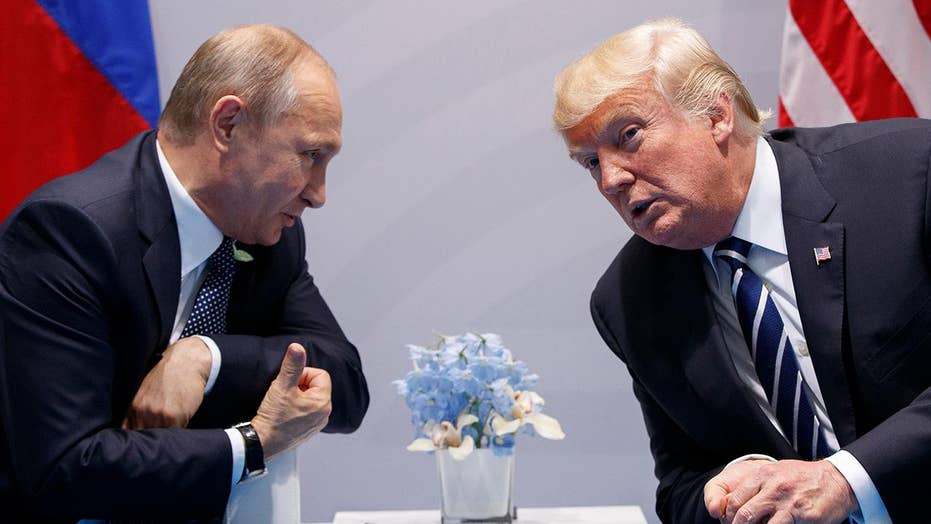 This is a rush transcript from "Special Report with Bret Baier," March 20, 2018. This copy may not be in its final form and may be updated.

PRESIDENT DONALD TRUMP: I had a call with President Putin and congratulated him on the victory, his electoral victory. The call had to do also with the fact that we will probably get together in the not-too-distant future so that we can discuss arms, we can discuss the arms race.

SENATE MAJORITY LEADER MITCH MCCONNELL, R-KY.: When I look at a Russian election, what I see is a lack of credibility, so calling him wouldn't have been high on my list.

BRET BAIER, ANCHOR: The president meeting with the Saudi Crown Prince at the White House today, but the headline ended up being his call with Vladimir Putin, congratulating the Russian leader on his election won which was not a surprise. But it got a lot of reaction here in Washington and Arizona -- there's Senator McCain's statement, "An American president does not lead the free world by congratulating dictators on winning sham elections, and by doing so with Vladimir Putin President Trump insulted every Russian citizen who was denied the right to vote in a free and fair election to determine their country's future, including the countless Russian patriots who have risked so much to protest and resist Putin's regime."

With that, let's bring in our panel: Jonah Goldberg, senior editor at National Review; Amy Walter, national editor for the Cook Political Report, and Ben Domenech, publisher at The Federalist. Ben, thoughts on the reaction, a lot of it here in Washington, to this statement and this communication.

BEN DOMENECH, THE FEDERALIST: It's a different situation now in terms of our relationship with Russia then it was several years ago when we saw President Obama giving congratulations to Putin over a recent election.

This is a situation that I think is going to turn into its own sort of form of a reset or an attempt by the Trump administration to engage in that behavior. Obviously they want to get rid of this investigation that has been ongoing, they want it to come to a conclusion and they want to talk to Putin about a number of different factors. But the domestic scenario here, the situation in Washington really hasn't allowed them to do that yet.

AMY WALTER, COOK POLITICAL REPORT: But it is very different from the time of Obama, and even very different from just a couple months ago, because this is no longer just simply about Russia meddling in the election. We are now talking about poisoning in Britain. We have not had discussions yet on that, and apparently the president did not raise that issue with Putin.

So I think this is one of those issues that has been ongoing since the president has gotten into town that divides the Republican Party, much the way the issue of trade divides the party, that you are going to have folks in the camp that say there should be absolutely no relationship with Putin. He's a bad dude. We should always see him as a bad dude. Don't ever try to make this relationship work. And folks that are aligned with the president who do want to see something happening.

But the bottom line is, there's a whole lot of this happening even in the last couple of months that the fact that the president didn't raise that I think is a good part of the reason why so many Republicans are worried.

BAIER: He's talking about the poisoning in Great Britain or the sanctions that this regime -- this administration has put on the Russian regime, doesn't talk about that.

JONAH GOLDBERG, NATIONAL REVIEW: Right. There's this weird double game going on where the administration actually has been quite tough on Russia. Donald Trump hasn't been rhetorically, and it sets people off around Washington because of all of the other baggage that we were referring to here.

I agree a lot of things have changed. One thing hasn't changed. Russia is not a democracy. And I didn't like it when Barack Obama talked about congratulating Vladimir Putin, and I don't like it when Trump does it for the simple reason -- and I don't like it when Sarah Sanders says we can't dictate how they do things in Russia. We are not talking about dictating. We're just talking about bearing witness to the truth, which is that it's a dictatorship, it's an authoritarian regime, and this was a sham election, and America was supposed to stand for some of that stuff.

BAIER: But you point out that this regime, the Russian regime, is facing a lot of sanctions from the U.S.

GOLDBERG: I agree. It's this weird thing. It's almost like Trump can't bring himself to say the words, maybe because he doesn't care about the rhetorical niceties, maybe because he has this idea about having a relationship with Putin, maybe just because he wants to see people's heads explode on MSNBC. Maybe all of the above. But rhetoric matters, and telling the truth about this regime is worthwhile.

BAIER: I want to turn to domestic politics now. A lot hangs in the balance, government funding. Is there a DACA deal? Let's listen to the DACA deal back and forth.

SARAH SANDERS, WHITE HOUSE PRESS SECRETARY: The deal that was offered earlier this week included a three-year extension for DACA in exchange for the border wall and border security funding.

HOMELAND SECURITY SECRETARY KIRSTJEN NIELSEN: I just had a meeting with a variety of senators who seemed surprised that some of the offers made by the administration were rejected out of hand.

SENATE MINORITY LEADER CHUCK SCHUMER, D-N.Y.: But there are going to be lots of opportunities for us to try and help the DACA kids. Right now, the president, as he did a few weeks ago, is standing in the way.

BAIER: But is it fair to say that because the president says it's the Democrats who don't want to take this deal, they want it as an election issue?

DOMENECH: I think the Democrats clearly do want it as an election issue, but in addition to that I think you have a situation here where we are dealing with a bill that is completely a mess. It has all these different priorities smashed into it in different ways that don't fit. We are still seeing a couple of those come to light. I don't think there is any real chance of a deal at this juncture just given the politics of this issue. And it is only going to continue to be demagogued as we go forward.

The reality is that earlier in the show they were talking about this is -- John Cornyn was saying this is the way that business works now and things can't really work. Guess what, that's what things are going to look like for the future forever unless we have a fundamental change in the way the Senate and Congress behaves.

BAIER: Amy, what about funding? We are going to probably have a snow day tomorrow, which means that the week gets shorter, and probably into the weekend.

But the bottom line really is that this is it. This is the last piece of legislating we are going to see I think for the rest of the year. So whatever gets done in this bill is what is going to get done, and if not, well, guess what, got to wait till 2019.

DOMENECH: It's a huge gamble, too, on the part of Republicans to do that, basically saying we are going to rest on our laurels, our singular achievement of this tax bill.

BAIER: This is why people hate Washington.

GOLDBERG: It's one of the reasons.