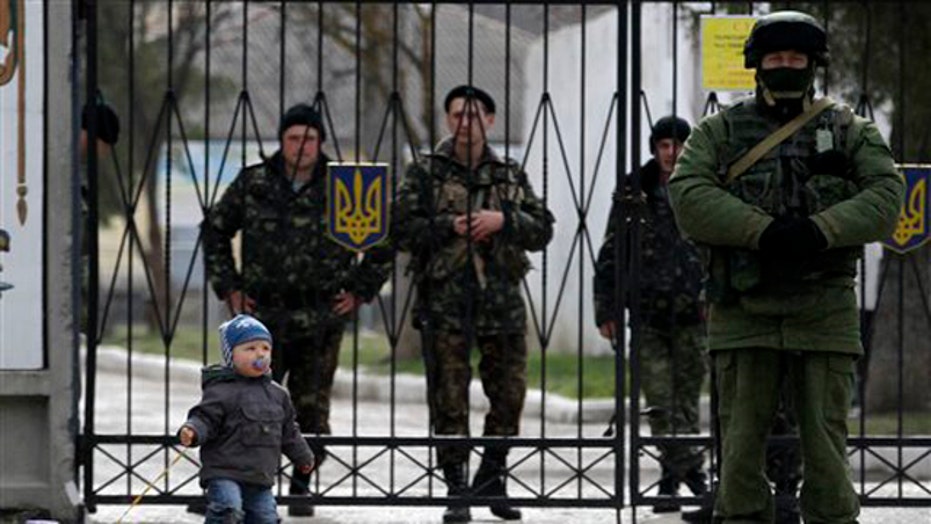 This is a rush transcript from "Hannity," March 4, 2014. This copy may not be in its final form and may be updated.

SEAN HANNITY, HOST: Joining me now live on our newsmaker line about the situation that's tense in the Ukraine, former Defense Secretary Don Rumsfeld is with us. Mr. Secretary, thank you for joining us. Your reaction to the events of today. And do you think John McCain is right that, in fact, the president doesn't understand Putin's ambition?

DONALD RUMSFELD, FMR. DEFENSE SECRETARY (via telephone): Well, Sean, most of the discussion that's taking place is what's Putin doing today and what should we do today and all this chatter about the international community and the world opinion and the United Nations.

The cold hard facts are that, you know, before, it was Syria, and today it's Ukraine. Tomorrow, it could be Central Asia, Iran. It could be more activity by the PRC in the South China Sea. What's really happening is that the central problem is American weakness. We're managing our economy like juveniles and telling the world that in the next decade or two, we're not going to be there. We're cutting back our defense funds.

When Eisenhower and President Kennedy and President Johnson were in office, we spent 10 percent GDP on foreign defense. Today, we're below four percent. Our European allies are below two percent.

If you think of magnetic particles on the table, all of those particles in the world are starting to turn away from the United States and turn towards Russia!

HANNITY: Well, wasn't that what Chuck Hagel, when he announced that we're going to go to Pre-World War II troop levels with our Army -- isn't that pretty much what he said, when we can't expect American dominance in the seas, in the sky, in space any longer, that that is not something we can come to expect any more? Isn't that their position? And won't that void be filled by somebody like Vladimir Putin or an alliance, as we see between Putin and China, China having their own territorial ambitions?

RUMSFELD: Absolutely. I mean, think of it. Russia has a very modest economy, if you leave out energy. It has a conscript military that's not impressive. There's not a U.S. military person on the face of the earth that I've ever met who would even think of trading our military for their military. Putin is punching so far above his weight class, and the United States isn't punching at all!

HANNITY: So you're basically saying this is accumulation. I mean, we can really...

HANNITY: Because we're in decline.

HANNITY: Yes. Well, that's not something you'd be proud of. Doesn't this go back to -- I mean, Putin got everything he wanted on nuclear arms, and we got nothing in return. And even taking it back, when -- when we had, for example, Obama's unilateral concessions when it came to Poland and the Czech Republic on missile defense. I think that was a mistake, obviously, not following up on his threat with Syria and the red line after the red line was crossed and chemical weapons are used.

You know, it seems like Putin is enjoying sort of, like, sticking his middle finger in Barack Obama's face, like with Edward Snowden. What should the president's response be? What would you recommend if you were the defense secretary right now?

RUMSFELD: The only thing one can do is don't chase all the little bitty problems. Little problems are being caused by our weakness, by the general demeanor of the United States, by the fact that we're not managing our economy responsibly, that we're cutting back our defense capability. I mean, Eisenhower said peace through strength. Other wise men have said, By golly, if you want to avoid wars, you want peace, be strong and prepare for war.

We simply cannot continue down the path we're going and not expect not just the problems we're currently facing, but a whole new crop of problems.

RUMSFELD: And the only answer at first, the president of the United States to develop a strategy, create a mission, go out and get other countries to agree to it, and with political, economic and security elements and activities that demonstrate the United States is, in fact, a power.

HANNITY: Are you saying that because of President Obama's weakness that there is -- we are undergoing, the world right now, a geopolitical shift? And do you foresee this alliance, if you will, a new access (ph) being formed with China, Russia, maybe even Iran, Syria involved in this? Do you foresee that getting to be a big problem?

RUMSFELD: Well, I mean, the reality, Sean, is that Russian military is -- is -- they've got a lot of nuclear weapons, but the have a bad conscript army. Their economy is modest except for energy. And they're not a great power, but they have the ability to pick them off one at a time. Their neighbors near abroad, they can do that. They went into Georgia, as you'll recall.

Ukraine is enormously important to the world. And the idea that we would have created an environment that is hospitable for his absolutely outrageous behavior. But mark me, it's not just Putin. It's going to be the People's Republic of China, even if it's not in cahoots with Putin.

HANNITY: Let me -- let me ask you this because it seems like the president and the secretary of state keep lecturing Putin that they have a 19th century mentality, and this is the 21st century and they're not as enlightened as the president is. He made a speech where -- in which he says the great power conflict is a thing of the past. I want to ask you about these words that the president uttered. Let me -- listen to this closely.

PRESIDENT BARACK OBAMA: Those countries that are large and powerful like Russia or China, you know, we have the kind of relationship with them where we're not getting into conflicts of that sort. At least, you know, over the last several decades, there's been a recognition that neither country benefits from that kind of great power conflict. So the kinds of national security threats that we're going to confront, they're terror threats, they're failed states, they are the proliferation of deadly weapons.

HANNITY: It looks like Vladimir, when you listen to those words, that Vladimir didn't get the memo on this, and it seems to me when you maybe add that together with man-caused disasters, overseas contingency operation -- is the president fundamentally missing the lesson of human history that evil exists both on a micro level, human beings, inhumanity to fellow human beings, or mass murderers from Hitler to Stalin on down? Does he seem to be -- it seems like there is a missing chip here. He doesn't recognize that this can repeat itself.

RUMSFELD: I think that's a fair comment. I would also add there's a confidence question. I mean, take, for example, the fact we have maybe 125 status of forces agreements around the world.

RUMSFELD: It doesn't take a genius to get one. But we do not have a SOFA -- a status of forces agreement -- in Afghanistan and or Iraq.

RUMSFELD: I mean, people are fussing at Secretary Kerry. I think he's been dealt a very bad hand.

RUMSFELD: And his predecessor, I can't think of a single accomplishment.

HANNITY: Well, I think, John Kerry sounded like a buffoon this weekend! I mean, to be blunt.

All right, let me -- let me move on. The president tonight is at the home of Chuck and Lynda Robb in McLean, Virginia, at a DSC -- DSCC event. By the way, tickets range from $10,000 to $32,400. Earlier today, the president was at a school in the middle of a global conflict, the leader of the free world is taking a photo op at a grade school and making statements about the state of what's happening in the Ukraine and Crimea in front of school children.

Do you -- do you have a problem with the priorities of the president today? There he is on a -- on a little kid rug today.

RUMSFELD: Sean, it's been a consistent pattern. How the man can go play golf and go to Democratic fundraisers and spend his time attacking Republicans this week, instead of deciding what in the world our country ought to do and how we can go out and get other countries to be supportive and put political, economic and security pressure on the terrible behavior by the Russians.

It's inexcusable that this man has no concept of what a president ought to be doing! He is simply not doing the job of a leader!

HANNITY: Pretty -- pretty strong words. Mr. Secretary, thank you for being with us. Appreciate your insight tonight.