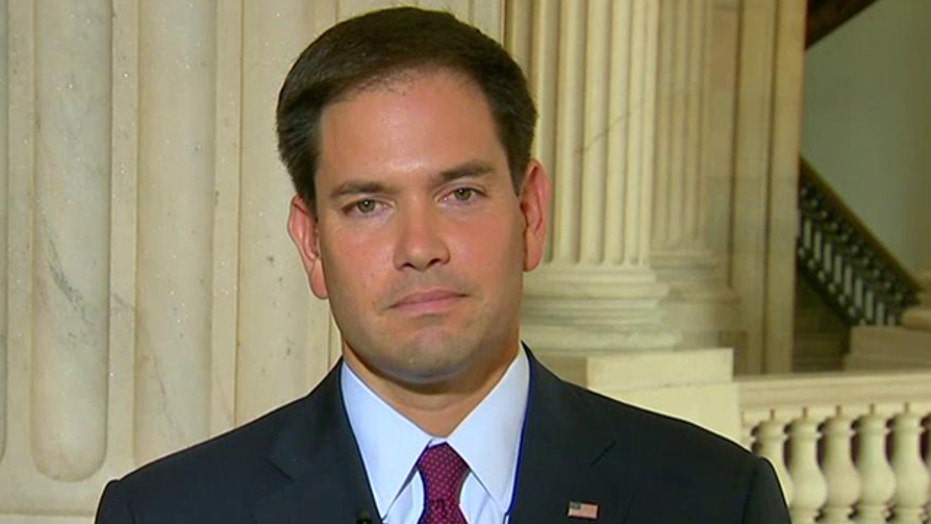 Lawmaker on how he would deal with the crisis

This is a rush transcript from "Hannity," July 29, 2014. This copy may not be in its final form and may be updated.

SEAN HANNITY, HOST: Here now to tell us how he would not only deal with the situation on the border, but also the growing tension tonight in the Middle East, Florida Senator Marco Rubio. Senator, thank you for being with us. We really appreciate it.

HANNITY: Let -- let me start -- you know, the president always says he wants consensus. Are there two things that I would think Republicans and Democrats could agree on? Number one, the 2008 exemption for the kids in Central America, to remove that. That was -- that was put in there for a specific purpose, to stop the sex-trafficking of children. And number two, can everybody just not agree that we need to control the border? Can we not agree on those two specific things?

RUBIO: So that's the heart of why this immigration issue becomes so difficult. On the one hand, America's a deeply compassionate country as evidenced by the fact that every year, a million people come here legally,.  But that's being abused, and the result is our immigration problem.

The same with this law. This law is a well-intentioned law designed to help children who are victims of human smuggling and trafficking. But now we see how that law is being abused and people are coming because they know that if they arrive here with children or as a family, they're going to get to stay. They're going to be united with family members who claim them. There are huge backlogs for these court cases. In some instances, when the case comes up, they don't even show up.

And so last week, when the Honduran president was here, he was very clear. The reason why this is happening is because of ambiguities -- that was the term he used -- about our immigration laws. Translation, ambiguity is people in Honduras and Guatemala and El Salvador know that if they come here, they're probably going to get -- for all practical purposes, going to get to stay.

HANNITY: Yes. I don't know where the sense of urgency is, considering this is a such a big problem and it's costing the country a lot of money. If the president moves to act unilaterally and use what he believes is executive authority, do you believe he has the authority to do that?

RUBIO: No, he doesn't. He can refuse to enforce the law, which is what the executive order, in essence, would do. But I would predict that he's probably going to -- and I've been warning about this now, Sean, for over a year, and I warned about this last year, that I thought this is where he would head with regards to this issue.

If, in fact, he gives work permits to five or six million people, you're going to see an additional surge of people coming because the way this is translated back in these countries by these trafficking organizations and by relatives here in the U.S. that call back there, through word of mouth, is that, You should try to come here because this country is accommodating people, even though they're violating the law.  It's just a lure to bring more people over illegally.

HANNITY: You took a lot of heat, Senator, from conservatives over the immigration law that was passed in the Senate. You've said many times you wouldn't support that bill today. What is the bill that you would look to support today?

RUBIO: No, first of all, I mean, the way the bill did it was, in large part, it began with this enforcement. Now, I think it's pretty clear that in order for there ever to be any movement on immigration reform, which I continue to believe this country needs, first you need enforcement reform. And that's what no one is talking about. You can't even begin to discuss these other issues, especially now, given what's happening, unless you first deal with that. And that's critically important.

I continue to believe we have to enforce our immigration laws, and we have to reform them so that they work better. And ultimately, you're going to have to deal with the fact that you have 12 million people living here for longer than a decade who are here illegally.

RUBIO: You can't even have that conversation until you begin to enforce the law.

HANNITY: So the bottom line is, you are a secure the border first person? Am I speaking for you?

RUBIO: Yes, I've always believed that that's critical. That's the direction the Senate bill went. But I ultimately always believe, and still do, that you can't even begin to touch the other elements of it until you do that first. That is especially true now, given this crisis.

HANNITY: Let me -- let me ask you, and moving on to Israel, and the administration constantly pressuring Israel to stop in their battle against the infrastructure of the terror group, Hamas, which in their own charter calls for the destruction of Israel.

Do you think when we give the Palestinian Hamas government as much money as the United States does, like we gave Mohamed Morsi, the former head of the Muslim Brotherhood, president of Egypt at the time, all of this money and F-16s -- are we making a mistake? Are we becoming de facto supporters of what are ostensibly terrorists and terrorist groups by doing that?

RUBIO: Well, first of all, the law says we can't do that. And here's the reason why that money used to go to the -- or goes to the Palestinian authority, so that their security forces can provide security and fight against extremists in Judea and Samaria, what they call the West Bank.

Here's the problem, though. Once they linked up with Hamas, now, basically, you are giving that money to a unity government which Hamas plays a role in. And that's the reason why we shouldn't continue to do that. And unfortunately, we are now in a position where because these two have come together, there's no way of telling whether the funds that are going to the Palestinian authority wind up in the hands of Hamas.

HANNITY: What should the president be doing? It seems like we're pressuring the wrong side here.

RUBIO: We should treat...

HANNITY: We'd break up the infrastructure of the terror groups, right?

RUBIO: Right. We should treat our friends as friends, and we have no stronger ally probably anywhere in the world, but certainly in the Middle East than Israel. And we should link arms with them and understand what they're going through right now, and in no way create any daylight between us.

I'll tell you when there's a ceasefire, when Hamas ceases to exist, when they lay down their weapons. And in the absence of that, Israel has no choice but to do everything it can to dismantle Hamas. And it is tragic that civilians are dying and children are dying. A hundred percent of the responsibility for that lies with Hamas because they are telling people and they are asking people to put themselves on rooftops and expose themselves to danger while their leaders are hiding in basements and bunkers.

HANNITY: And do you believe it would be a long-term strategic mistake, a tactical error, if Israel did not break up their entire tunnel system and their infrastructure...

HANNITY: ... and take out all their rocket-launching facilities?

RUBIO: Absolutely. This is what Hamas's purpose is, to attack Israel. they're going to come back and do -- this is the third time in five years that they do this.

HANNITY: All right, Senator, good to see you. Thank you for being with us.

HANNITY: We appreciate it.