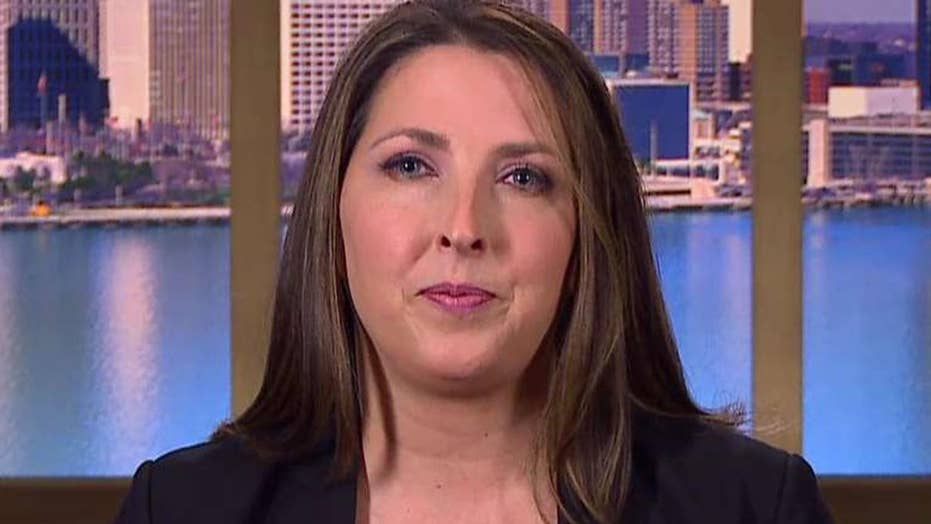 Ronna McDaniel on US economy, GOP push for tax cuts

This is a rush transcript from "Your World," October 6, 2017. This copy may not be in its final form and may be updated.

NEIL CAVUTO, "YOUR WORLD" HOST: All right, here's what those hurricanes we were dealing with last month did. They knocked the economy for a loop last month, 33,000 jobs lost, thanks to Harvey and Irma that sort of just disrupted everything.

A lot of economists look at this as sort of a one-off, that the unemployment rate down now to 4.2 percent, that the underlying -- the fundamentals look good for the economy.

Republican National Committee Chairwoman Ronna McDaniel on all of that.

Ronna, very good to have you. Thank you for coming.

RONNA ROMNEY MCDANIEL, CHAIR, REPUBLICAN NATIONAL COMMITTEE: Always great to be here. Thanks for having me, Neil.

CAVUTO: That would be largely expected. I do know, as you know, that these guesstimates on what the jobs numbers would be were all over the map, because no one could get a sense of how much those storms would hit. What do you think?

I think it's definitely a byproduct of the hurricanes. You actually have businesses that couldn't even report their jobs numbers because they were dealing with the aftermath of the hurricane.

And, like you said, the underlying fundamentals are good. And I think the most important one is that more people are working. The labor participation rates are up. The unemployment number is down. And you are seeing incomes rising.

So, the economy is healthy. You're seeing consumer confidence high and you're still seeing the Dow breaking records.

CAVUTO: Are you surprised that the economy is doing as well as it is, and I -- whether it's just on the underlying fundamentals are good or optimism that the president's tax cuts are going to become reality? What do you think it is?

ROMNEY MCDANIEL: I look at it as four things. I think the deregulation has helped kick-started our economy. The president has cut more regulations than Ronald Reagan. You look at better tax or trade policies that the president is embarking on. You're seeing them looking at renegotiating NAFTA.

And then you look at the energy policy, the Dakota and the Keystone pipelines, and expanding out energy footprint. And then this final part of it, which is going to be the tax cuts, bringing more money to the middle class, lowering the corporate tax rates and bringing jobs and wages up in our country.

CAVUTO: Are you worried that not all Republicans are on the same page on this tax cut? That's to be expected, of course.

But some have even hinted that, if everyone doesn't get a tax cut -- I believe it was Rand Paul -- he can't support it. And there is a possibility in this, depending on the math and how you crunch the numbers, that some won't.

ROMNEY MCDANIEL: I think it's critical that we pass tax cuts.

I think it's something we ran on. It's something the president has talked about. Republicans have talked about this, especially with the inability to pass repeal and replace. We have to get this done. People are hurting. We need to kick-start our economy.

CAVUTO: So, when he says that, Ronna, that look, I mean, everyone has got to have a tax cut, and he might resist, and others might resist -- John McCain comes to mind -- then you have got to depend presumably on some Democrats, right?

And that could be dicey, right?

Give people more of their hard-earned money. We know what Democrats want to do. They want to raise taxes. They want to expand government. Republicans need to give money back to the American people, especially the middle class, who have not seen their incomes rise, who work so hard.

We need a middle-class tax cut in this country. And Republicans have got to come together and get this done. It's critical. It's something we ran on. And we're going to be held accountable by our voters if we don't deliver on the things that we ran on.

CAVUTO: Do you think that if some Republicans balk, that the way you assure Democratic support is to prove to them that you're not giving a benefit to the rich, and hence this talk of maybe limiting the tax impact for the well-to-do, that maybe there will be a fourth rate beyond the 35 percent rate that's been talked about here, that there might be a special group that sees no change in the upper income?

ROMNEY MCDANIEL: I think the president has made it very clear that the focus is relief for the middle class.

And as long as we're delivering on tax cuts for the middle class, I think that we're keeping the promises that the president made.

CAVUTO: Well, what does that mean? So, that the rich in this case, that they would just have to deal, right? If they're expecting their rate to go to 35 from 39.6, it might not, right?

ROMNEY MCDANIEL: Yes, we will see what they come out with.

I think there's room for bipartisanship. It's something that we need to get done. It's going to be good for economic growth, and especially the corporate tax rates lowering, bringing more jobs back into this country.

All in all, this is going to be good for our economy. It's going to be good for the average American. It would be great if Democrats could get on board, but Republicans have to deliver. We have got to find a way to get to yes, because it's one of the things we ran on this last campaign cycle. And voters are looking for us to deliver on the promises that we made.