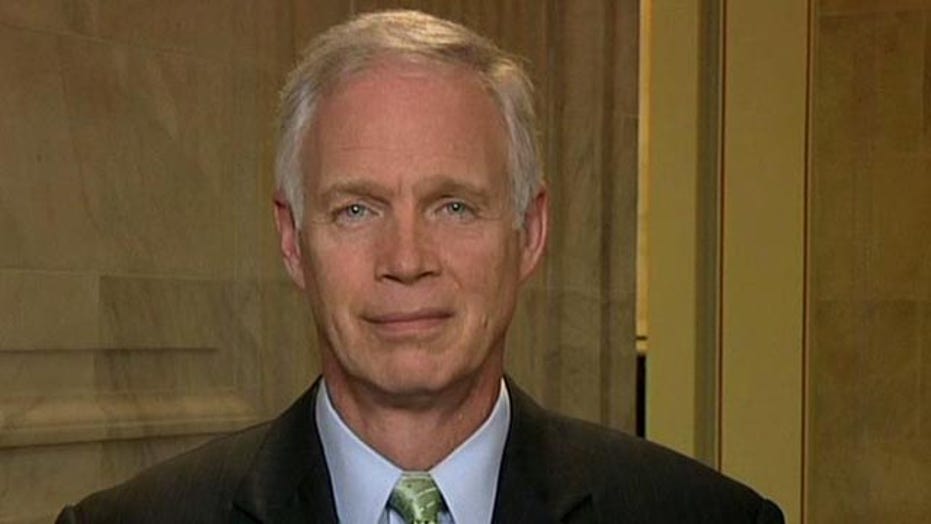 This is a rush transcript from "Hannity," October 31, 2013. This copy may not be in its final form and may be updated.

SEAN HANNITY, HOST: My next guest is taking action to force the president to keep his word. And earlier today, Senator Ron Johnson filed the If You Like Your Health Care Plan You Can Keep It Act, giving you, the American people, the freedom to keep your plan if you so choose.

Here with the details, the man himself, Wisconsin senator Ron Johnson. Senator, good to see you. Welcome back.

HANNITY: All right, after -- but we could do the if you like your plan, you can keep it. I want my $2,500 savings per family per year act.

HANNITY: And oh, by the way, the website is going to run easy act. Can we do that?

JOHNSON: Sean, this is about freedom. And of course, President Obama's promise is being broken to millions of Americans today. And so my bill simply does, is it allows those Americans to have that promise kept for them. So they can actually keep their health care plan, as President Obama promised.

And let's face it. That's the only way he was able to sell this to a gullible public, unfortunately. And so now we're faced with this, and I am encouraging my Democratic colleagues to join with me quickly to pass this bill so we can actually preserve those health care plans before they are extinct.

HANNITY: All right, let's -- let's go to the president's own words because he was so definitive. He said it so often. He said it as recently as last month. If you like your plan, you can keep your plan.

OBAMA, AUG. 14, 2008: And if you do have health insurance, we'll help make sure that your insurance is more affordable and more secure.

HANNITY: Period, no qualifier, no caveat.

HANNITY: How many people do you have signing onto the bill now?

JOHNSON: Well, currently, we have 40 Republican Senate co-sponsors. But you know, again, we need Democrat senators to the sign this bill.

And let's face it, the president was either being dishonest or disengaged. Did he not even have a clue what was in this bill? Did he not understand the negative consequences?

And Sean, you know, you're talking about ObamaCare horror stories. What really prompted me to act now was a couple from Wisconsin, both with cancer. The wife has stage 4 lung cancer. And they got dumped off, got dropped, canceled from the high risk pool, which actually works. And trying to get on healthcare.gov over 40 times, couldn't do it. And now they are in contact with some insurance companies without the government plan. They're finding out that their exposure's going to double, going from about $20,000 a year to $40,000 a year.

That's not health security. That's health insecurity. And it's being caused directly by ObamaCare.

HANNITY: You know, these are real people, and as I was pointing out earlier...

HANNITY: ... they've known for three years about this. And it's not only -- it's not only hurting the individual market, but it's also hurting small employers and large employers to the point Forbes is estimating now about -- it's going to be about 93 million Americans. And they're using, again, government numbers to get to that figure.

JOHNSON: No, millions of Americans aren't even going to realize they canceled their plan because they'll still have coverage under the same company. But what they're not going to realize is because of all the mandated coverages -- and Congressman (sic) Blackburn was absolutely right there. You know, some people want to actually purchase something. They actually want to have the freedom to purchase a lesser plan because that's what they can afford. They're not going to be able to afford the mandated coverages. So this president is driving up the cost of health care. He's going to make it less accessible. And that's just a real shame.

HANNITY: All right, let me play this for you. Is there anything we can do about the president's promised savings? Because most Americans now are -- are experiencing -- if they're not cancellation, outright rate shock and dramatic increases in their premiums, 45 of 50 states. Can you do anything about this promise of the president?

HANNITY: What do you think, Senator?

JOHNSON: Well, that was a pipe dream. I mean, anybody that believed that, I don't know what to say about them. You know, so obviously, that also is another broken promise. ObamaCare raises premiums and, you know, there -- there's no way -- there's no way that promise can be honored.

But we can honor the promise to millions of Americans if we pass my bill because there is a way to grandfather current plan. Americans should have the freedom to keep their health care plan, like the president promised. And so again, I'm asking Democrat senators to join with us.

HANNITY: There's not one Democrat, red state Democrat, even? Landrieu, Pryor, Begich, whatever his name is in Alaska -- not one of them that has the integrity to say, we have an obligation to uphold the promise we made? Nobody? Not one?

HANNITY: If You Like Your Plan You Can Keep Your Plan Act. We'll be following it closely, Senator. Thanks for being with us.

JOHNSON: Have a great night.