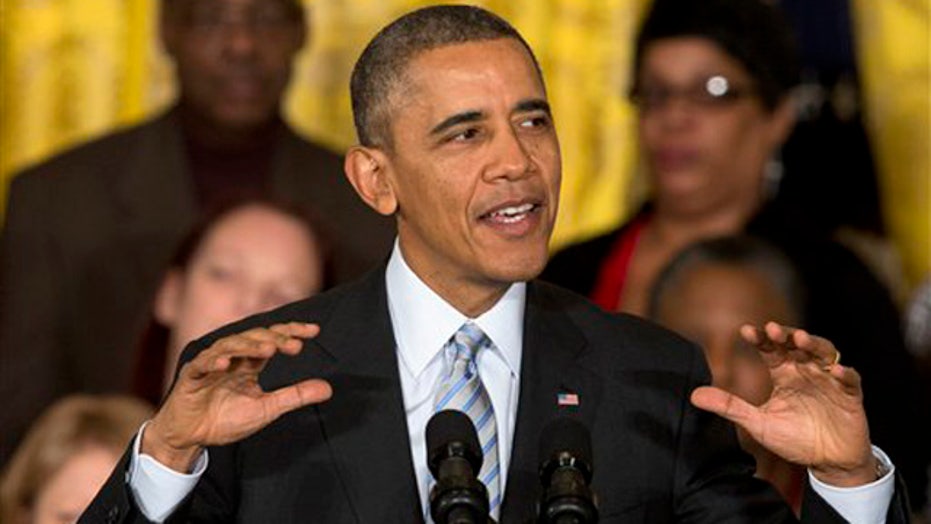 This is a rush transcript from "The Kelly File," February 6, 2014. This copy may not be in its final form and may be updated.

MEGYN KELLY, ANCHOR: My next guest spent the afternoon in the White House along with a number of people. Speaking with many folks familiar with this situation. He believes the real issue here is not enrollment, it is credibility. Ron Fournier is the senior political columnist for National Journal. Ron, good to see you.

KELLY: And so, you're somebody who has been defending the concept of this law and health insurance for, you know, reportedly it was going to be for 30 million Americans, now we're told we're going to have 31 million Americans without insurance despite the law. In any event, you're talking about how now it has just now come down to credibility. How? What do you mean?

FOURNIER: Yeah. Well, I know inside the White House, we're really worried about right now, is they know they really messed up early on and they're having a hard time with these numbers as Ed talked about. We can get that in more detail if you want. What they realize they have a big credibility problem, that this is a branding issue, this is like trying to sell Pepsi or Coke. And if you're not selling a product that people believe in, if they don't believe in the people who are selling it, you've got a problem. Even inside the White House they know they have a reputational problem that is setting them back at least six months, maybe even further and -

KELLY: So let me ask you, so is the solution to mislead more? Because we saw the president in his O'Reilly interview, talking about that nonsense, you know, Medicaid number, he is making up numbers saying -- taking credit, giving the law credit for getting all these people on Medicaid, you know, query whether that credit is deserved. But in any event, those numbers have been discredited by fact checkers, you know, across the country. They continue to say them. They say, 3.3 million Americans have enrolled now in the state exchange and the federal exchange. That is not true. We don't know how many have enrolled.

KELLY: Wait a minute. Just hold that thought, it is on tape, for the folks at home just in case they thought we were not going to play this, we are, watch.

FOURNIER: Good for you.

KATHLEEN SEBELIUS, HEALTH AND HUMAN SERVICES SECRETARY: Well, I think success looks like at least seven million people having signed up by the end of March 2014.

FOURNIER: Right. You can't undo the truth. They said they had to have about 48 percent of the people who signed up, had to be young invincibles, people who are primarily healthy to help make the math work, they're around 25 percent now. I'm sorry, they say they need 38, they're 25 percent now, they're not where they need to be, that is just a fact, you can't undo that. They're telling us they got 3.3 million, well, as you heard earlier, that number is basically made up. Because we don't know how many people have actually paid the insurance.

So in other words, today, I could have signed up seven times and I would have been counted seven times into that 3.3 million when I have not put a dime down on insurance yet. They're not being honest about that. And lastly, I know the talking points now is that 90 percent of the folks who "have signed up" quote-unquote actually had insurance before and lost it. That number, I wouldn't believe that number is really not plausible. The real number, even if you asked inside the White House is closer to 30 percent, even the White House is acknowledging that at least 30 percent of the people who have quote-unquote "enrolled" had insurance before all this happened. And if you do the math, 30 percent is too high for this to work.

FOURNIER: So, you know, this may end up again, I want people who need insurance to get it. But this may end up working well but if it keeps on heading the way it is now the numbers are not just going to add up. I want them to be honest about it.

KELLY: And I want the viewers to know, Ed Henry, he was talking about how the numbers went up in January versus earlier. But if you compare month to month, December and January, enrollment has gone down. December's total enrollment was 1.8 million, and today's report indicates that 1.1 million people signed up in January. That's a drop of 640,000-plus enrollees month to month, despite how they are spinning it. Ron, good to see you.

FOURNIER: Good to see you. Thanks for having me on.