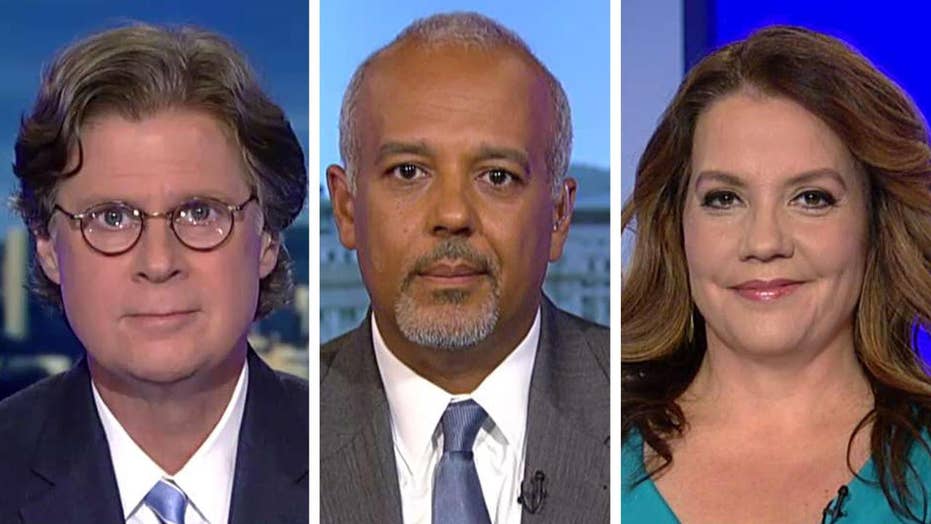 Twitter accused of 'shadow banning' some Republicans; reaction and analysis from the 'Special Report' All-Stars.

This is a rush transcript from "Special Report with Bret Baier," July 26, 2018. This copy may not be in its final form and may be updated.

REP. MATT GAETZ, R-FLA.: When people search on Twitter for an account that they might want to follow, typically those search results auto complete or auto fill in. But if people were searching for me or other prominent conservatives in the Congress, our accounts weren't coming up. That was not the same treatment given to Nancy Pelosi and Maxine Waters and others on the left.

SEN. JOHN KENNEDY, R-LA.: It sounds like a coincidence, kind of like when you disagree with President Putin you have a heart attack?

MIKE EMANUEL, FOX NEWS: Senator Kennedy always has a good line. Then there was quite the moment on the Internet when you had President Trump go after Twitter come on Twitter. "Twitter shadow banning prominent Republicans, not good. We will look into this discriminatory and illegal practice at once. Many complaints."

Can Twitter live to fight another day? Let's bring in our panel: Byron York, chief political correspondent for the Washington Examiner; Mollie Hemingway, senior editor at The Federalist, and Mo Elleithee, executive director of the Georgetown Institute of Politics. OK, Byron, what do you make of was there some shadow banning going on on Twitter?

BRYON YORK, WASHINGTON EXAMINER: It appears there was. I don't think there's any doubt that these big tech companies do lean left. There was a report in Vice that I think made a pretty good case that there was shadow banning going on against Ronna McDaniel, Devin Nunes, Matt Gaetz you just saw, and others. This was part of Twitter's plan to encourage a healthy conversation. The problem is Twitter gets to decide what is healthy. So I don't think it's really a surprise. It's kind of a continuation of what we see, infringement of speech on college campuses. People leave college campuses, they go work for Twitter, and this is continued. So I think it was probably a good idea for the president to point this out and give it prominence.

MOLLIE HEMINGWAY, THE FEDERALIST: He was wrong when he said it was illegal. I don't know if we have any actual law that can be cited that's actually illegal, but it's definitely a problem. Twitter and other social media companies that are restricting speech. If you care about the culture of speech, you want to make sure you have this free flow of ideas.

And I think conservatives have been complaining about this, not just the issue that was mentioned in the report of when you search for a name you can't find it, but actual downplaying of conservatives and hiding what conservatives are tweeting. You are seeing this across different social media platforms. It's partly because they built algorithms that have the bias built into it. They privilege certain types of communication and punish other types of communication. It's a very frustrating experience. You see a lot of people who want to control the discourse in regular media and social media, and it actually leads to a lot of frustration among the average population.

GAETZ: There are only four members of Congress that I've been notified have been shadow banned, myself, Mark Meadows, Jim Jordan, and Devin Nunes. And the thing that we obviously all have in common is that we are four of the strongest supporters of President Trump and we have been very critical of the Russia investigation. So I don't know if that's the reason why we were supposedly inadvertently caught in Twitters troll trap, but it seems very suspicious to me.

MO ELLEITHEE, GEORGETOWN INSTITUTE OF POLITICS: First I have to say as someone who works on a college campus that invites people from both sides of the aisle, I couldn't let your comment about college campuses go by without at least a subtle pushback, Byron.

When Twitter announced back in May how they were going to go after trolling, my initial thought when I read it is, OK, this is good. Pushing for more civil discourse on social media is a good thing. Trying to push back on those who are trying to disrupt conversation is a good thing. But I remember also thinking, they are going to get stuck here. They're going to catch the wrong people.

And it seems that this is what is happening here. The fact that Ronna Romney McDaniel had this problem, but someone like an Alex Jones at Info Wars didn't, that seems to be counterintuitive to what they are trying to do. Here's the problem. These social media companies are trying to be good citizens and encourage good debate and good conversation. They are trying to prevent themselves from being manipulated or being used as organizing tools by hate groups or by foreign governments. But at the same time, they want to be platforms for free speech. They are seeing it as a challenge to do all of those things. I applaud the effort for civil discourse, but they have shown that they still have some work to do to figure out how to do it right.

EMANUEL: OK, next issue, election security. We expect a meeting tomorrow at the White House. Take a listen to this exchange.

SPEAKER OF THE HOUSE PAUL RYAN, R-WIS.: We have got to make sure that we have the right kind of information sharing with states, with secretaries of states, and with anybody else that could see a cyber from Russia.

HOUSE MINORITY LEADER NANCY PELOSI, D-CALIF.: House Republicans refuse to act for any oversight, any founding, because they are now more concerned about covering up President Trump's activities than defending our democracy from foreign attack.

EMANUEL: So here we are three plus months away from the next election. How alarmed should we be, Mo?

ELLEITHEE: I think we should be alarmed. I think every independent analyst that has looked at our elections systems from a nonpartisan perspective keeps pointing to holes in the systems and areas where we are vulnerable. And I would love to see our federal government in a bipartisan way step forward. I don't think any administration has done what it needed to do in recent times. Step forward and figure out how to plug those holes.

HEMINGWAY: The strength of our system is actually how decentralized it is, though. This is very much a local and state issue. If people care about it they should tackle it at the local level. The more you centralize election systems the more vulnerable they are and the more valuable those hacks become.

ELLEITHEE: You can give more support to the states, though, to do it.

HEMINGWAY: And we have known about this for a long time. We're having warnings right now, but we've had warnings for four years or more about China trying to do the same thing. So we should be on guard against many foreign entities.

YORK: This White House meeting, if only for the optics and P.R. of this, they should have had this a long time ago. The midterms are less than 100 days away, and we've had so many accusations that the Trump administration has done nothing to try to stop Russian and other foreign meddling in these upcoming elections when in fact some of these intelligence agencies apparently have been working on this but they won't talk about it. So some sort of public sign that the president and the government are actually doing something is really overdue.

EMANUEL: Something I would like to get to quickly is the race for House speaker for the next Congress is heating up. Here we are about 100 days out. What do you make of it, Byron?

HEMINGWAY: I think it's just a healthy thing when you have races that are contested and it helps you understand more about the caucus. Kevin McCarthy is the clear frontrunner. You have a Freedom Caucus candidate who has thrown his hat in the right, and you might see someone from the left also enter the ring. In general, I think these are healthy things. You get to learn more about what issues the Republican caucus cares about, and that will help whoever is the eventual leader know how to manage the caucus.

ELLEITHEE: I think a lot of Democrats are excited to see this race between McCarthy and Jordan play out. A lot of it is going to depend on what happens in November and whether this is a race for speaker or a race for minority leader. And if Democrats win back the House I will be curious to see at what expense. When Republicans won back the house it was at the expense of a lot of moderate Democrats. The caucus got then moved to the left. If Democrats win back the House, is it by defeating a lot of freedom caucus type of candidates or more moderate candidates, and that will define this race.