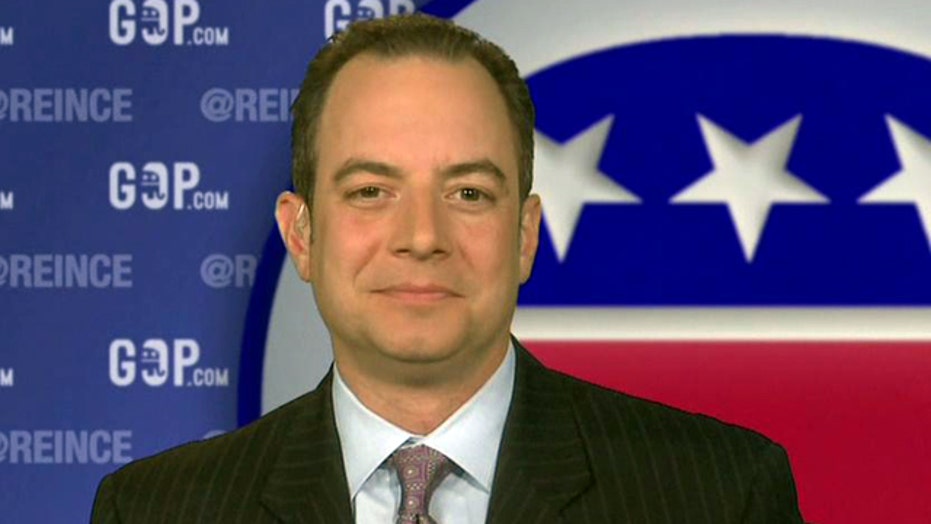 Reince Priebus on how ObamaCare is exposing the President

This is a rush transcript from "Hannity," December 5, 2013. This copy may not be in its final form and may be updated.

SEAN HANNITY, HOST: And joining me now to explain is the chairman of the RNC. Reince Priebus is with us. Reince, welcome back, sir.

REINCE PRIEBUS, RNC CHAIRMAN: Hey, thank you, Sean, for having me on. Boy, you just rattled off a bunch of problems, and that's just to name a few, huh?

HANNITY: Well, it's just to name a few, but, you know, the president challenged Republicans. I think this was another chase the rabbit, trying to divert attention scheme of his, just like the class warfare speech yesterday and just like he tried to talk about AIDS the day before. He's always trying to change the topic.

But you know, Tom Price is a Republican. He has a specific plan. By the way, it wouldn't be my plan, but it's much better than what we got. There is a plan on the table.

HANNITY: Yes. All right. But look at these numbers. We talked about the millennials, 57 percent don't want ObamaCare. Most would vote him out of office today. That was a core constituency of his.

PRIEBUS: Right, 52 percent of young people would recall the president based on this law.

HANNITY: All right, 52 -- and 57 percent don't want ObamaCare. Now, you look at another core constituency. We kept hearing after the election about the Latino vote in America. Well, look at this latest poll, this one out of Gallup. And the support of the president has gone down 23 percent among Hispanic voters. I mean, that's a huge discrepancy from where he was just a year ago.

PRIEBUS: And the reason -- no, this is not obviously a good law for the American people. But politically, the reason why this is valuable is that it's exposing the president for what he's all about. He's all about making promises that aren't coming true. And now people are getting the reality of what Barack Obama is all about in their mailbox.

I mean, the difference between this scandal and many of the others is that this is affecting millions of people personally in their bank account, now losing their doctor, losing their health care. And this is just the beginning. Just wait, Sean, until employers have the option...

PRIEBUS: ... of dumping their insurance and throwing people on these exchanges!

HANNITY: All right, but let me ask you this question because we know that the Federal Register back in July of 2010, that they knew that the individual policies -- it could be as high as 80 percent of Americans would lose them. But they also said 60-some-odd percent of small business and 45 percent of those on big business policies. Do you think the president purposely, consciously, knowingly lied to the American people? Do you think he did that?

PRIEBUS: Well, I -- yes, I think the president lied to the American people. But there's also something else in the law that's akin to a lie, and it's called gross negligence. And what that means is that when you act in such a way that you knew or should have known that it's so grossly obvious that what you said and what you did are so opposite from each other that under the law, you, in effect, intentionally lied to the American people.

HANNITY: All right, but look at the lies...

PRIEBUS: Under this president, as you know... it's crazy.

HANNITY: If you like your plan, you can't keep it, right? I estimate, and American Enterprise, Manhattan Institute and others that have studied it and experts we've had on this program say it's going to be over a 100 million Americans in the end that are going to lose their plan -- can't keep your plan. Many won't be able to keep their doctor. You're not going to save $2,500 per family per year. Most Americans are going to see dramatic rate increases.

And I got to tell you, I'm not -- I'm not going to sit here and draw up Senate rules. And this is real inside baseball, but what Harry Reid did is going to come back to haunt him because now, with 51 votes, by opening that door, what essentially he did is say to the Republican Party that with 51 votes, if you win the Senate, you can undo ObamaCare. And that's on Harry Reid, but I got to tell you, I think that's going to come back to haunt him.

PRIEBUS: And you know what? I personally think we ought to.

HANNITY: Every single poll -- I think this is very dangerous territory, not just for a president but for any politician -- is when the American people now see the president -- they don't believe he's honest. They don't believe that the president of the United States is trustworthy. And a lot of it has to do with ObamaCare and the lying.

Now, if you go back three years ago -- the president has an uncle. His uncle Omar lived in Boston. And when he was brought up on a DUI charge and was ordered to be deported, he didn't leave. And the White House was asked about him -- and The Boston Globe -- and they said, Well, he never met -- he never met -- Obama never met him.

Here's Jay Carney today. Does this add to the dishonest factor, the distrust that exists? Watch Jay Carney backtrack today.

JAY CARNEY, WHITE HOUSE PRESS SECRETARY: The president said that he, in fact, had met Omar Obama when he moved to Cambridge for law school and that he stayed with him for a brief period of time until his -- the president's apartment was ready. After that, they saw each other once every few months while the president was in Cambridge. And then after law school, they gradually fell out of touch. The president has not seen Omar Obama in 20 years and has not spoken with him in roughly 10 years.

HANNITY: He -- they said three years ago that he's never met him! I mean, is that a small thing or is that a big thing?

PRIEBUS: Well, I think -- listen, I think these all of these -- I think that's a big thing and I think all these things are huge things and it goes to the trust of this president. As you know in life, in all of life, whether it be the politics or business or just personal relationships, when you have a breakdown of whether or not someone is a person of their word or not, rebuilding that is almost impossible.

The American people are seeing Barack Obama for what he is. He says one thing and does another. He's been lying to the American people. He's been exposed. And these little lies, like, you know, lying about whether you met someone or not that's been significant in your life -- listen, those are big things because it goes to the character of the person that you're dealing with. And President Obama is proving himself not to be trustworthy on the small things and now the very big things.

HANNITY: All right, Reince Priebus, thanks for being with us. Appreciate it.