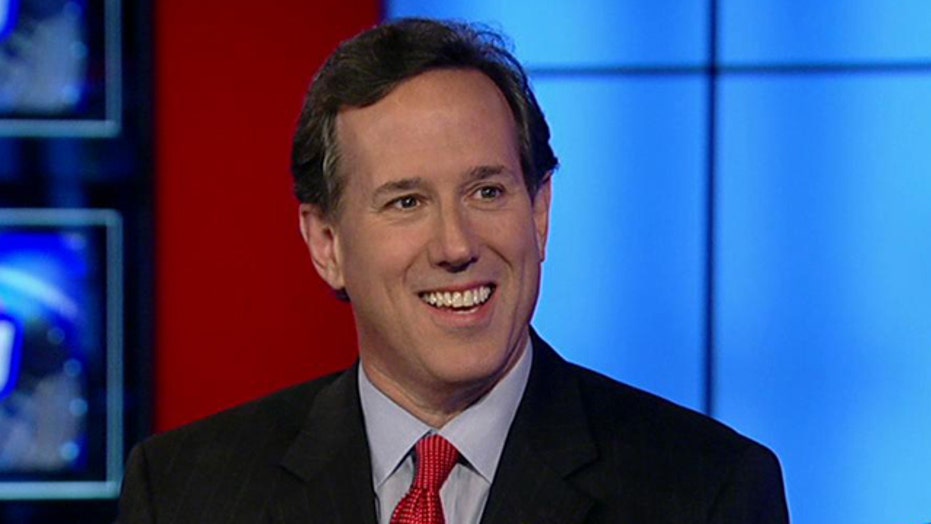 Former lawmaker on getting America back to work

This is a rush transcript from "Hannity," April 28, 2014. This copy may not be in its final form and may be updated.

SEAN HANNITY, HOST: Welcome back to "Hannity." Former Alaska governor Sarah Palin spoke at the NRA Stand and Fight rally this past weekend in Indianapolis. She got a lot of people talking after she explained how she would deal with terrorists if she were commander in chief. Take a look.

SARAH PALIN, FORMER GOVERNOR OF ALASKA: They obviously have information on plots to carry out jihad. But you can't offend them, can't make them feel uncomfortable, not even a smidgen. Well, if I were in charge --

PALIN: -- they would know that waterboarding is how we baptize terrorists.

HANNITY: Not mincing words. I would say that is the quote of the week. Joining me now with reaction, author of the brand new book "Blue Collar Conservative, Recommitting to an America that Works," Rick Santorum. How are you, senator?

HANNITY: Appreciate you being here.

HANNITY: If somebody were to kidnap your kids and you caught one of the kidnappers, would there be anything you'd do to stop to get information about where your kids are?

SANTORUM: Obviously, torture is probably not something that I would do --

HANNITY: I would do whatever it takes.

SANTORUM: I would to whatever it takes within reason, and I think waterboarding is not torture.

You're raising points in the book that are really important to me. That is I think Republican Party better get their act together, put forward an inspiring agenda. Why aren't they doing that?

SANTORUM: Look, hoping your opponent self-destructs is necessarily not a great strategy. I think that's pretty much where they are right now, and they're not putting forth a positive vision. One of the reasons I felt compelled to write this book was to put a positive vision for the folks out there who want to vote for us, but we have to show to them that we care enough to at least talk to them about where they are and how we can make life better.

HANNITY: Did you see all the labor unions that are now supporting conservatives on energy?

SANTORUM: Keystone pipeline, a bunch of other things -- yeah. I was with a guy the other day who is a labor union guy. And he was telling me, you know, my guys want to vote for Republicans, but they're out there sort of always poking at us all the time.

HANNITY: Poking at them? We want them to pay less taxes, work more. I'm saying me.

SANTORUM: I know, I know. Look, what we need to do is focus on where people are and talk about energy and manufacturing and talk about, you know, having programs so people can get skills so -- 70 percent of Americans don't have a college degree. And a lot of those folks, you know --

SANTORUM: They don't believe all these cultural changes that are going on that the left is trying to push to sort of rewrite American culture. But they see Republicans as folks who are for business, and all Republicans -- think about the three things that Republicans talked about with the economy

HANNITY: It's energy. Energy is the answer.

SANTORUM: I know. That has been our economic message. And if you're 70 percent or 80 percent of America, you say well, they are not talking to me. We need to start talking to people. Your idea, what you're doing with creating opportunities for people to get energy jobs up in North Dakota --

HANNITY: It's working. I'm getting thousands of people jobs because I don't believe the government is ever going to get it right.

SANTORUM: We have to be able to go out there and meet people where they are, stop talking macroeconomics and talk microeconomics. In this book, we lay out how to get manufacturing going, how to get people in those jobs. We also talk about the importance of marriage and the family. You know, every study that has come out on income inequality has said the most profound component is whether people are married or not. And we don't do enough to promote the benefits of marriage. We get talking about definitions of marriage instead of focusing on the importance of people getting married.

HANNITY: I watched you with Bob Shaffer yesterday. You're running. You're in. You can even announce right now. I know you're running.

HANNITY: You might as well just admit it. I already saw that you're in.

SANTORUM: There is a lot in the book I think would be a good thing for a candidate to have in 2016.

HANNITY: Good to see you. And Bella doing well?

SANTORUM: Bella is doing great. I'm just finishing up another book that will be out next year.

HANNITY: Awesome. All right, senator, good to see you. Appreciate it. I hope conservatives on the Hill read this. State governors are doing a great job.