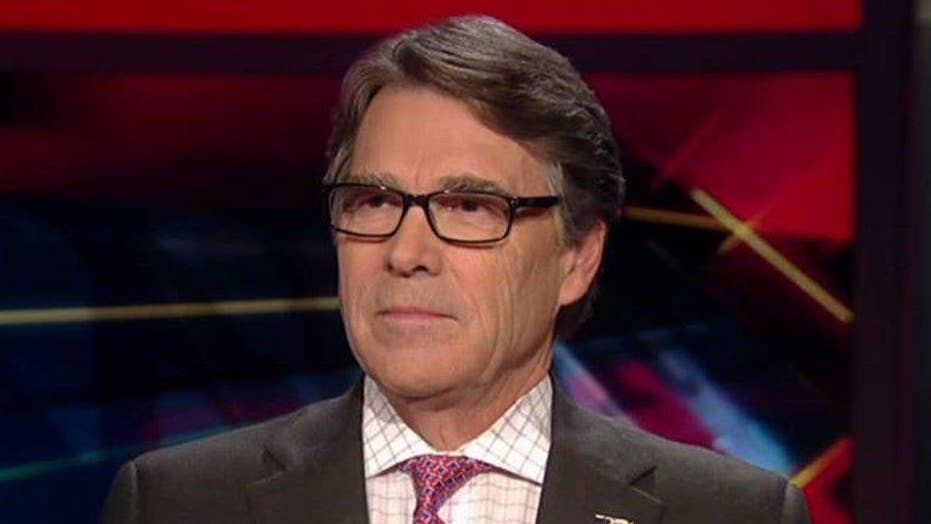 Energy secretary speaks out on regulations, energy policy on 'Your World'

NEIL CAVUTO, HOST: All right, tomorrow, we should know, and Wall Street buying again in anticipation of a big tax cut for corporations and individuals, maybe all individuals tomorrow.

Spelling that out and getting the details, well, that's the hard part, but, again, as I say, we should know.

The secretary of energy was joining me a short time ago, Rick Perry, and I asked him about the prospects for that very tax cut.

CAVUTO: All the talk right now is on a big tax cut.

And, you know, the last time Republicans tried to do something big like rework the health care thing, it kind of stumbled out of the gate. How do we know that the tax cut thing won't go the same route?

But I think you live and learn in Washington, D.C.

PERRY: This president is pretty resilient and I think a quick learner, realizing he has got to put a team together and do the governing part of this.

And taxes are never easy. But I think the appetite is there. I think the expertise is there. I think, when you look at the leadership over in the House and the Senate, Mitch McConnell, Paul Ryan, Kevin McCarthy, those individuals, I think, can coalesce around the president and deliver this for the country. And this isn't a...

CAVUTO: But the pressure is really on them, right, since the health care thing, right?

And the reason why I'm asking you this is that the president went out the gate saying, you know what? We need a big tax cut, deficits be damned. I'm paraphrasing here, Secretary. But his message was, let's not picayune this thing apart.

CAVUTO: Do you agree with that? Are you OK with a tax cut that might make deficits worse before they get better?

PERRY: Well, I don't buy into that.

And that I use the 12th largest economy in the world. Those that get up and say, well, you know, it's just not going to work and you can't grow your -- yes, you can.

I mean, my home state is a great example that you can grow your economy to the point to where you cover, and people feel really confident. The most important thing, I will suggest, even more so than tax cuts, is on the regulatory side.

And the president has been very clear about: I want to get rid of regulations that aren't doing a good service for this country or the people, what have you. Do a cost-benefit. Take those out of -- manipulate the ones that need to be manipulated, so that they do deliver, but predictability.

CAVUTO: But when you were governor, you had to make sure the budget was balanced, right?

PERRY: Predictability and stability in the regulatory climate is as important as anything.

PERRY: Yes, absolutely, do the tax cuts. People want to keep more of what they work for. And then you will see growth occur in this country like we have never seen it before, bring...

CAVUTO: Will that be enough to wipe out the debt, do you think?

PERRY: I -- well, what's the period of time you are talking about? But let's get it headed in the right direction.

PERRY: I mean, we have built these massive...

CAVUTO: But you are convinced that if it starts going down, that will be enough to at least to get people to feel like we are on our way?

PERRY: It's a good start, Neil.

In energy, in the department you head, the president has made clear, you have made clear more drilling, keep all options open.

They don't like what's coming out of your office now. What do you tell them?

PERRY: Well, I don't know what they don't like. But here is what they need to...

PERRY: Well, then we're going to go back to a country that has incredibly expensive energy costs.

It's going to hurt the poorest in this country worse. We are not going to be able to serve the Third World countries. There's 600 million people in Northern Africa, basically, in the continent of Africa that don't have power at all.

And you're going to have to use fossil fuels. Listen, one of the reasons we were able to drive down our nitrogen oxide, our sulfur dioxide, our carbon dioxide levels in the state of Texas, while we had the fastest growth of any state in the nation, was because we were able to use LNG and transition away from old, less efficient plants. What is wrong with doing that?

CAVUTO: All benefited when you were in Texas, right?

CAVUTO: So, how do you disavow environmentalists of the notion this president doesn't care about wind or solar or anything?

PERRY: Well, I think you look at who he chose to be his energy secretary for one thing.

We had the largest expansion of wind energy in the whole country. Texas produces more wind energy than more -- all but five other countries. I mean, it's a fascinating thing.

CAVUTO: Then why are all these people who are marching all over the world, right...

PERRY: I don't think they are paying...

CAVUTO: Those who are arguing, like, it's for science now, what do you think of this?

PERRY: Well -- listen, well, if science is what you want to stand up for, why weren't you down at Richmond, Texas, a week-and-a-half ago when we opened up the largest in the world carbon sequestration project, capturing those carbon, taking 90 percent of the CO2 out of the air, shipping it over to an oil field, where we are using it for enhanced oil recovery?

I mean, jobs are being created. The economy is being helped substantially. And the environmental is benefiting from it. Wasn't that the goal?

CAVUTO: So, it's good for you.

Let me ask you. I mean, you took this job, and you are in this position now, and you and now President Trump were not getting along famously in the beginning. You know, you had some strong words for him, he for you.

PERRY: We were competitors.

CAVUTO: Yes. It got nasty. I mean, what happened?

PERRY: I said some harsh things.

CAVUTO: And he of you.

PERRY: And, at the end of the day, he was our nominee, and I'm on a team. And I understand that.

And this was easy for me. Donald Trump, Hillary Clinton, their policies? Donald Trump was an easy person for me to help.

CAVUTO: Are you troubled by some of these polls that show the president's approval rating is still low?

PERRY: I have seen low approval ratings while I was a governor as well. So, the point is, go lead.

CAVUTO: But do you think we fixate too much on the 100-day stuff?

CAVUTO: Do you think the media is fair to the president?

PERRY: Not particularly. But...

CAVUTO: Do you buy the fake news stuff?

PERRY: We know that going into it, that the media is not going to be relatively fair.

CAVUTO: He calls that fake news. Do you?

PERRY: There's problem some of it fits into that category.

CAVUTO: Who is the worst, in your opinion?

PERRY: Don't get me in that alphabet soup of trouble.

Stepping back from this, I'm wondering, Secretary, do you -- if something were to happen with this tax cut thing, and either it doesn't go through, where there are conservatives in the party, sir, who say, wait a minute, we don't want to make the deficit worse, your argument notwithstanding that that could create revenue, they really -- Republicans can't afford a fumble on this, right?

PERRY: Well, again, I think artificially drawing a line, Neil, that you have just done -- this 100-day thing is a great example of it.

PERRY: I think it's going to pass.

I think we're going to see a success here. And I think health care reform will pass as well. So, saying, you know, if you don't get it done by this particular time, then it's a great failure, I don't buy into that.

CAVUTO: But it's more problematic if it gets pushed to next year, right?

PERRY: Well, I don't know that.

I mean, Americans will judge you on what you get done. They're not judging you on, did you get it done in the first 100 days?

CAVUTO: The only reason why I mention next year, Secretary, is that it's an election year and it's tougher to get stuff through then.

PERRY: I understand that.

But, again, I don't get tied up in knots about not making a predetermined, somebody's line in the sand out there that you have got to get this done before you step across it.

PERRY: So, I think he is going to get a good, substantial tax cut put into place. I think we will pass reform of our health care system and headed in the right direction.

CAVUTO: So, you are still optimistic.

CAVUTO: Barack Obama is back in the press right now. He spoke yesterday.
He is going to be speaking again.

And we're told, in the fall, Secretary, he is going to speaking to Cantor Fitzgerald, a Wall Street outfield, a $400,000 speech.

CAVUTO: What do you make of that?

PERRY: Well, listen, we took a chance on a relatively young, inexperienced United States senator who had very little experience.

We're paying a price for that. Donald Trump, the Congress that's in there now, this Cabinet that Mr. Trump has put together, we're having to deal with that. And, you know, the president -- President Obama, he can go make all the speeches he wants.

CAVUTO: Well, a lot of Republicans seized on this, are you kidding me, the same president who bashed Wall Street, who said that they were greedy, that they went too far, that they created the housing crisis, and now he is going to pick up a $400,000 check speaking to a brokerage house? Your thoughts?

PERRY: I never got confused that Barack Obama was not a nimble politician.

CAVUTO: All right, Rick Perry, the energy secretary of the United States.