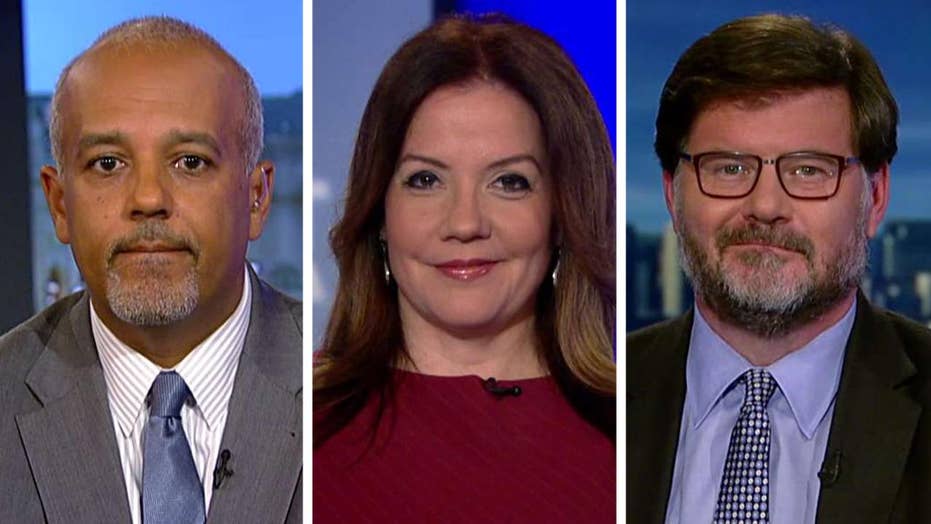 This is a rush transcript from "Special Report with Bret Baier," October 23, 2018. This copy may not be in its final form and may be updated.

OK, I want to take a look at some of these full screens here. The early voting totals, you heard from Mike, total number of ballots cast as of today, more than 7.5 million ballots. A lot more people are voting early. And this is the NBC data analytics that Mike referenced. These are states where the early voting base on affiliation, party affiliation, Arizona, Florida, Georgia, Indicate, Montana, Nevada, Tennessee, Texas, and those are showing GOP turnout in a place like Tennessee, 63 to 30. Mo, when you look at that what do you see?

MO ELLEITHEE, GEORGETOWN INSTITUTE OF POLITICS: I see a close election coming our way. And I think there is a natural tightening of races that typically happens in the final weeks.

I haven't looked at all those states in detail. Florida is a state I know a little bit about and have done some work in over the years. And if you look at where they are today, heading into today, compared to this point four years ago in the last midterm, the Republicans last time had about a nearly 9-point advantage in the early vote coming into today. Right now they have nearly a 4-point advantage coming in today.

So that shows that Democrats are narrowing the early vote gap in a major state like Florida which there is a lot of seats at play. And most people protect the Democrats will take the lead in the early vote after today's votes are counted.

But let's make no mistake. Anyone on the Democratic side that thinks there's going to be a blue tsunami needs to check their expectations. I think Democrats are still poised to take back the House but by a narrow, narrow majority. It's going to be more like a mini-wave.

MOLLIE HEMINGWAY, THE FEDERALIST: I don't read too much into early voting. I remember in 2016 we were told that Hillary had a lock on Florida based on early voting numbers, and she ended up not taking Florida. So it is interesting that a lot of people are voting early, but I don't know how much we can take from it. But there is no question that the narrative has changed from there is going to be a takeover of the Senate and the House. Right now Democrats are on track to lose seats in the Senate. And the House, which was always assumed to be going to the Democrats, the average predicted number of seats that they will take is 25. Democrats need 23 to have a majority in the House. Well, 25 is a pretty narrow. That's just average. It doesn't take much for them to go either way in that direction. So anyone who says that it definitely is going to be a Democratic takeover of the House, I think they're making the same mistake they made in 2016.

BAIER: The other thing that's amazing is the amount of spending on this midterm. If look at the stats here back to 1998, $1.6 billion. Now it is up to $3.7 billion, and we have 14 days from today, already spent on these midterms. That's astonishing.

JONAH GOLDBERG, NATIONAL REVIEW: Yes, it just shows you the intensity. And one of my bugaboos is people who think that low voter turnout is a sign of democratic, societal decay or whatever, and poor civic virtue. Most people going to the polls are going to the polls because they are angry, one way or the other. It doesn't seem to be that high voter turnout is a sign that everyone is feeling the other party or politics or whatever.

I think that what I see from a lot of that data is that it is clear, particularly in those swingy states, that Trump is an unalloyed benefit for Republican Senate candidates because it brings out to rural voters, people not in these contestable Congressional districts in ways that has put them over the top. Plus, the backlash of the Kavanaugh thing.

What is interesting to me about the House races, and I still think the Democrats are going to take back the House but probably narrowly. They only need to win one out of the three of the competitive prices. But what's interesting is that in the competitive races, the generic ballot has basically evened out. The Democratic advantage in the generic ballot takes into account all of these intensely blue parts of the country where it doesn't matter whether they have a huge advantage or not. And the actual races where it is close, it is much more of a race. And I still think you'd have to bet, just not maybe bet a lot that the Democrats do it, but it's going to be close.

BAIER: And a lot of these polls and the ones tracking some 75 races in the House that really are on the edge say it is tight on some of those swing states. Let's take a listen to the president on the issue of this caravan today.

PRESIDENT DONALD TRUMP: We cannot allow our country to be violated like this. I have very good information. I spoke with border patrol this morning, and I spoke to them last evening, and I spoke to them the day before. I speak to them all the time. And they say, and you know this as well as anybody, over the course of the year, over the course of a number of years, they have intercepted many people from the Middle East. There's no proof of anything. There's not proof of anything, but there could very well be.

BAIER: Talking about the Middle Easterners being a part of that caravan. The vice president said he talked to the president of Honduras and said the caravan was organized by leftist organizations, financed by Venezuela. That's Vice President Pence in the Oval Office. Clearly the administration sees political gain in talking about this.

ELLEITHEE: I think where it could help him the most and help Republicans the most are in the Senate seats that are at play where turning out the Republican base in rural areas can help in a statewide election. In a lot of the suburban districts where the most competitive House races are, I'm not sure that is going to work.

BAIER: I don't see a lot of Democrats piping up on the other side, saying humanitarian issues. There's not a lot of speaking out about this caravan issue from the left, is there?

ELLEITHEE: I think what you are doing is you're hearing a lot of Democrats point to the fact that this is a failure in the broader immigration discussion, right, that these are people who are leaving for humanitarian reasons and we're not doing anything at the source. But I also think what you are seeing is a lot of Democrats pointing out the fact that this president is just not being honest with some of this stuff. He's just not being honest when he's talking about Middle Easterners sneaking into the middle of this caravan, and point that out. And that's important because in a lot of the suburban House districts, where people have always been a little bit anxious about the president's personality, about his persona, this adds to their anxiety. This adds to their frustration as much as it helps him with his base, which had been a little bit depressed up until the past couple of weeks. And so in these statewide races, states like Tennessee, states like Missouri, states like North Dakota, I think could be helpful to him there.

HEMINGWAY: I think there is a lot of room for disagreement on the immigration debate. And you have people who cover the spectrum there. But the idea that there aren't national security concerns with immigration policy or economic concerns with immigration policy, I think that is actually just something that a lot of Americans agree on. And when they see something like this, and I can't imagine a better visual for Donald Trump's argument that we need to have secure borders and orderly immigration policies and understanding of national sovereignty that does not allow just literally the flooding of people over the borders.

I want to play one a soundbite very quickly, Jonah, and that is how powerful this issue is for Australia. In 2001, John Howard was running for prime minister. They had boats coming from Indonesia. He turned them around. Take a listen.

JOHN HOWARD, AUSTRALIAN PRIME MINISTER: It is also about having an uncompromising view about the fundamental right of this country to protect its borders. It's about this nation saying to the world, we are generous, openhearted people, taking more refugees on a per capita basis than any nation except Canada. We have a proud record of welcoming people from 140 different nations. But we will decide who comes to this country and the circumstances in which they come.

BAIER: He ended up turning that election around and winning based on that issue alone.

GOLDBERG: One of the things I am fascinated by is, and I wrote about this a lot in my book, the industrial advanced nations out there, the one that does not have a big populism issue roiling its politics -- Japan, because they have very limited immigration. It's hurting their economy, and it has all sorts of arguments about it on both sides. But the political science is fairly settled. It is not necessarily all about bigotry. But when you have large waves of immigrants coming in and there is a perceived sense of lawlessness or the culture being moved in a direction that people don't like, it roils politics in ways that few other issues do.

Brexit, if you look at the polling data closely, it was very much about issues of immigration and the sense of the English culture was being lost. And Donald Trump plays into that. That this caravan thing is like manna from heaven for Donald Trump in at least for the Senate races. He says, the Democrats must be paying for it. The RNC should be paying for it, it is so good for Donald Trump and for the Republican argument.

BAIER: We will see how it goes 14 days from now.